Tomatoes or cream? Neither? There are a lot of opinions. 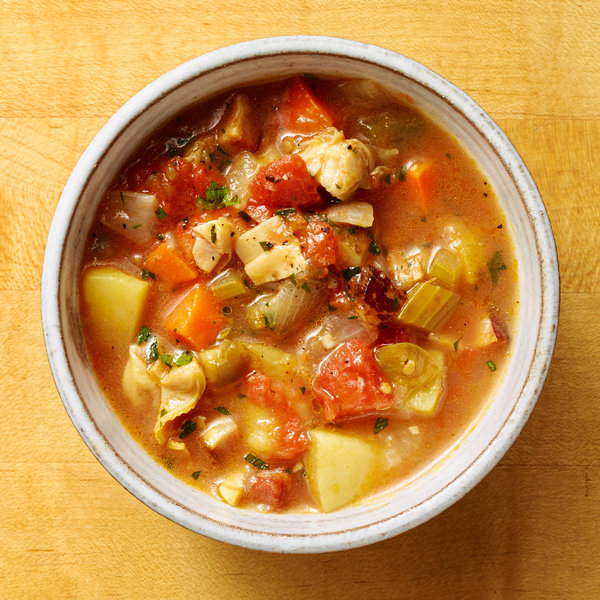 Good morning. Manhattan clam chowder is among the most divisive of soups. There are those who love it for its tangy bite: acidic tomatoes against the salinity of the clams, with a clean, vegetal bass line of green peppers and celery. Others demur: They don’t like tomatoes with their seafood, or they don’t like green peppers with any of their food — occasionally both. (Craig Claiborne, once The Times’s food editor, called Manhattan clam chowder “horrendous.”) I generally make a cream-based version myself, or the clear variety that’s popular along the southern coast of Rhode Island.

But I had a cup of Manhattan at The Dock in Montauk Harbor the other day that restored my faith in the excellence of red-cooked chowder, and it got me fiddling with my own recipe for the dish (above), losing the carrots and bacon, amping up the thyme, and increasing the number of clams. It made for a fine dinner on a cool night at the top of fall, at least in the Northeastern part of the United States, and I thought maybe you could give it a try this week? (If you’re not cooking along the Atlantic coast, this creamy corn and poblano soup might be easier to pull off, or this mushroom miso soup.)

At some point, too, you could make Melissa Clark’s latest, a beautiful skillet chicken with silky red peppers and green olives. (As Melissa suggests, I like pulling the chicken at the end and reducing the sauce a little, so it gets a little stewy and sticky.) Or you might prefer this spicy butternut squash pasta with spinach, a vegetable-packed pasta casserole from Yasmin Fahr. (In a similar vein but less aggressively cheesy and pasta-forward: Melissa’s roasted cauliflower with pancetta, olives and crisp Parmesan.)

I don’t know if you’ll cook any of these tonight, of course. Cooking on a Wednesday can feel more like a chore than recreation or joy, I’ve found. For some it’s a night for takeout, for quick pantry meals, for refrigerator clean-outs like whatever-you-got fried rice. Whichever you choose, it’s important not to judge yourself. You cook a lot. You’ll keep cooking a lot. You’ve just got to get through the middle of the week!

And when you do? Start a meal with onion sandwiches, then serve a big platter of chicken Vesuvio and snickerdoodles for dessert.

There are thousands and thousands more recipes to consider cooking tonight or in coming days waiting for you on New York Times Cooking. Go take a look at them and see what makes you hungry. Then save the recipes you like. Rate the ones you’ve cooked. And leave notes on them, either for yourself or for the benefit of your fellow subscribers. (Yes, you need to be a subscriber to do all that. Subscriptions support our work. They allow it to continue. If you haven’t already, I hope you will consider subscribing today.)

We will be standing by to help if anything goes sideways along the way, either with your cooking or our technology. Just write to us at [email protected], and someone will get back to you.

Now, it’s nothing whatsoever to do with frico or eggs Kejriwal, but this is a fascinating look at why we’re so freaked out by spiders, by Zaria Gorvett for the BBC.

There’s new fiction from Thomas McGuane in The New Yorker this week, “Not Here You Don’t.”

And A. E. Stallings has a new poem in The London Review of Books, “Peacocks.”

Finally, new music to play us off, courtesy of the Playlist team of The Times: Tainy, Bad Bunny and Julieta Venegas, “Lo Siento BB:/.” Listen to that nice and loud, and I’ll see you on Friday.