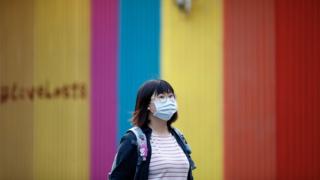 Taiwan is seen as one of the few places in the world which has successfully stemmed the spread of the coronavirus without resorting to draconian measures.

But despite its efforts, it is still effectively locked out of membership in the World Health Organization (WHO) due to its complex relationship with China.

This all exploded over the weekend when a top WHO official appeared to avoid questions about Taiwan in a TV interview that has gone viral, attracting criticism and even accusations of bias.

On Saturday, Hong Kong broadcaster RTHK aired an interview with Bruce Aylward, the WHO assistant director-general, who spoke to journalist Yvonne Tong on a video call.

In the segment, Ms Tong asks if the WHO would reconsider letting Taiwan join the organisation. She is met with a long silence from Mr Aylward, who then says he cannot hear her and asks to move on to another question.

Ms Tong presses him again, saying she would like to talk about Taiwan. At this point, Mr Aylward appears to hang up on her.

When the journalist calls Mr Aylward again, she asks if he could comment on Taiwan’s response to the coronavirus.

His last line appeared to mirror China’s stance on Taiwan, which is that the island is a breakaway province. Taiwan, however, considers itself an independent country.

What is Taiwan’s relationship with the WHO?

Aylward’s reaction was widely seen as indicative of the awkward relationship Taiwan has with the WHO, which it is not a member of.

WHO membership is only given to countries that are members of the United Nations – which does not recognise Taiwan – or whose applications are approved by the World Health Assembly.

What this means is that Taiwan has been excluded from emergency meetings and important global expert briefings on the coronavirus pandemic. Taiwanese official Stanley Kao has also said the island has been denied permission to attend the World Health Assembly’s annual meetings in recent years.

It also means the WHO lists Taiwan’s coronavirus statistics together with China’s, a move Mr Kao says denies the world of accurate and timely information on the pandemic.

The exclusion, coupled with the WHO’s repeated praise of China’s response to the outbreak – which public health experts have criticised – has led some to accuse the organisation of political bias towards China, a major contributor to the organisation.

The WHO is far from the only global body that excludes or does not officially recognise Taiwan – other major examples include the International Olympics Committee and the International Civil Aviation Organization.

But the BBC’s Cindy Sui in Taipei says that of all these groups, the WHO is perhaps the most important to Taiwan, which prides itself on having one of the best healthcare systems in the world.

The island previously enjoyed good relations with Beijing, and in the past was an observer at the World Health Assembly, but it lost this status in recent years as tensions have increased between Taipei and Beijing.

Why is Taiwan’s exclusion a problem?

Taiwan consistently raises objections every time it is excluded from a global body, saying it is unfair and discriminatory.

This time it has made the same point, adding that it should not be left out at a time where global cooperation is needed more than ever. Earlier this month, Taiwan accused the WHO of ignoring it when the government asked about person-to-person transmission at the very start of the outbreak in China, which it said put lives at risk.

“We hope through the test of this epidemic, the WHO can recognise clearly that epidemics do not have national borders, no one place should be left out because any place that is left out could become a loophole… any place’s strength shouldn’t be neglected so that it can make contributions to the world,” said Taiwan’s health minister Chen Shih-chung at a recent press conference.

Taiwan has also pointed out that it learned many lessons from managing its coronavirus outbreak which could be shared with the world. The island has been praised for its swift and decisive handling of its epidemic, which has been relatively controlled and has seen few deaths.

The measures included drastically cutting inbound flights from China and imposing quarantines on travellers early on, which experts say was key in stopping the spread in the community, as well as strict surveillance measures on those in quarantine.

Following Mr Aylward’s interview, the WHO said the question of Taiwanese membership was not for its staff to answer, saying that it is instead “up to WHO member states”.

It also said it has been working with Taiwanese health experts and authorities to ensure speedy information flow and to share best practices.

Our correspondent says that while this is true, and Taiwan can access WHO information shares with members and share expertise through designated communications channels, it cannot communicate as efficiently or be heard as clearly as a member would be.

On Monday, President Tsai Ing-wen replied to the WHO statement saying she “hoped that all countries after experiencing this outbreak would better understand Taiwan’s capabilities and areas of contribution, to seriously consider Taiwan’s participation in the global response to the pandemic”.

“Taiwan’s stance has always been clear: it has the capability and willingness to work with countries in health protection, and is also willing to share useful experiences,” she said.

But the foreign minister Joseph Wu has been less diplomatic, and over the weekend reposted Mr Aylward’s interview in a tweet, saying: “Wow, can’t even utter ‘Taiwan’ in the WHO?”

Others have also lambasted Mr Aylward and the WHO following the interview.

China is yet to officially comment on the issue, but on social media network Weibo many Chinese appeared to cheer Mr Aylward’s response.

Beyond the political furore, Taiwan and China continue to battle the virus. Both are among a number of Asian locations facing a second wave of infections caused by returning residents from other regions such as Europe.

As of Monday, Taiwan with a population of about 24 million people has had more than 300 confirmed cases, of which the vast majority are imported cases, and only five deaths so far.

Other Asian places which have kept their outbreaks under tight control, such as Hong Kong and Singapore which are much smaller, have seen far higher rates of infection, though they have also conducted more extensive testing.