Kick things off with Dorie Greenspan’s age-old recipe for chicken in a pot. 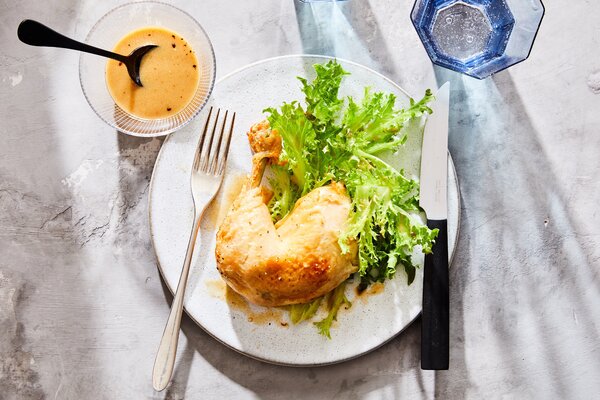 Good morning. Did you miss me? I spent more than two weeks not writing newsletters, not editing recipes or thinking about stories to tell, not checking in with correspondents, not clearing my inbox, not doing much of anything productive besides cooking for my family, chasing fish in the surf, chopping aged maple and reading books in the shade. It was a glorious break from a routine I generally treasure, and to which I return refreshed and excited, eager for what’s next.

And it’s the weekend already! I might kick it off with Dorie Greenspan’s latest, an age-old recipe for chicken in a pot (above). She’s been perfecting it since she decamped for Paris at the age of 19 and got herself invited for dinner by a stranger, who served a similar dish that, she wrote for The Times this week, she’s carried around in her head for decades, “calling it up as a kind of culinary yardstick each time I roast a chicken.”

That, alongside a salad dressed with a vinaigrette warmed with pan juices from the bird, and a torn baguette? Late-summer perfection, I think, especially in advance of a Labor Day weekend that calls for lots of tomatoes, even more corn, plenty of grilled hamburgers and sausages, potato salads and glasses of planter’s punch.

But not only that. I want to try Eric Kim’s new recipe for zucchini panzanella, a riot of flavors, and Alexa Weibel’s new recipe for a jalapeño-ranch chopped salad, too. I want a spread of cold vegetables to serve with green dip, maybe some cod cakes made with whatever fish I can find at the market. And while I’m at it, I’d like some grilled oysters with hot-sauce butter, if only because they taste to me of the season: summer giving way to the chill of autumn. (This is especially true if you shuck the oysters instead of grilling them, and daub them with the hot-sauce butter before serving.)

And for dessert? I could absolutely see my way to making a peach pie at some point in the next couple of days. And a shortbread plum tart with honey and cinnamon. And maybe some giant crinkled chocolate chip cookies for snacking along the way.

There are tens of thousands more recipes to make this weekend waiting for you on New York Times Cooking, at least once you’ve taken out a subscription. (Subscriptions support our work. If you haven’t done so already, will you please subscribe today?) And you can find further kitchen inspiration on social media: We’re on Instagram and YouTube, and post news and criticism to Twitter. (I’m out there too: @samsifton.)

Now, it’s nothing to do with rum cake or shrimp scampi, but my excellent colleague Michael Cooper recently put me on to Mick Herron’s British spy thrillers — set in the backwater of the fictional Slough House, in the borough of Finsbury, London — and I’ve just devoured the first six. Please join me in feasting.

Also for your consideration during this last true beach-reading weekend of the year: “The Three-Body Problem,” by Cixin Liu; “The Maine Farm Table Cookbook,” by Kate Shaffer; and, though it’s not out until the 14th, “Harlem Shuffle,” by Colson Whitehead. (Here’s Bob and Earl with the soundtrack, from 1965.)

Finally, and I’m woefully late to it, but you should really read Holland Cotter’s review of the Titian show at the Isabella Stewart Gardner Museum in Boston, “Can We Ever Look at Titian’s Paintings the Same Way Again?” That’s something to think about while you’re cooking. I’ll be back on Sunday.