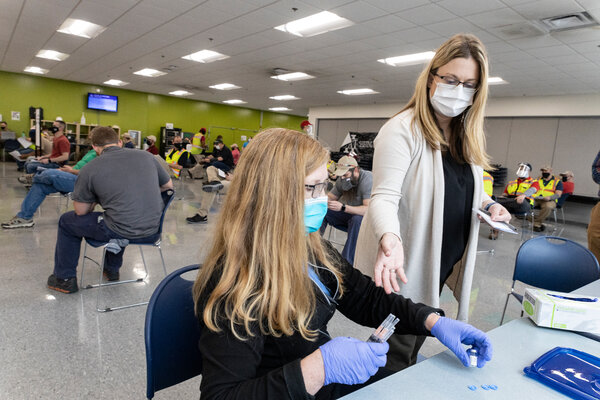 There are roughly 380,000 West Virginians in that age group, many of whom have already gotten at least one shot, but Mr. Justice said he hoped the money would motivate the rest to get inoculated, as “they’re not taking the vaccines as fast as we’d like them to take them.”

The state will use federal funds from the CARES Act to pay for the bonds, Mr. Justice, a Republican, said at a news conference, adding that he had “vetted this every way that we possibly can” to ensure that the unconventional use of the funds was allowed.

The bonds will be also be available to anyone in that age group who has already been vaccinated, Mr. Justice said.

West Virginia has the 16th highest rate of new coronavirus cases per person among U.S. states and ranks 12th in hospitalizations, according to a New York Times database.

Mr. Justice said the state needed to stop the virus “dead in its tracks,” and that if it did, “these masks go away, the hospitalizations go away, the death toll and the body bags start to absolutely become minimal.”

Earlier this year, at the start of the country’s vaccination effort, West Virginia had stood out for its success in vaccinating its residents. At one point, it had administered second doses to more of its population than any other state; it was also behind only Alaska for the percent of its residents that had received a first dose.

But now West Virginia is fallen behind, ahead of only nine states for the portion of its residents that have had a first dose, according to a New York Times database tracking vaccines.

Mr. Justice said that young West Virginians could “always stand an extra dose of patriotism.” He urged them to “accept that wonderful savings bond” — which will allow the recipient to retrieve the $100, plus interest, at a later date — adding, “I hope that you keep it for a long, long, long time.”