A Chinese defector has revealed to Sky News how Uyghur detainees are transported in their hundreds on packed prison trains, along with details of torture and deaths inside re-education centres in Xinjiang.

The man, who says he served as a police officer in Xinjiang and asked only to be identified by the name Jiang, told Sky News of the grim conditions on board the trains.

“We gather them together, put hoods on their head, two people handcuffed together, to prevent them from escaping,” he told Sky News.

Jiang said that freight trains were used to transport Uyghurs who had travelled to other parts of China back to Xinjiang. 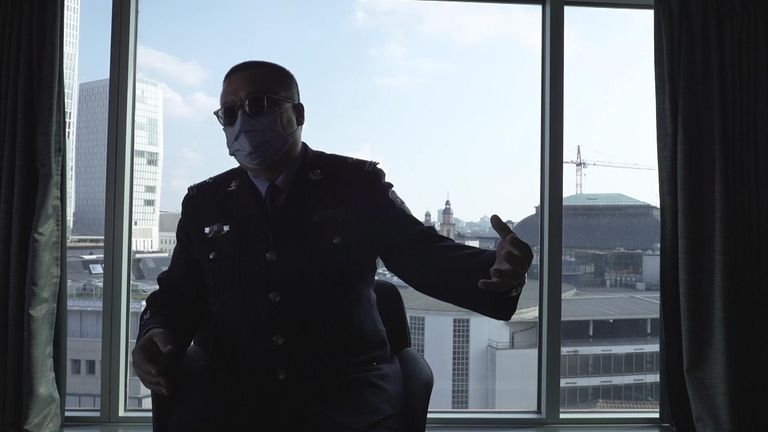 Some 500 detainees would be transported at a time from freight stations, with more than 100 prisoners to each carriage, he said. Two policemen would be assigned to each prisoner.

“During the train transportation we do not give them food,” he said.

“Only bottle caps are allowed to be used for drinking water.

“They are only allowed bottle caps to drink water – to moisten their lips.

“To keep order, we don’t let them go to the toilet.

“They reach their destinations in two days. They reach Xinjiang.” 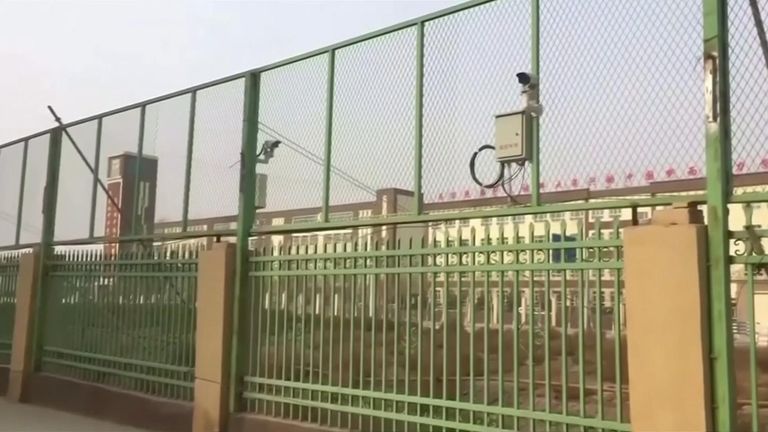 Drone footage released in 2019 showed apparently Uyghur prisoners being unloaded from a train – blindfolded and shackled, their heads shaved.

Jiang said that the video most likely showed prisoners being transferred from various detention centres to a larger central facility, because of their different uniforms.

Jiang told Sky News he had served as a soldier before working as a detective in a local Public Security Bureau.

He provided extensive documentation of his credentials, including pictures, videos, police graduation and registration certificates, and other official documents. The specific details he alleged are impossible to verify.

At a news conference, Elijan Anayat, a spokesperson for the Xinjiang government, told Sky News that Jiang’s allegations sounded “too fake… it is not possible that anything he describes could happen”. 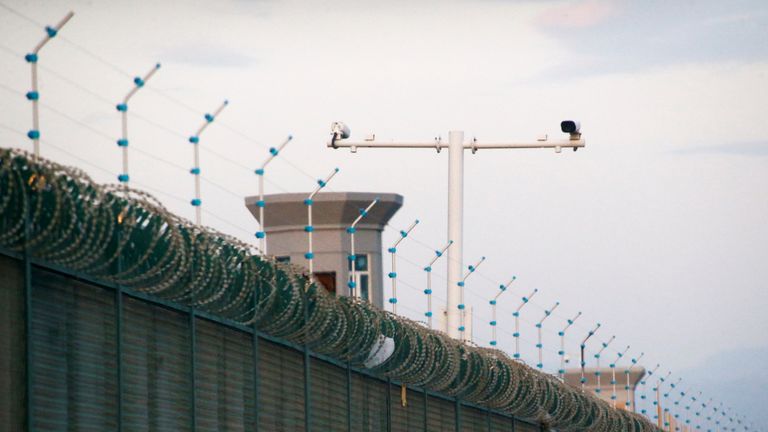 Sky News asked the Chinese government for comment on Jiang’s allegations but did not receive a response before publication.

It has previously described accusations of human rights abuses in Xinjiang as “the lie of the century” and insisted that people in Xinjiang live happy lives.

Jiang’s testimony contradicts that. Evidence from those who worked for the Chinese state in Xinjiang is extremely rare. 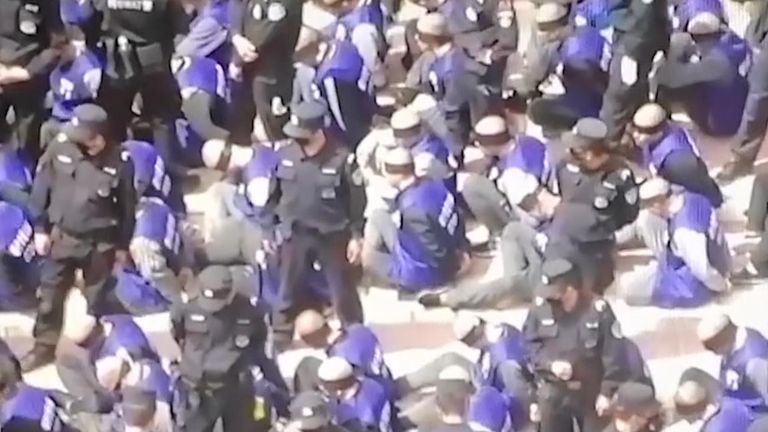 He described the brutal tactics used by police and camp guards.

“In cases related to politics, jeopardising the regime, cases involving overthrowing the regime – you’re allowed to beat people,” he told Sky News. “It’s ok, to make them turn in other people’s names.”

“You use various methods to put pressure; two people use sticks to weigh down their legs; tie him up and trample their arm; shackle their hands, pour cold water – put a water pipe into their mouth and tie them up,” he added.

“How to say, under this kind of management in the re-education centre, beating somebody to death, for sure, it happens.” 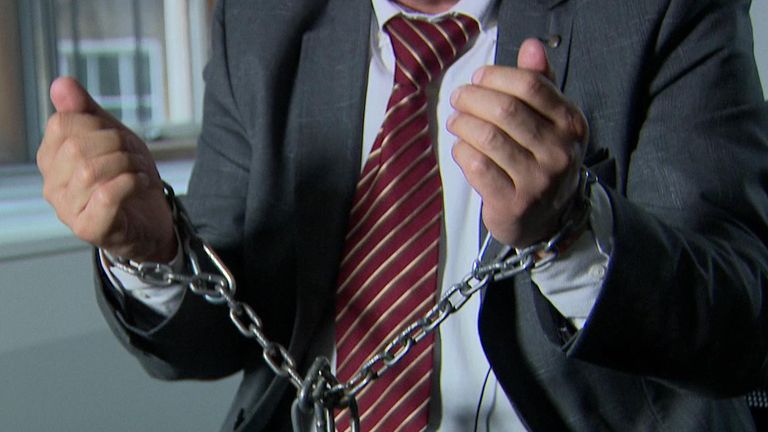 “If accidents occur, it’s normal that some people die. That’s just how you get used to saying it. Please do not blame me.

Jiang said he usually worked in criminal investigation departments elsewhere in China but was dispatched to Xinjiang as part of an “Aid Xinjiang” programme which involved tens of thousands of armed police and ordinary officers being transferred to the region. 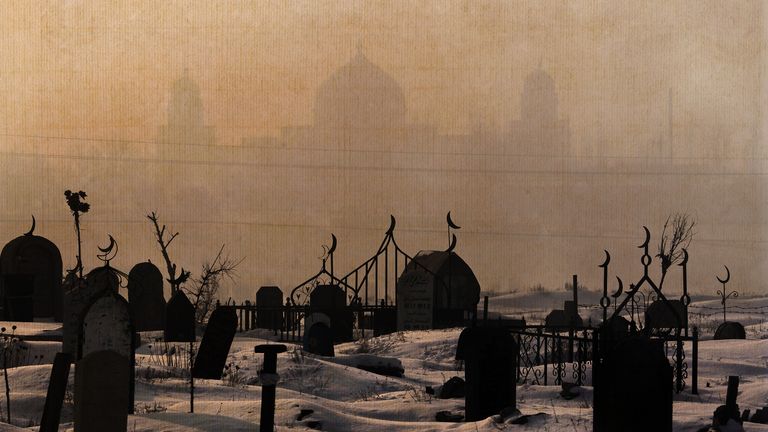 He told Sky News that Xinjiang “was in a state of wartime control” when he was posted there in 2018.

“When I got there, more than 900,000 people had already been detained for numerous petty reasons like saying something wrong. They had been sent to the re-education centres to be controlled.” 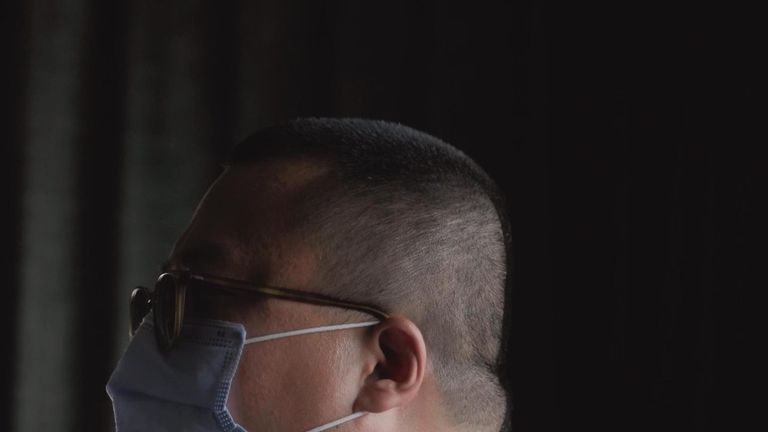 He said that people in Xinjiang lived under constant surveillance, physically and digitally.

Grounds for suspicion and detention included differing opinions on the government, appealing to higher authorities for help, or even not selling alcohol and cigarettes, he said – all could be considered “ideological issues” justifying re-education.

Jiang drew a distinction between those sentenced to prison and those sent to re-education centres.

“Those who actually contacted other people and planned to rebel, they can be sentenced. 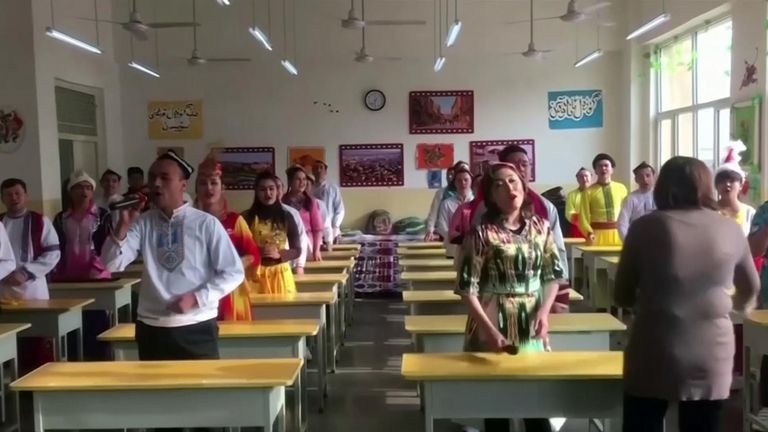 “But in people in the re-education centres are not severe enough to be sentenced.

“They have problems with their thoughts.”

“They do different things which can make money, but nobody wants to do,” he said. 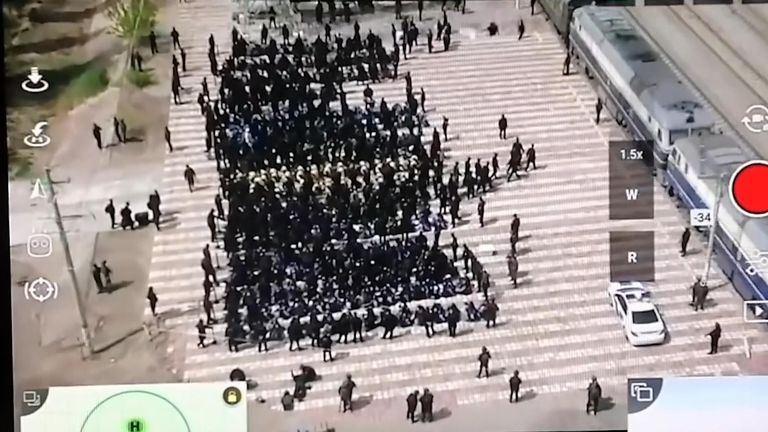 “If one official says that they need to work nine hours, the head of the re-education centre might think, if I make them work two hours more, I can make more money.”

Jiang left China in 2020. He said he was already disillusioned by Communist rule before he arrived in Xinjiang.

He said: “The leadership says very good things on stage: ‘I’ll serve the people! Let’s do our best!’ But offstage, in reality – corruption. They accept bribes every day, they corrupt state property. It’s reached a degree you can’t imagine.” 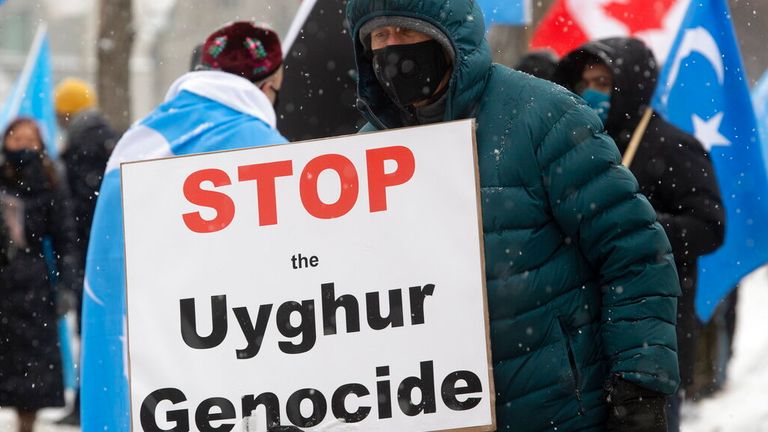 “My values collapsed. One’s values about what is right and what is wrong.

“It’s not betraying the motherland, I’m just against the corrupted class.

“I’m not afraid of the danger. I have seen much life and much death. I have seen many dead people. It’s a way for me to free myself.”