Court will not hear appeals of men convicted of beating DeAndre Harris after the 2017 far-right Unite the Right rally. 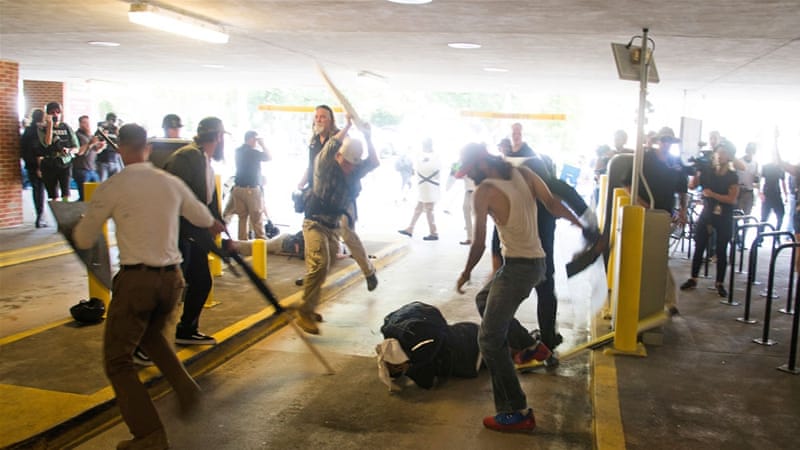 The Supreme Court of Virginia has denied the appeals of two men convicted over the brutal beating of a Black man in a Charlottesville parking garage on the day of a violent white supremacist rally.

The court denied Jacob Scott Goodwin’s petition for appeal on Wednesday and denied Alex Michael Ramos’s petition for appeal in early May, according to Virginia Attorney General Mark Herring’s office. Both were convicted of malicious wounding for their roles in the 2017 beating of DeAndre Harris, which was captured in photos and videos widely shared online.

Goodwin was sentenced in 2018 to serve eight years in prison and Ramos was sentenced to serve six for their roles in the attack by a group of men. Harris was punched and hit with weapons and left with a spinal injury, a broken arm and head lacerations that required eight staples.

Prosecutors said Ramos hit Harris in the back of the head and bragged about the attack on Facebook.

Hundreds of white supremacists gathered in Charlottesville in August 2017 in part to protest against the planned removal of a statue of Confederate General Robert E Lee.

They clashed with counterprotesters during a day of violence in which a white supremacist rammed his car through the crowd of people, killing 32-year-old Heather Heyer.

“The violence, mayhem, injury and death caused at the hands of the racists and white supremacists who descended on Charlottesville for the Unite the Right rally can never be forgotten, but we can make sure that the individuals who broke the law or incited violence are brought to justice,” Herring said in a statement.

Two other men were also charged and sentenced to prison for the attack on Harris.

Harris was also charged with assault after Harold Ray Crews, a member of the white nationalist League of the South, alleged he was injured by Harris.

The attack was alleged to have taken place shortly before Harris was beaten by the mob.

A Charlottesville court found Harris not guilty in March 2018. The ruling was met with support by local organisers.