Critics say the new law would infringe on Hong Kong’s autonomy and the civil liberties of its residents. 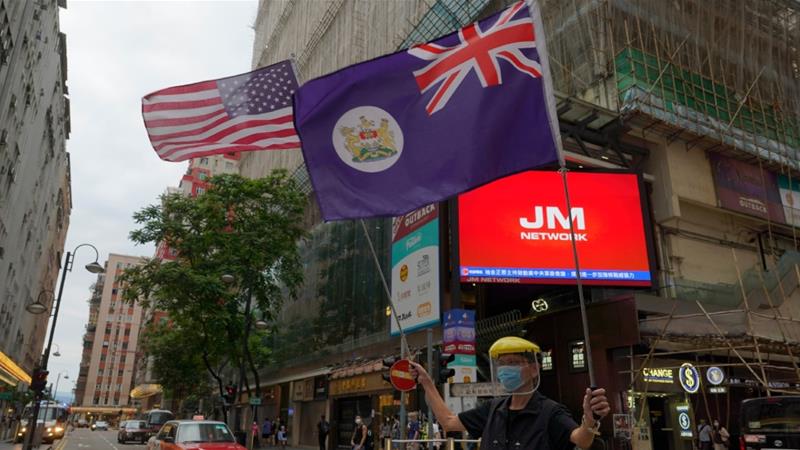 China’s proposed national security legislation for Hong Kong could lead to US sanctions and threaten the city’s status as a financial hub, the White House has said.

Beijing, meanwhile, warned of a “new Cold War” with the United States, saying the country had been infected by a “political virus” compelling figures there to continually attack China.

The comments came on Sunday as the war of words between the two superpowers intensifies amid disputes over the handling of the coronavirus pandemic and trade deals.

“It looks like with this national security law they’re going to basically take over Hong Kong and if they do … Secretary [of State Mike] Pompeo will likely be unable to certify that Hong Kong maintains a high degree of autonomy.

“And if that happens there will be sanctions that will be imposed on Hong Kong and China,” NSA Robert O’Brien said in an interview with NBC.

The statement came as the US continues to scale up its condemnation of the proposed law, with Pompeo on Friday calling Beijing’s plan to bypass Hong Kong’s legislative processes a “death knell” for the territory’s autonomy.

The proposed bill, submitted on Friday on the opening day of China’s largely rubber-stamp national legislative session, would forbid secessionist and “subversive activity”, as well as foreign interference and “terrorism” in Hong Kong, which rejoined mainland China from British rule in 1997 under a so-called “one country, two systems” agreement.

Under that agreement, which is set to expire in 2047, Hong Kong maintained some autonomy, including a separate legislature and judicial system, as well as some civil liberties for its residents.

The vice chairman of the National People’s Congress has said Hong Kong pro-democracy protests, which began in June of last year and at times descended into violence, have undermined the agreement that gives Hong Kong its special status and the new legislation would help prevent any behaviour that posed potential security threats.

Speaking at a news conference on Sunday, Chinese Foreign Minister Wang Yi, in a response to growing international condemnation of the move, said Hong Kong affairs were an internal matter for China, and “no external interference will be tolerated”.

In November last year, amid weekly protests in Hong Kong, US President Donald Trump signed into law the Hong Kong Human Rights and Democracy Act, which requires the State Department to certify that the city retains enough autonomy to justify favourable US trading terms, which have helped it maintain its position as a world financial centre.

On Sunday, Wang accused “some political forces in the US” of “taking China-US relations hostage and pushing our two countries to the brink of a new Cold War”.

The escalation of tensions intertwines with US officials’ condemnation of China’s handling of the coronavirus pandemic, which first appeared in the city of Wuhan in December of last year, Wang said.

US officials should focus on the outbreak in the US, which has become the hardest-hit country in the world, he added.

Trump and members of his administration have said China covered up the emergence of the virus late last year and bungled its initial response.

Washington’s criticism has been widely seen in the US as an attempt by Trump to divert attention from the White House’s own COVID-19 failures.

While American officials have suggested it may have originated in a laboratory in China, most scientists believe coronavirus jumped from animals to humans, possibly from a market in Wuhan where exotic animals were sold for meat.

Pro-democracy advocates have accused Beijing of seizing on coronavirus restrictions in Hong Kong to diminish the inevitable unrest sparked by the new national security legislation.

On Sunday, however, thousands again took to the streets of Hong Kong in protest, where they were met with police-fired tear gas and water cannon.

“China has always advocated that, as the world’s largest developing country and the largest developed country, both of us bear a major responsibility for world peace and development,” said Wang. “China and the United States stand to gain from cooperation, and lose from confrontation.” 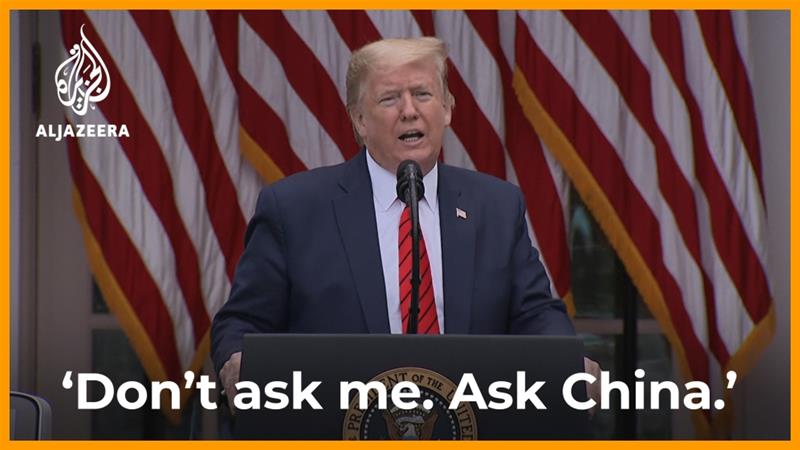