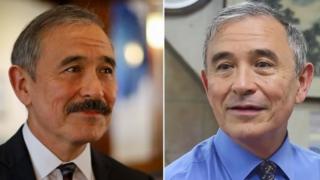 The US ambassador to South Korea has shaved off his controversial moustache, months after his facial hair sparked a debate about the country’s colonial past.

Harry Harris, a retired navy admiral, had his facial hair removed at a barbershop in the capital Seoul.

He said he did so to keep cool during the summer while wearing a face mask in compliance with Covid-19 rules.

“I feel so much cooler now,” Mr Harris said in a video showing the shave.

Mr Harris’s moustache had drawn criticism for its associations with Japan’s colonisation of South Korea from 1910 to 1945.

Earlier this year South Korean commentators and politicians said Mr Harris’s facial hair evoked painful memories of the colonial era because it was reminiscent of the moustaches worn by Japan’s governor-generals.

With help from his Senior Advisor @sykimsy, @USAmbROK Harris visited a classic local barbershop to become a little "cooler" during the hot summer months. Curious about how it went? Watch the video to find out more. pic.twitter.com/cpabketRfd

Mr Harris has been ambassador to South Korea since 2018, during a time of strained relations. South Korea is a key military and economic partner.

The US stations 28,500 troops in South Korea as part of a security alliance to deter aggression from North Korea, which invaded the country in 1950.

Mr Harris had previously raised tensions by urging South Korea to spend more on its military and take a different approach to its relations with neighbouring North Korea.

In the context of these disputes, Mr Harris’s moustache – and his Japanese heritage – became more controversial.

In December last year, the Korea Times newspaper said Mr Harris’s moustache “has become associated with the latest US image of being disrespectful and even coercive toward Korea”.

But scholars say the moustache was a common style worn by a number of regional leaders at the time, including Chiang Kai-shek, leader of China’s nationalist government between 1928 and 1949.

Mr Harris, the son of a US Navy officer and a Japanese woman, suggested the criticism of his moustache stemmed from his heritage.

“My moustache, for some reason, has become a point of some fascination here,” Mr Harris said. “I have been criticised in the media here, especially in social media, because of my ethnic background, because I am a Japanese-American.”

Mr Harris, who was clean-shaven for most of his 40-year naval career, told the Korea Times he had decided to grow the moustache to mark his “new life as a diplomat”.

The moustache, he told the paper, would remain unless someone convinced him it was “viewed in a way that hurts our relationship [with South Korea]”.