Vladimir Putin has been dealt a humiliating blow after one of his prized projects in Ukraine has collapsed into the sea. The Kerch bridge, linking Crimea to Russia, has been pivotal during the war and a key resupply route for the Russian military in southern Ukraine. However, footage has emerged this morning showing the road section of the bridge collapsed into the sea.

The rail section of the bridge, which was only opened in 2020, was seen ablaze, with fiercely burning fire engulfing at least two railway carriages from a train stuck on the bridge.

Footage shared online shared the intense fire, with thick smoke billowing into the air above Crimea.

An unconfirmed video that spread on social media also claimed to show the moment of the explosion.

Responsibility for the explosions and subsequent blaze remains unclear, with official Russian sources telling national news agencies that a fuel tanker was involved.

JUST IN: Putin to lose 15,000 troops as army forced to surrender, expert says 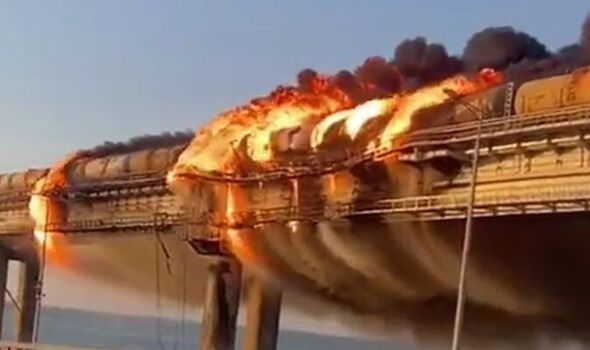 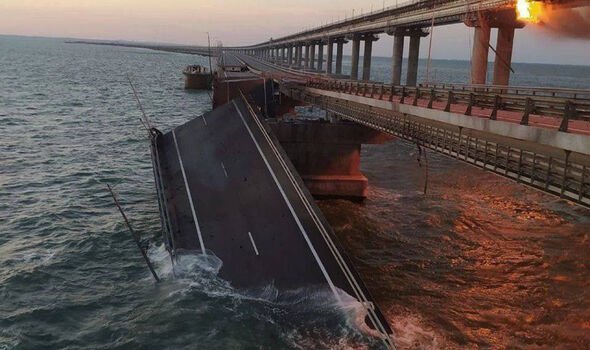 However, Mykhailo Podolyak, an adviser to the Ukrainian presidency, appeared to claim Kyiv’s responsibility.

He tweeted: “Crimea, the bridge, the beginning.

“Everything illegal must be destroyed, everything stolen must be returned to Ukraine, everything belonging to the Russian occupation must be expelled.”

@Osinttechnical, which monitors the conflict, tweeted: “Losing the Crimean Bridge road span was bad for the Russians, but the rail span just spent multiple hours being cooked by a number of fuel cars, with no sign of a Russian firefighting response.

“The Russians rely heavily on that rail span to move heavy equipment into Crimea, and southern Ukraine, especially Kherson Oblast.” 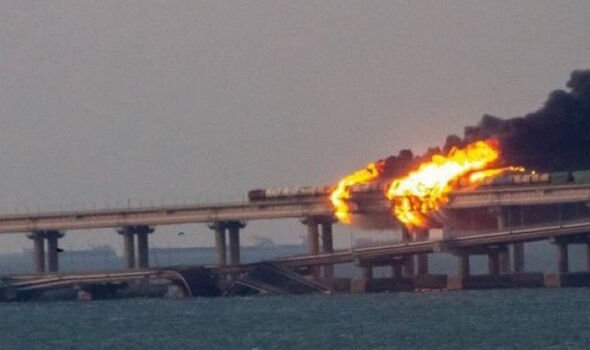 This comes as Ukraine’s President Volodymyr Zelensky claimed that Ukrainian forces have retaken more than 500sq km of territory and dozens of settlements in the southern Kherson region since Saturday.

Several Ukrainians rejoiced after the collapse, claiming it was a belated birthday gift for Vladimir Putin, who turned 70 yesterday.

“This is an utter humiliation for the master of the Kremlin.”

Many also shared footage of the moment in 2018 when Vladimir Putin personally opened the road bridge himself. 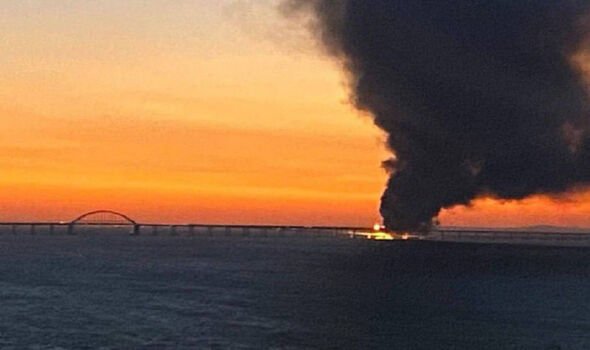 Retired Australian Army Major General Mick Ryan analysed the attack, tweeting: “It is certainly a punch in the face for Putin on his birthday.

“The Ukrainians so far have been excellent at operational design and shaping operations in advance of their advances.

“This could be part of their design for taking back Crimea in the short term – or part of a deception operation to distract from other areas.

“Either way, it presents the Russians with a significant problem. It doesn’t stop resupply to Crimea (there are boats and the route through Melitopol), but it makes holding Melitopol even more important for the Russians.

“This is a massive influence operation win for Ukraine. Even if they didn’t do it, it is a demonstration to Russians, and the rest of the world, that Russia’s military cannot protect any of the provinces it recently annexed.”

The retired general also predicted a significant rise in the number of Russians fleeing Crimea following the latest attack.