Cold weather will hit much of Europe this weekend as large weather systems move down from the north. In the UK, temperatures could dip below freezing tonight, with maps from WXCHARTS showing -4C possible in large areas. The dynamic cold pattern is due to “strong upper-level ridging” over the Atlantic and Russia, according to Severe Weather Europe.

The pattern will allow the cold front to linger over the European continent for up to seven days.

Severe Weather Europe writes: “The cold period is forecast to extend also across the next week, so through mid-October.

“The pattern change this weekend should promote a strong North Atlantic ridge to block any zonal, westerly flow towards our continent.

“To its east, a large and deep upper trough will intensity and dig south across western and central Europe towards the Mediterranean. 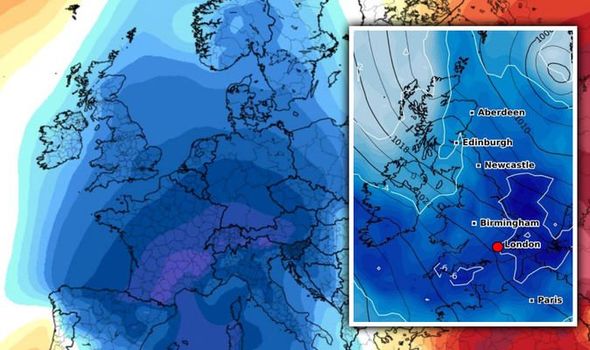 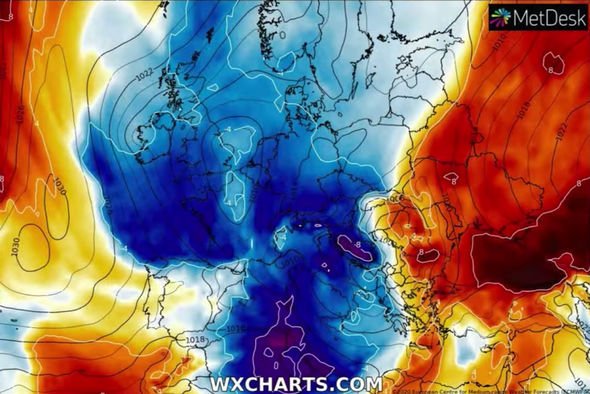 “Therefore, cold temperatures will overspread these parts of Europe and bring much colder weather.

“Locally with cold winds and relatively low windchills as well.”

According to weather maps from Pivotal and WXCHARTS, daily temperatures could stay around 10C below normal.

One weather system will move across western parts of Europe. 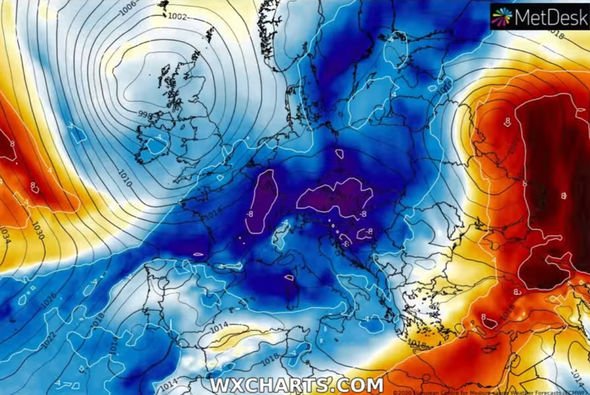 The cold weather is forecast to intensify and extend beyond the weekend days.

Severe Weather Europe says: “The cold will be the most pronounced over western and central Europe, especially over France – with the 5-day temperature anomaly nearly 10C colder than average.”

In one map, using the GEFS system, temperatures could dip to -5C in large parts of the UK.

On Sunday, the Met Office forecast “cool” weather and “brisk northwesterly winds” in some parts of the UK.

The forecast reads: “A few showers around, but many inland areas will be dry with sunny spells.

“Cool, in the brisk north-westerly winds across eastern parts.”

In its outlook for Monday to Wednesday, the Met Office writes: “Cloudy with rain or showers at times on Monday.

“Drier in the north and west on Tuesday and Wednesday, but windy and cool with showers in the south and east.”

The Met Office’s long-range forecast from Wednesday, October 14, to Friday, October 23 says: “Temperatures expected to be rather on the cold side in most areas with overnight frosts and patchy mist and fog likely to occur, particularly in the northwest.” 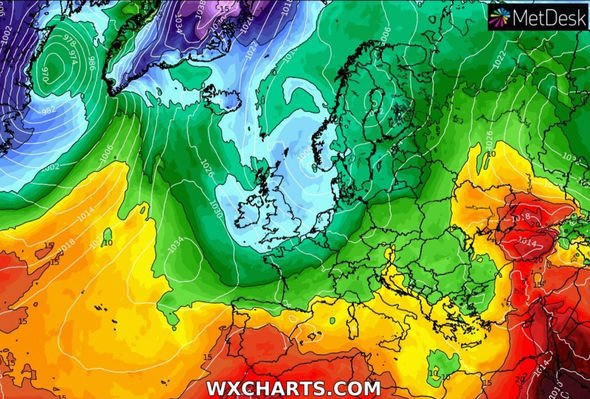 It added: “Turning generally more settled in the north and northwest by the middle of next week and lasting into next weekend, with dry and bright spells likely.

“Meanwhile a cloudier, breezier picture in the east and southeast with more showery conditions, whilst some sporadic outbreaks of cloud and rain may also make way into southwest and western parts of the UK at times.

“This theme is likely to remain largely similar into the week after next.”