The Met Office has issued weather warnings for rain on Tuesday and Wednesday. The yellow weather warnings cover areas in northern Scotland where rainfall could reach 150mm in some locations.

For Tuesday’s warning, The Met Office said: “Rain will persist throughout the day, turning heavy at times, with heaviest rainfall over high ground.

“There is some uncertainty with the timing of the clearance of the rain, which has implications for overall rainfall amounts.

“By Wednesday afternoon 50-75 mm of rain will fall widely with up to 150 mm possible in a few locations over high ground.”

Bus and train services are expected to be affected in parts of Scotland due to the heavy rain. 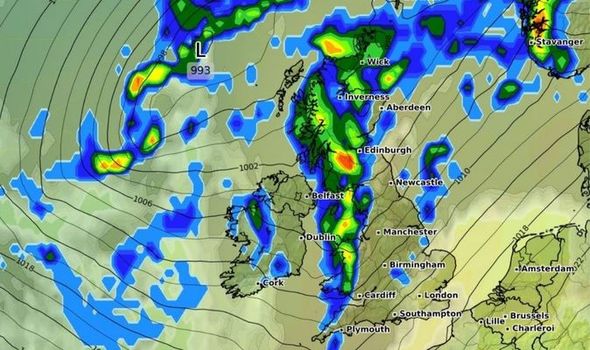 The Met Office added: “There is a small chance that homes and businesses could be flooded, causing damage to some buildings.”

The weather warning also states that some communities could possibly become cut off by flooded roads.

Forecasters have said this week’s weather will be a bit of a “rollercoaster”.

Met Office meteorologist, Tom Morgan, said: “It’s going to be a bit of a rollercoaster next week with a spell of unsettled weather on the way. 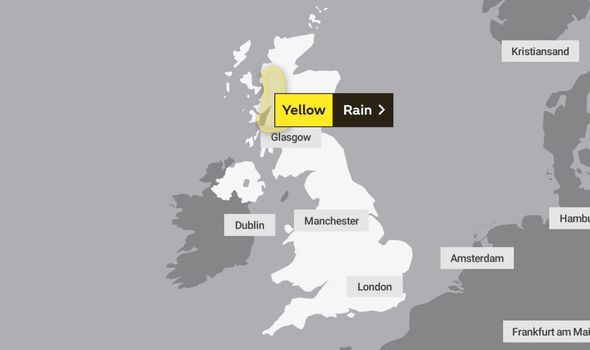 “It will be fairly mild on Monday to Wednesday, especially in the southern regions, and will be a lot brighter and drier than what we’ve seen across the weekend, though rain will still come and go.

“It’s a different story for the rest of the UK, which will be considerably colder and wetter, with up to 150mm of rainfall expected in mountainous regions of Northern Ireland, Scotland and northern England.”

Monday morning is set to be dry and bright for many places before the heavy rain washes over northern parts of the UK.

The Met Office said: “First thing on Monday, cloudy skies for some but as the morning rolls on many places should see some brighter skies for a time. 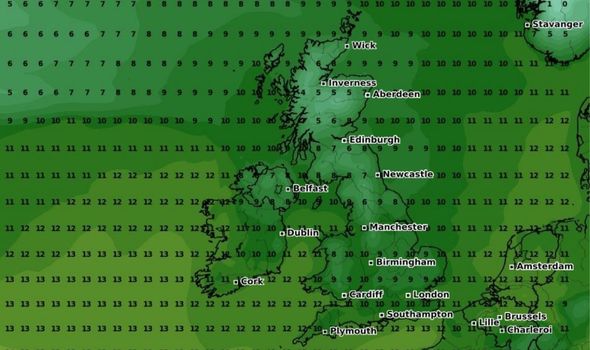 “Looking ahead to Monday afternoon, heavier rain will work its way into parts of Northern Ireland, Wales, north west England and later on western Scotland too.”

Temperatures on Monday are expected to reach 9-13C.

The band of rain is set to move eastwards on Monday evening bringing rain to many parts of the country.

There are 27 flood warnings and 124 flood alerts in place for England as of Monday morning.

The rain will linger into Tuesday bringing heavier spells in northern parts of the UK. 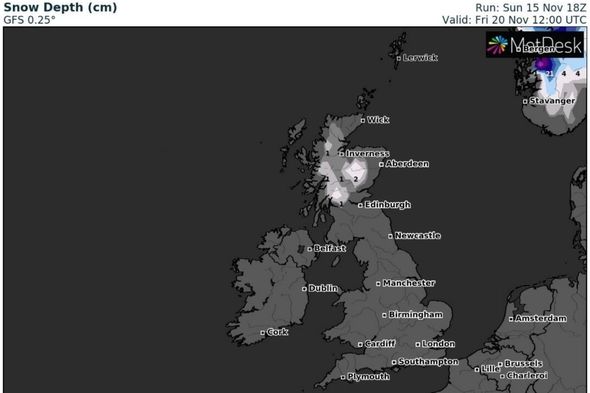 Tuesday is expected to be a mild day with temperatures forecast to reach 17C in some spots.

But a cold front bringing cooler air will cause temperatures to plummet later on in the week.

The change in temperature could bring frost and possibly snow next weekend.

Terry Scholey, Netweather forecaster, said: “The mild, unsettled often windy weather continues well into the new working week, although there are signs of a change by Thursday to much colder weather.

“Some frost and perhaps patchy fog is likely for time, before more rain possibly preceded by snow on hill returns from the west over next weekend to perhaps give us our first taste of the winter to come.”