Britons baked in the hottest day of the year so far on Monday, with temperatures soaring to 29.7C in Teddington, Middlesex. Met Office forecaster Steven Keates warned the sweltering start to the week is expected to be followed by “three potential rounds of thunderstorms” moving from Europe on Wednesday night. The Met Office has also issued yellow weather warnings for storms that could cause flooding and power cuts from 6pm on Wednesday.

However, the UK could still bake in hot temperatures this week despite the spells of rain and thunderstorms.

The charts then turn red to illustrate the heat sweeping across to southern England on the same day. The intense temperatures are likely to reduce on its way over the Channel however, but the likes of Kent will still see highs of 21C hitting.

Essex and Surrey could see 20C, while northern regions including Manchester and Leeds are hit with 16C. 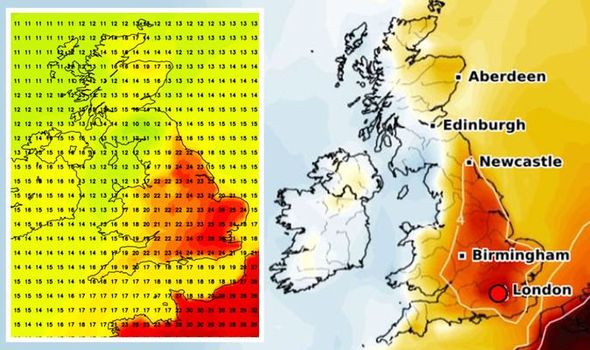 Jo Farrow at Netweather added the hot and humid air will linger in the south east on Thursday, despite the rain and cooler air in northern regions.

She said: “This week sees a balance of hot and humid air, mainly over SE Britain, and fresher conditions from the north west.

“Monday saw the hottest day of the year so far with 29.7C at Teddington, south west London (85F).

“There will be some manoeuvring over the next few days with an Atlantic low throwing its fronts in from the west, the Azores High building up towards Scotland but it is the arrival of thunderstorms from the south which will be the main event. 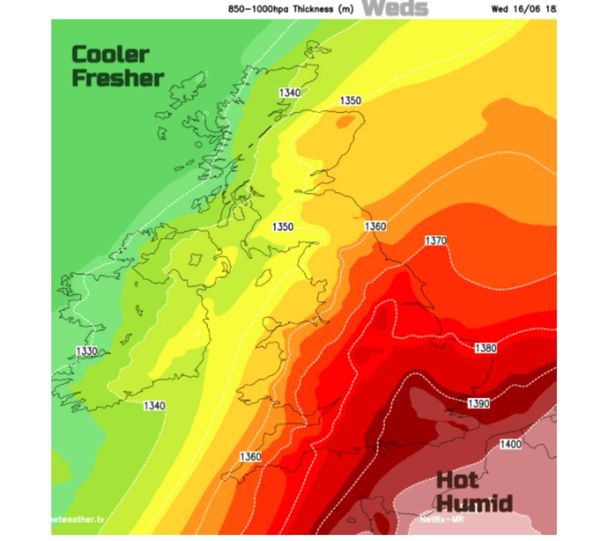 “It’s been warm overnight for London and the far SE of England with temperatures staying in the mid-teens.

“Further north it is again a fresher start to the day but without the brisk west wind.

“Warmer though for Northern Ireland and the Central Belt of Scotland ahead of frontal rain approaching from the NW.

“This frontal boundary will bring rain to Northern Ireland and western Scotland on Tuesday evening, more of northern Britain during Tuesday night. 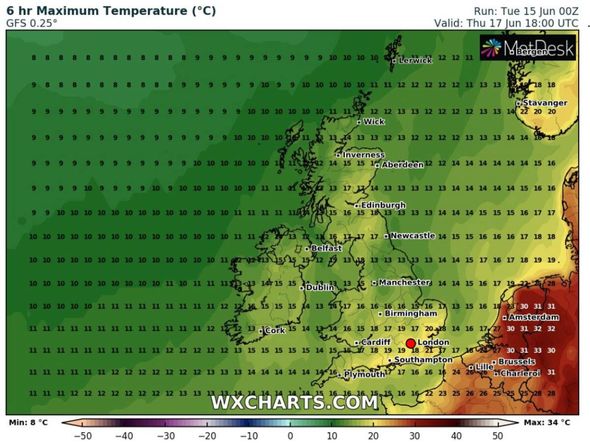 “By Wednesday morning it will be weaker with a lot of cloud and patchy rain for NW England and north and west Wales.

“One side of this, temperatures will be in the high teens, on the other, it’s back to the high 20Cs.

“The hot and humid air clings on for East Anglia, London and the far south east of England into Thursday whereas it will feel a bit nippy for northern Britain by Friday night.”

Mr Keates added the UK could feel the “full force of the heat” tomorrow. 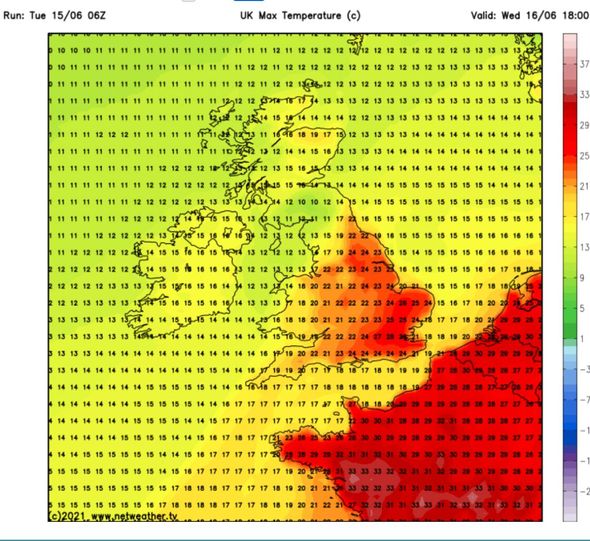 He said: “It looks like the full force of the heat is going to come back on Wednesday for southern and central England, Northern Ireland and Wales.

“There’s a chance that Wednesday could become the hottest day of the year.

“But there’s a big temperature contrast across the North West versus the South East.”

Brian Gaze, a forecaster at Weather Outlook, added Thursday will still be hit with warm air in the south east, despite downpours in other regions. 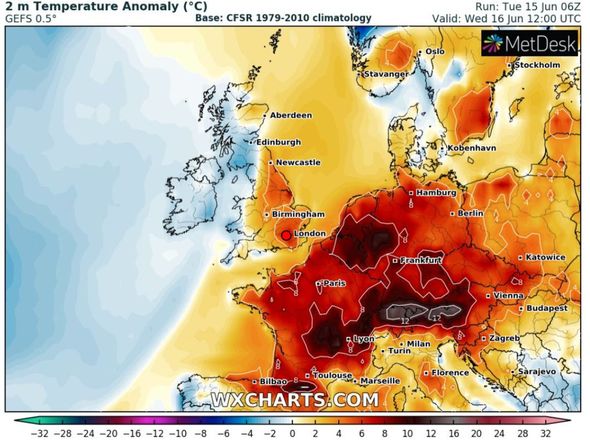 “Temperatures rise rapidly and there is a chance of it being the hottest day of the year so far.

“Elsewhere it will be cooler, with showers but also bright spells. Later in the day thunderstorms push into parts of the south and overnight they feed northeastwards.

“During Thursday downpours and thunderstorms are most likely in central and eastern England. Northern and western areas have showery rain, but also bright intervals. Quite warm in the south east but cooler elsewhere.”