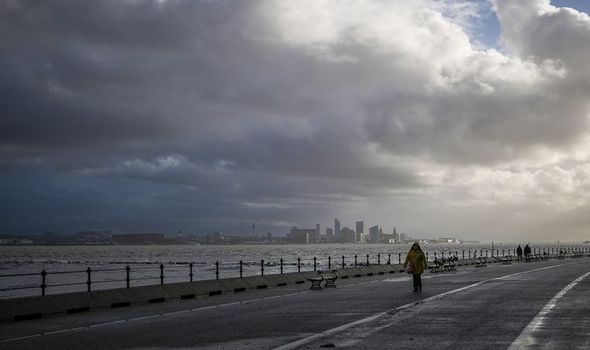 As Storm Barra delivers its brutal assault through the next two days, forecasters warn the next hammering is around the corner. A ‘perfect recipe’ of warm North Sea waters and a La Nina cooling of the Pacific after a placid autumn will drive the misery. Jim Dale, meteorologist for British Weather Services, said: “We are expecting one more major storm this month which will set the trend for coming months.“

“We expect five to six storms to hit through the winter period which could be severe enough to warrant naming. Several factors are at play which will drive these conditions. These are slightly warmer than normal North Sea temperatures giving energy to the storms, La Nina, and a rebound from the very mild and calm autumn. There is always a balancing effect taken by the weather, and autumn was far to calm for us not to see a payback during the winter which will bring several significant storms.”

The dire warning comes as Storm Barra gears up to ravage the nation with hurricane-force winds and torrential downpours. Freezing temperatures will turn rain to snow sparking warnings for eight inches to settle in parts. Government forecasters have issued a raft of warnings for wind, rain ice and snow.

Met Office meteorologist Aidan McGivern said: “Wednesday is going to be very unsettled indeed across many parts of the country. Showers will move around an area of low pressure which will be centred across central parts of the UK. There will be further hill snow, over some high ground in northern England we could see 10 to 20cm [8 inches] building up. It is going to be cold and unpleasant with gusty winds and a lot of showers moving through.”

Get the latest three-day weather forecast where you live. Find out by adding your postcode or visit InYourArea

Storm Barra will sweep into France tomorrow dragging a plume of polar air in its wake. Mr Dale said: “We expect it to turn colder after Tuesday as this storm will drag in Polar maritime air. There is the potential for more wintry showers through the week.”

Months of storm hell will be driven by warm North Sea waters feeding energy into low-pressure systems. A La Nina cooling of the eastern Pacific, which can influence weather in the UK, will boost the misery.

Mr Dale said: “This is a perfect recipe to drive storms through the winter. The main factor, however, is that we had a worryingly tranquil autumn, and the weather always exerts a balancing effect. The storms we are seeing now are the storms we would expected to have seen earlier in the year. We expect this pattern to continue through the next three months.”.