Britons could see hot temperatures return over the coming weekend after wet and windy weather during the weekend. July is likely to maintain the dry and fine weather conditions after the grey and rainy weather passes during the week. Britain may see highs of 24C over the weekend according to WXCharts.

The weather forecaster has revealed on Sunday afternoon, London and the South East may see temperatures rise to hit 24C as England begins to enjoy the restrictions being ease on Saturday, July 4.

So Britons living in England will have the chance to basque in the sunshine in pub gardens this weekend after the venues were forced to close more than three months ago.

On Monday and into the first half of next week, temperatures will cool off again – reaching highs of 20C for London and the south-east and 15C to 18C elsewhere in England.

But come Thursday and the forecast brightens up once again. 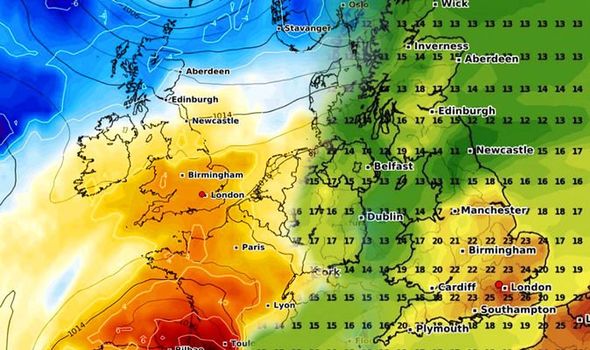 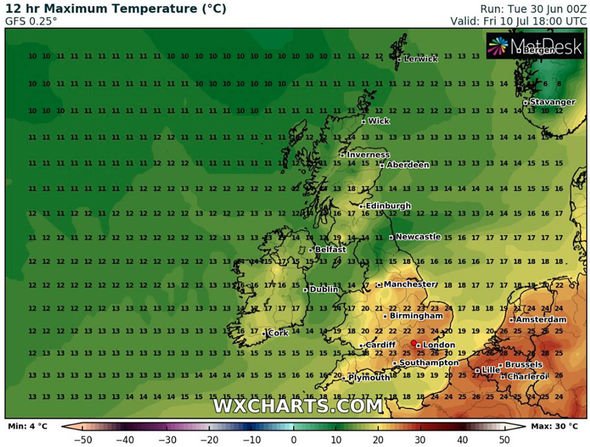 WXCharts shows that by midday on Thursday, parts of England will see highs of 22C, reaching 23C by 6pm.

And on Friday, temperatures will start to really hot up.

Vast swathes of England will see highs of 21 to 22C from midday to 6pm, according to the charts.

While in London and the southeast, the mercury will reach a swltering 26C at its hottest, with some areas looking and 23 to 25C. 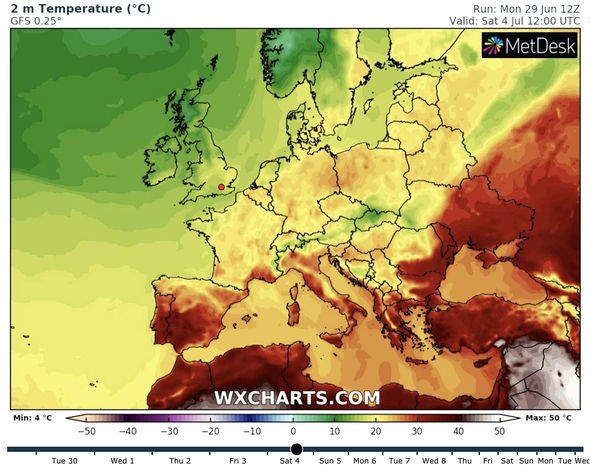 The Met Office forecast for this weekend reads: “Into Friday rain arrives from the northwest and is heavy over western hills.

“Drier and slightly brighter on Saturday. Next weekend looks unsettled with showers or longer spells of rain, heaviest and most frequent for some western areas.

“Temperatures will vary around average for the time of year though the west will be mainly rather cool. There will, however, still be some drier and sunny interludes.”

According to Netweather, the summer 2020 in the UK is due to be warmer than average summers.

The rainfall forecast to be below normal, especially in Southern Britain.

May was, in fact, the sunniest calendar month on record in the UK. 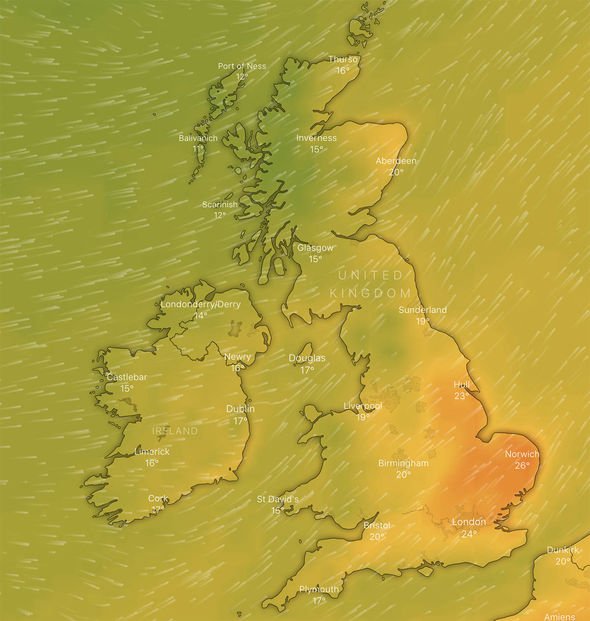 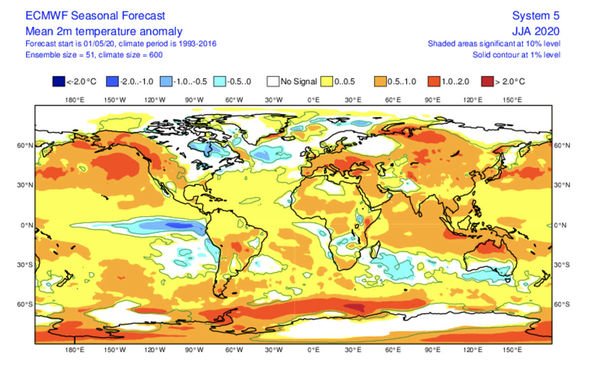 Netweather forecasts some uncertainty over rainfall across Northern Britain during the summer 2020 months.

The forecaster added it is not expected to be as unusually warm or dry in this region, especially when compared to average, as it has been during the Spring.

The forecast reads: “July is expected to be a more “westerly” month, but still probably drier than average in the south of Britain.

“For August, some of the indices are suggesting a high chance of anticyclonic and/or northerly types being more frequent than usual.

“However, while the ENSO and Arctic sea ice composites are suggesting that June and August will be more “northerly” than average, neither the Met Office nor ECMWF seasonal forecast ensembles are pointing towards an above-average frequency of northerlies overall, though both indicate higher than average pressure overall.”

In terms of temperatures, Netweather predicts July and August to be closer to normal temperatures generally.

The confidence in this assessment is lower than normal, but the forecasters predict an enhanced north and south split in terms of hot and sunny conditions.

July is thought to likely be warmer than normal in the south-east, but this weather may not be reflected in other regions of Britain.

Europe is also due to enjoy hot weather over the coming weekend as a heatwave hits the region.

European countries in particular Spain and Germany could see scorching highs of 43C by Sunday.

France is likely to be slightly cooler with highs of 31.5C on Saturday, rising to 33.3C by the following Wednesday.

Most of Europe will enjoy temperatures of more than 30C over the first week of July.