The high, summery temperatures are understood to be the result of southerly winds moving in from Europe and high pressure patterns that will kick in towards the end of the week, around Thursday. The predicted hot weather comes as the UK recorded its third-hottest day ever on record last Friday, July 31, when the mercury topped 37.8C at Heathrow Airport. The coastguard said it had one of its busiest days in years, while councils said beaches were “unmanageable”.

Weather maps from WXCharts show temperatures steadily climbing through Europe, with parts of Portugal and France hitting the low 40Cs.

Spain is likely to see temperatures exceed 40C in some regions, making way for the hot air to travel to the UK.

Certain areas within Europe have seen the map turn black, meaning they are slowly but surely edging towards the low 40Cs.

The warm weather will move over from mainland Europe into England, where areas in the south are most likely to see the best fo the sunshine.

Weather maps show temperatures in southern England reaching the mid 30Cs and into the low 40Cs towards the end of the week. 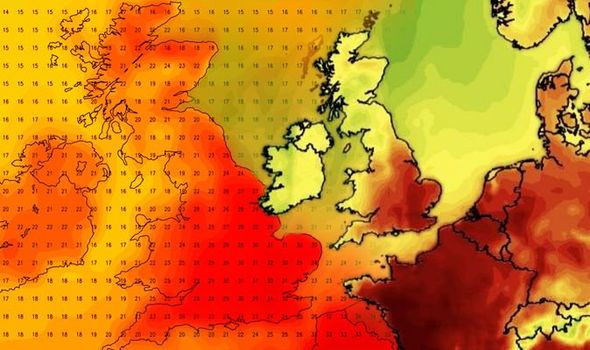 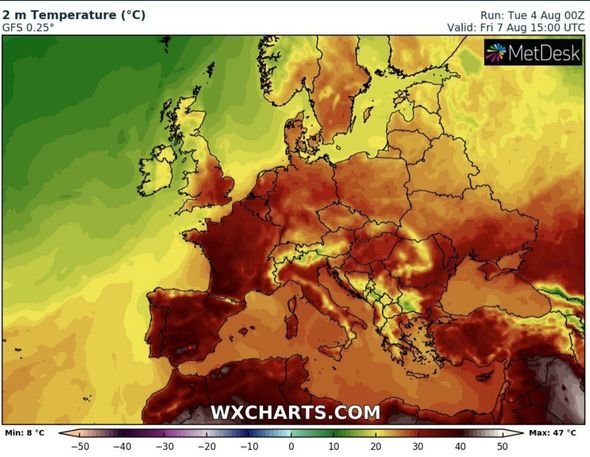 The WXCharts Map shows today will be a sunny, but mild day in the UK, with temperatures remaining between 15-20C.

Within the coming days, London and the south-east will see temperatures reach a scorching 33C, while the North and Scotland will remain relatively cooler, peaking at just 24C.

Met Office forecaster Bonnie Diamond said there will be “a warm spell across the UK” with the highest temperatures “focused in the southeast of England”. 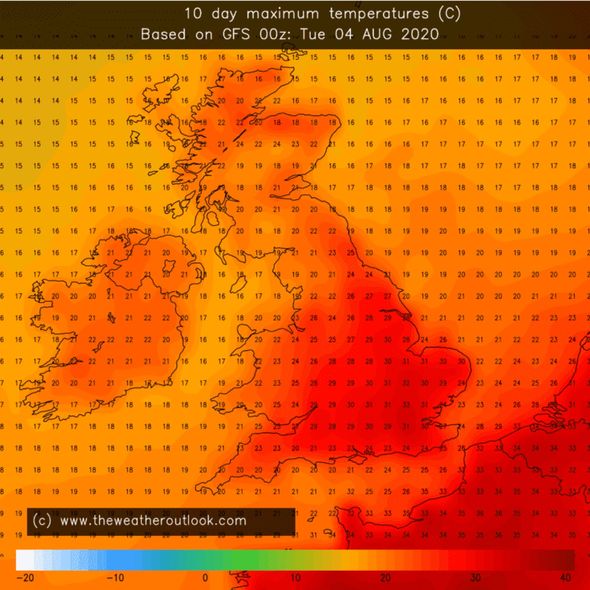 Met Office meteorologist Marco Petagna added things will undoubtedly heat up as the country approaches the weekend, but some parts of the north will not be so lucky.

He said: “The trend is that things will get much warmer on Thursday, though there is still a risk of some cloud in the north west.

“For the north and the north-west, temperatures will be hovering around the mid-20s. But the real heat and the best of the weather will be down south. 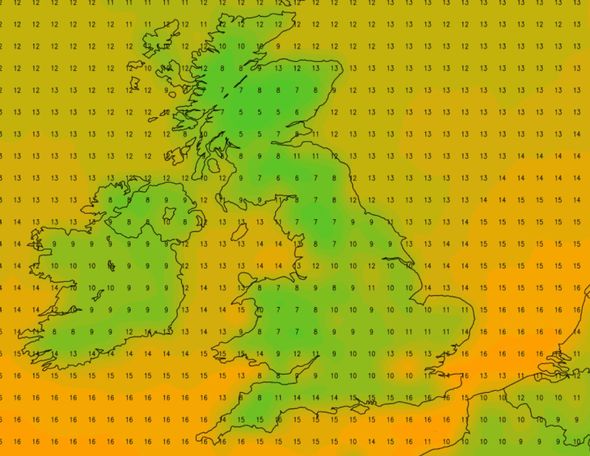 Mr Petagna added that things will cool off slightly heading into Saturday and Sunday, with colder temperatures forecast for much of the country.

“Computer models suggest a very warm or hot period from Thursday, lasting for as long as mid-month. 35C is possible again.”

It comes as lockdown measures have been significantly eased in the UK and people flock to beaches across the country.

Britain’s coastguards have issued a warning to beachgoers after there were 329 alerts recorded last Friday, most of which involved reports of missing children and swimmers and paddle-boarders getting into difficulties.

Duty Operations director for HM Coastguards, Julie-Anne Wood, urged people to be careful when going swimming in the sea.

“We are heading into a spell of good weather and we would ask everybody to check and double-check the tide times – put a timer warning on a smartphone to remind you – and be aware of things like rip currents, and make sure you have a means of contacting us if things do go wrong.

“We will always respond when someone calls 999 and asks for the coastguard and we’ll always distress ion VHF and do everything we can to rescue those in need.

“All we ask in return is that people take extra care at the coast – it can be unmerciful to the unwary and even to those who know it well.”