ANKARA/ISTANBUL (Reuters) – Turkey will hire 32,000 more medical staff and stop exporting locally-made face masks so its own services can use them as the coronavirus spreads across the country, the health minister said on Monday. 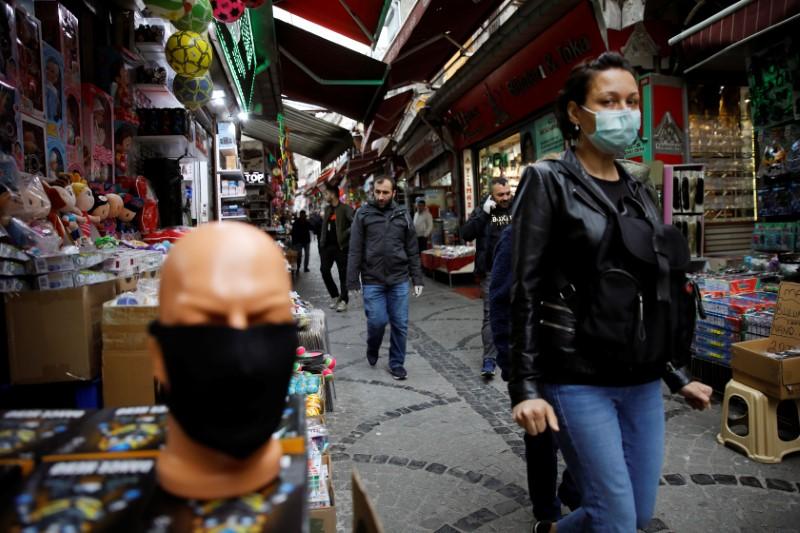 Fahrettin Koca announced Turkey had ordered rapid testing kits from China, as well as medicine that he said he been used to treat coronavirus patients – though he did not give details on the treatments.

“Masks produced in Turkey will not be exported while we need them here,” Koca told journalists in Ankara.

Turkey’s death toll from the coronavirus increased by seven to 37 on Monday as the number of confirmed cases rose by 293 to 1,529, Koca said. It has carried out more than 24,000 tests, he said, adding without providing details that some patients had recovered.

“The cases were mostly from abroad initially, but I can say that through contacts, it has increased … I can say it has spread almost across the whole country,” the minister said.

“We have activated the rapid test kit. Today, 50,000 arrived from China. On Thursday, 300,000 additional kits will come, and we have made arrangements to use up to one million kits,” he added, saying some medical staff had been infected.

Earlier, the Hurriyet newspaper quoted Turkish Interior Minister Suleyman Soylu as saying authorities had raided warehouses storing masks. The government would seize factories if local producers did not agree to sell the masks to the health ministry by Monday night, Soylu was quoted as saying.

“God is our witness, they have 10-12 hours or we will seize their factories tomorrow,” he added, according to the report.

Turkish producers had been exporting medical gear to a number of countries, including Iran.

But Ankara has been increasing controls on the trade to meet its own demands. Last week, it moved to limit private sales by mandating a doctor’s prescription for some masks.

Separately, Soylu was quoted as saying 10,750 people had been quarantined across the country, and anyone violating the quarantines would face fines.