US president’s remarks come after he halted about $500m in funding for the World Health Organization despite crisis. 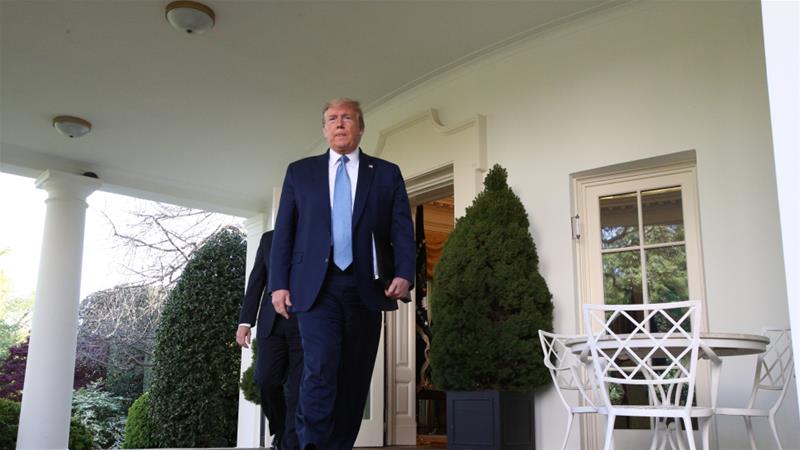 US President Donald Trump escalated his attack on the World Health Organization, saying its early guidance on the coronavirus outbreak was a “horrible” mistake – and perhaps even a deliberate one.

“Tragically, other nations put their trust in the WHO and they didn’t do any form of ban,” Trump said at his daily White House briefings on the pandemic on Wednesday.

But the US president later implied initial decisions by the WHO were not a mistake, and it “perhaps” was aware of the “gravity” of the situation, without citing any evidence to back his claims.

“I’m sure they [the WHO] didn’t know the gravity of it, but perhaps they knew,” he said.

Trump’s comments came after he announced on Tuesday his administration would halt funding to the WHO because of its handling of the pandemic.

The total number of coronavirus cases in the world has surpassed two million and more than 137,000 people have died, according to data compiled by Johns Hopkins University.

The director-general of the WHO, Tedros Adhanom Ghebreyesus, said he regretted Trump’s decision to halt US funding of the UN body, amounting to about $500m – or 15 percent of its total budget.

“When we are divided, the coronavirus exploits the cracks between us,” Tedros told reporters in Geneva.

The WHO will review the impact of the funding gap and will continue its work “without fear or favour”, he added.

“In due course, WHO’s performance in tackling this pandemic will be reviewed by WHO’s member states and the independent bodies that are in place to ensure transparency and accountability,” said Tedros.

The head of the World Health Organization’s Europe office hailed a show of support for the UN agency on Thursday, including some “commitments” from around the world.

Amid an increasingly fraught financial situation for the WHO as it battles the coronavirus outbreak, Dr Hans Kluge said it has “been overwhelmed by the support of European countries, but also people of Europe and all over the world”.

Kluge credited the United States for its historic support for the agency.

“We are looking at the finance situation. Some commitments have come in,” Kluge said, without elaborating. “But for the time, we’re in the midst of the crisis. So what we focus on is to save lives.”

Chinese Foreign Ministry spokesman Zhao Lijian said the US decision to cut WHO funding would affect efforts by countries to tackle the outbreak.

The Trump administration has also accused Beijing of mishandling the pandemic, with US Secretary of State Mike Pompeo asserting that China should be more transparent and “open up” about the origins of the virus.

“For China, Trump’s attacks on the WHO are just following on from his attempt to shift blame from himself for his own mismanagement to the WHO, as he had been for the past few weeks trying to do with China,” Al Jazeera’s Katrina Yu reported from Beijing.

Yu said Chinese state media also reflected this sentiment with the Global Times newspaper running an editorial criticising Trump’s decision to attack the WHO, which it said “was a move against humanity” at a time when nations should be rallying behind the organisation.

Einar Tangen, an economic advisor to the Chinese government, told Al Jazeera China believes Trump was using the controversy with WHO for his own re-election campaign.

“The large issue is what happens to this budget. The US is about 15 percent, half of which goes to Africa and all but 10 percent is really going to development areas,” he said.

Tangen noted countries around the world that had “much weaker health security systems” – such as India, Indonesia and some in South America – could see dire consequences from the US decision.

“People will regret they were arguing about this at a point when they were seeing the tragedies unfolding,” Tangen said.