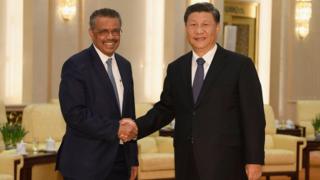 President Trump has formally started the process of pulling the US out of the World Health Organization (WHO) and says funding will now be redirected elsewhere.

He has accused the body of mismanaging the coronavirus pandemic when it emerged in China, and of failing to make “greatly needed reforms”.

We’ve been looking at some of the charges President Trump has levelled against the WHO and the health body’s responses.

“The WHO failed to adequately obtain, vet and share information in a timely and transparent fashion.”

This has become a regular theme of Mr Trump’s criticism of the WHO, and in his letter to its head Dr Tedros Adhanom Ghebreyesus on 18 May, he renewed this attack saying the WHO “consistently ignored credible reports of the virus spreading in Wuhan in early December 2019 or even earlier, including reports from the Lancet medical journal”.

The editor of the Lancet, Richard Horton, has written a letter in response, saying: “The Lancet did not publish any report in early December 2019 about a virus spreading in Wuhan. The first reports we published were from Chinese scientists on Jan 24, 2020.”

In response to the criticisms levelled at it, the WHO says it acted properly in accordance with the information it was given by China, sharing it with medical and scientific experts around the world, including from the US.

The WHO says it was told by China of “a pneumonia of an unknown cause” on 31 December 2019.

And this was flagged on WHO social-media accounts on 4 January.

#China has reported to WHO a cluster of #pneumonia cases —with no deaths— in Wuhan, Hubei Province 🇨🇳 . Investigations are underway to identify the cause of this illness.

Then, on 5 January, the WHO put out an official statement saying it had asked for more information about the illness from the Chinese authorities.

On 12 January, China publicly shared the genetic sequence for the new coronavirus.

On 20 and 21 January, a regional WHO team visited Wuhan.

A public statement was issued by the WHO on 22 January setting out what they had discovered.

On 28 January, Dr Tedros went to Beijing to discuss the outbreak with China’s leaders.

By the end of January, the WHO had declared the outbreak a public-health emergency of global concern.

It has also been reported that WHO experts (drawn from 15 countries including China) met a week earlier to discuss whether to issue a global alert but could not agree among themselves.

“Through the middle of January, it parroted… the idea that there was no human-to-human transmission happening despite… clear evidence to the contrary.”

President Trump identifies a critical few days here when the messaging from the WHO was evolving rapidly.

On 14 January, the WHO tweeted: “Preliminary investigations conducted by the Chinese authorities have found no clear evidence of human-to-human transmission.”

Preliminary investigations conducted by the Chinese authorities have found no clear evidence of human-to-human transmission of the novel #coronavirus (2019-nCoV) identified in #Wuhan, #China🇨🇳. pic.twitter.com/Fnl5P877VG

But the same day, the head of the WHO’s emerging diseases unit, Maria van Kerkhove, appeared to contradict this, suggesting to journalists that “limited” human-to-human transmission had been observed in Wuhan. She did however stress that there was no clear evidence of “sustained” transmission between people.

It wasn’t until 22 January that the WHO confirmed there was clear evidence of human-to-human transmission in Wuhan.

The WHO has denied media reports that it delayed making this evidence public at China’s request.

The WHO has “an alarming lack of independence” from China.

In his recent letter to the head of the WHO, Mr Trump, accuses the organisation of being too close to China, failing to remain objective in its handling of the outbreak.

It’s certainly the case that the WHO has publicly praised China’s response to the coronavirus outbreak and its “commitment to transparency”, something that has clearly angered the US president in recent weeks.

However, many other experts and political leaders, including Mr Trump, have also praised China’s initial response to the outbreak.

On 24 January, Mr Trump was effusive in his support for China’s efforts.

China has been working very hard to contain the Coronavirus. The United States greatly appreciates their efforts and transparency. It will all work out well. In particular, on behalf of the American People, I want to thank President Xi!

Dr Michael Ryan, of the WHO, says the organisation wanted to keep the lines of communication open with China as it battled to contain the virus.

The WHO has also been accused of being unduly influenced by Beijing over the status of Taiwan.

The issue here is that Taiwan is not a member of the WHO, as the island is not recognised by the UN.

The WHO, however, says it does engage with Taiwan and share information with it.

Taiwan says it raised the alarm about the possible human-to-human spread of the virus at the end of December after some of its scientists had visited Wuhan.

Taiwan says its warnings were ignored or not taken seriously.

But the evidence published so far shows Taiwan’s exchanges with the WHO did not specifically mention human-to-human transmission.

“One of the most dangerous decisions… from the WHO was… to oppose travel restrictions. They actually fought us.”

The US restricted travel from China and other countries from 2 February.

But there is no record of the WHO publicly criticising this move.

And it would have been highly unusual for it to do so.

But it had, on 10 January, put out advice recommending no international travel restrictions in response to the virus.

And this was reconfirmed in a statement at the end of February, saying travel bans were not usually that effective and could have an adverse social and economic impact, although they might be justified for a short period of time at the start of an outbreak.

Send us your questions