WASHINGTON — At the stroke of midnight Wednesday, when the United States became the only country to formally quit the Paris Agreement, the global accord designed to avert catastrophic climate change, it fulfilled a campaign promise that Donald J. Trump made four years ago.

But a lot has happened in those four years.

The costs of climate disasters have grown. Banks and investors have begun to turn away from fossil fuels as the price of renewable energy drops precipitously. Not least, key United States allies have rushed to stake out their own climate action targets. Britain, the European Union, Japan and South Korea have all said they would aim to neutralize their own emissions of planet-warming gases by 2050. And, in a shrewd move to outshine whoever is the next occupant of the White House, China, too, announced its own net-zero ambitions.

“The rest of the world has confirmed it will not stop action on climate change,” said Lois M. Young, the ambassador of Belize to the United Nations who, as chairwoman of the Alliance of Small Island States, represents some of the countries most vulnerable to sea level rise.

Ms. Young said she hoped the United States would recommit to the Paris deal in order to minimize the worst climate risks facing countries like hers. “That the country that has contributed the most to climate change is now formally outside of the Paris Agreement, and may remain so for at least the next four years, is an appalling thought,” she said.

If former Vice President Joseph R. Biden Jr. wins, he would bring the United States back in as early as February 2021. But rejoining the Paris Agreement will be the easy part. The United States would find that it has a lot of catching up to do to both reduce emissions and rebuild trust with its international allies.

Teresa Ribera, Spain’s environment minister, called the election the difference of “whether the United States becomes a confrontational power or a constructive power” on climate.

It was not lost on Ms. Ribeira, a veteran of international climate negotiations, that Washington has flip-flopped before, notably on the Kyoto Protocol. The United States joined that global climate treaty in 1997 under the Clinton administration and withdrew in 2001 under President George W. Bush. 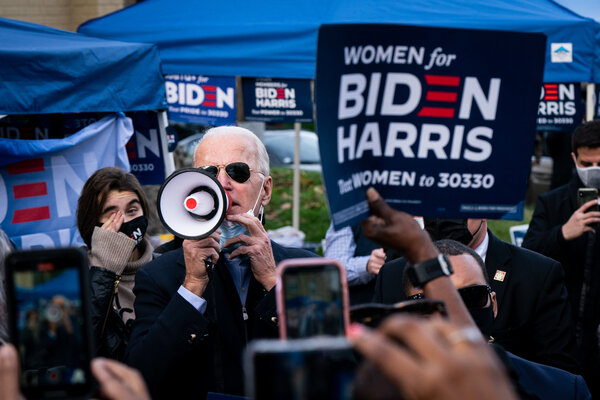 Many countries, Ms. Ribera said, are eager to have the United States re-engaged in the Paris deal. But they also are wary about promises from Washington that it can’t keep, and are prepared to continue taking action on their own if necessary.

“Credibility is something very difficult to earn and very easy to lose,” Ms. Ribeira said. “The recovery of credibility could take some time.”

Todd Stern, who served as climate change envoy under President Barack Obama, echoed that. After four years of an American president who denounced the Paris Agreement and mocked climate science, he said, it won’t be easy to suddenly make demands of other nations.

“I think the most important thing for the United States is to come out very strong and decisively on the domestic side,” Mr. Stern said. “We have to demonstrate that this really is a very high priority and that the new president is moving full speed ahead.”

Mr. Stern said rebuilding trust would require broad diplomatic outreach and aggressive climate action domestically. The American ability to do that depends not only on who is the next president but also on the composition of the Senate, which remains in the balance, too.

According to Carbon Brief, a climate analysis site, the announcements by the European Union, China, Japan and South Korea put nearly half of the world’s carbon dioxide emissions under net-zero emissions targets, which means they would eliminate as much climate pollution as they emit into the atmosphere.

That is, of course, minus the United States.

Mr. Biden has said he would spend $2 trillion over four years to rapidly move away from coal, oil and gas and has set a goal of eliminating fossil fuel emissions from electricity generation by 2035. By midcentury, Mr. Biden has vowed, the entire United States economy will be carbon neutral.

That, combined with pledges from other nations, could make it realistic to meet the Paris Agreement goal of holding global temperatures to safe levels. The accord is structured around a kind of global peer pressure. Every country sets its own targets for slowing down its emissions growth, or, in the case of industrialized economies, reducing emissions.

Mr. Biden has made no specific promises regarding the Paris Agreement, other than that he would recommit the United States to its goals and “go much further.” He has said he would “lead an effort to get every major country to ramp up their ambition of their domestic climate targets” and “stop countries from cheating.”

Currently the United States is about halfway to meeting the Paris Agreement goal set by Mr. Obama to cut emissions about 28 percent below 2005 levels by 2025. A Biden administration would be expected to develop a new target by the time leaders meet for a United Nations climate summit in Glasgow slated for November of 2021.

It remains unclear whether Mr. Trump in a second term might rally other countries to undermine the Paris Agreement, or whether a Biden administration would successfully lean on other countries.

President Jair Bolsonaro of Brazil, who has echoed Mr. Trump’s dismissal of climate science, is unlikely to change his stance, though, some analysts said, Mr. Biden could exert greater pressure on Mr. Bolsonaro on environmental degradation and human rights.

India, for its part, is unlikely to overnight shed its appetite for coal power, though a Biden administration could nudge New Delhi to accelerate its expansion of renewable energy, which is where investors are headed anyway.

“The market case is working irrespective of Biden or Trump,” said Samir Saran, president of the Observer Research Foundation, a research group in New Delhi. “Of course strong leadership catalyzes this.”

Saber Chowdhury, a member of Parliament in Bangladesh who has attended international climate talks for a decade, said he hoped a renewed United States commitment to climate action would spur greater financing for poor countries and access to new technologies to switch from dirty to clean energy.

“America is swimming against the current,” Mr. Chowdhury said. “There is a growing realization that time is running out.”