Melissa Clark traveled to London to meet the cookbook author and bring back a few recipes. 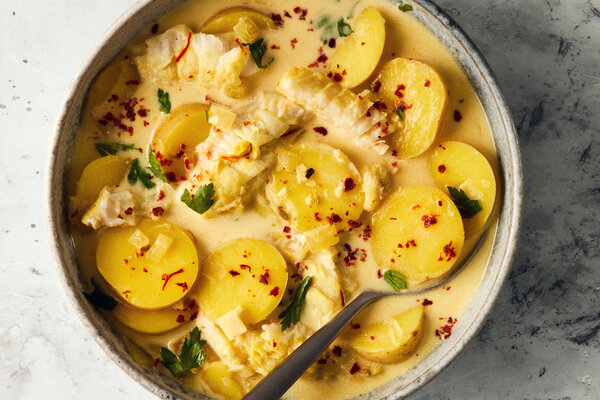 Good morning. A real cornucopia of victuals arrived in the blue-bagged newspapers we delivered to Times home-delivery subscribers this morning!

Melissa Clark has a lovely profile of the cookbook author Claudia Roden, an Egyptian exile whose 1968 cookbook, “A Book of Middle Eastern Food,” helped introduce the non-Arabic-speaking world to the joys of baba ghanouj, herb-flecked Lebanese tabbouleh and crispy spice-imbued Moroccan b’stillah.

Melissa traveled to London to meet with Roden, 85, in her flowery garden, where they ate bullinada, an aioli-spiked fish stew (above), a recipe for which is in her latest cookbook, “Claudia Roden’s Mediterranean: Treasured Recipes From a Lifetime of Travel.” (It’s out in the United States next week.) They finished their meal with wedges of Turkish yogurt cake; Melissa secured that recipe as well.

And David Tanis delivered recipes for a fall meal of great distinction, starting with julienne carrots with cumin and coriander, moving into a tagine-like stew of Moroccan lamb shanks with apricots and chickpeas, and finishing with a molasses ginger cake with chopped dates.

In other news, Diwali, the festival of lights observed by more than a billion people across faiths around the world, commences on Thursday: prayer, fireworks, feasts and celebration of the victory of light over darkness. Of course we have recipes, and if I’m going to choose one for tomorrow night it’s going to be Maneet Chauhan’s chaat party, a choose-your-own-adventure spread that makes for a terrific no-cook dinner in the middle of the week.

Not that you need a proper recipe to make a delicious meal. Sometimes all you need is a prompt. For instance, how about a hot-dog party? You could fry or broil or steam your dogs, then top them with chopped pickles, fresh or pickled jalapeños, shredded cabbage or lettuce, and melted cheese. Serve them on toasted rolls with ketchup, with mustard, with mayonnaise, with bacon, whatever you like.

(Alternatively, you could follow the instructions in a 1950s recipe chapbook I recently came across and make freestyle barbecued frankfurters: Heat some barbecue sauce — ketchup, brown sugar, dry mustard, a big splash of vinegar, some Worcestershire sauce, chopped onion and garlic — and then cook the hot dogs. Slide those into the sauce, let everything come together and serve with toast. Old school!)

We have thousands more recipes to delight you waiting on New York Times Cooking. It’s true that you need a subscription to access them, and to use our tools and features. We think subscriptions offer good value and hope that you agree. Subscriptions support our work. They allow it to continue. Thank you for yours.

You can find inspiration, as well, on our Instagram and YouTube channel. And if you run into trouble along the way, either in the kitchen or on our site and apps, please do not hesitate to reach out. We’re at [email protected], and someone will get back to you.

Now, it’s not so much to do with cooking food as with consuming it, but our Priya Krishna has two great stories in The Times this week. One’s about the continued presence and rising popularity of mozzarella sticks in restaurants up and down the fanciness ladder. The other is about the bonkers scene at New York’s generally staid La Grenouille, where the majority owner, Philippe Masson, has started taking to a small stage in the back of the dining room to belt out standards in a voice that combines, Priya wrote, “the boom of a sportscaster with the swagger of an Elvis impersonator.”

Lindsay Zoladz turned me onto Anaïs Mitchell’s new single, “Bright Star,” her first solo outing since she wrote the Tony Award-winning “Hadestown.” (It’s just one of a baker’s dozen of new songs reviewed by Lindsay and her colleagues on the pop music desk of The Times.)

Finally, I don’t know if I’m going to read the 500 pages that make up Huma Abedin’s memoir, “Both/And,” but Susan Dominus’s sly review in The Times maybe means I don’t have to. It’s a terrific read. So dip into that, and I’ll see you on Friday.