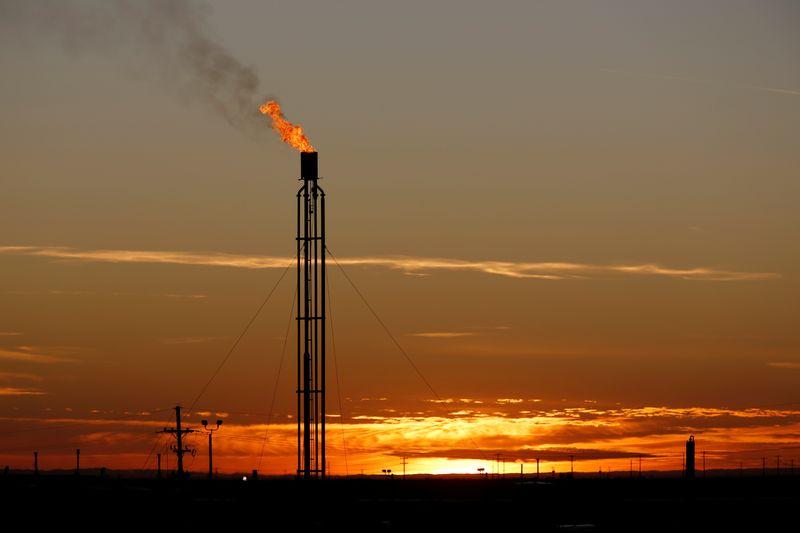 HOUSTON (Reuters) – Texas as early as this fall could tighten some rules for the controversial practice of natural gas flaring, the head of the state’s regulatory commission said on Tuesday.

The practice of burning off unwanted natural gas produced alongside more profitable oil has become a top issue for both environmentalists and investors, who are focused on sustainability measures and are already frustrated by a decade of poor financial returns in oil and gas. Flaring has surged with U.S. oil output, but can worsen climate change by releasing carbon dioxide.

Recommendations from an industry panel, provided to state regulators at a meeting on Tuesday, included reducing by half the number of days producers can routinely burn unwanted gas without going to the Texas Railroad Commission, the state’s regulator, for a hearing.

Commission Chairman Wayne Christian directed agency staff to figure out which of the recommendations from the Texas Methane & Flaring Coalition, a group of producers and industry organizations, could be implemented by the fall.

“This is now the opportune time to implement meaningful reforms to reduce flaring before oil and gas production climbs back to previous highs,” Christian said, adding that the issue has become well known on Wall Street and is hindering some producers’ access to capital.

Flaring is used sometimes during well maintenance, plant outages or for safety reasons, but is also done routinely in some oil fields that do not have pipelines to get gas to market. Texas regulators would also improve the data available on flaring, tracking for the first time how the gas is disposed, under the recommendations. The alternative to flaring, known as “venting”, is even more damaging as it releases unburned, odorless methane, which is the main component of natural gas and many times more potent as a greenhouse gas.

Figuring how to improve the agency’s data “will be a priority,” said Commissioner Christi Craddick, one of three elected commissioner that oversees the agency.