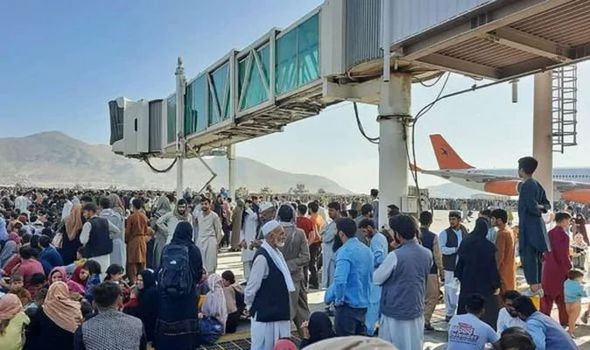 Vice Admiral Sir Ben Key said the aim is to evacuate 1,000 people a day, but troops “can’t afford to pause and wait”. The UK wants to help 6,000-7,000 British nationals and eligible Afghan staff to leave, but individuals must make their own way through Taliban checkpoints to Kabul airport and RAF flights.

Afghans can apply to relocate to the UK from a third country because it is so difficult for them to reach Kabul – and the Daily Express understands there will not be a time limit for this scheme.

But Sir Ben said: “We don’t control how the Taliban are running checkpoints across the city. They are the providers of security now, not us.

“We have to be pragmatic, they are controlling how and what we can achieve. At some point, they may remove their consent.

“At the moment, they are being quite clear that as long as we are withdrawing, then they are happy for us to go about our business.”

Sir Ben said the UK wanted to bring as many people back as quickly as possible.

He added: “We will go for as long as it takes us to either meet the demand, or when the security situation means that we’re no longer operating with consent.

“We will try our utmost to bring back everybody we can but we do not own the finish point of this.

“We can merely work day by day as hard as we possibly can.

“We make no assumptions about that other than we really can’t afford to pause and wait.”

Asked if British troops could leave Afghanistan before all UK nationals and allies have been evacuated, Vice-Admiral Key added: “We are working on a day by day basis.

“We may well find there is a situation, as the Defence Secretary made quite clear yesterday, the situation on the ground may make it untenable for us to continue to evacuate other people.

“We can clearly continue to try and understand those contingencies and what that moment might look like and if we can spot it.

“But at the moment, we believe we have the consent to do what we want to do.”

The UK has sent about 900 troops to Afghanistan to help evacuate British nationals and Afghans who are eligible to resettle in the UK.

There were chaotic scenes at Kabul airport on Monday, as thousands tried to flee the country after the Taliban seized control of the capital.

A number of people died and large crowds on the runway led to all flights being halted for several hours.

“That anxiety is because the government that they thought they recognised has literally collapsed in the last 24 hours.

“And they were facing very uncertain futures. And now we wait to see what or how the Taliban step into the sort of governance.”

Links to the Taliban, either personally or through relatives, are among the criteria being examined for Afghans applying to be relocated to the UK under the ARAP scheme.

People who want to come to the UK are being told they must reach Kabul ‑ despite fears those who helped the British Army could be executed if discovered by the Taliban.

It is intended to protect interpreters and other Afghan staff who worked for the British government and military, but the government said anyone judged to present a national security risk or who has committed violent or sexual crimes would be refused.

National security chiefs are running background checks on every applicant in a bid to make sure terrorists do not exploit the situation to enter Britain.

Officials are also working to ensure that people approved under the scheme cannot be impersonated by others seeking to reach Britain.

But sources did not deny that even people who supported the Taliban could be granted entry to the UK if they are not deemed to be a security threat to the UK.

The US should withdraw all their forces from the country, but the Taliban is “committed not to attack them”, said Shaheen, adding: “They have already violated the time frame which was enshrined in the Doha Agreement”.