The South China Sea Strategic Situation Probing Initiative’s annual report claims the United States has intensified its military operations in the region’s waters. It claimed American forces had conducted eight so-called freedom of navigation operations – in which US vessels sail within 12 nautical miles of land claimed or occupied by China – last year, which was three more than in 2018. The report, which tracks US activity in the South China Sea, also said America had engaged in at least 50 joint and multiple exercises with countries from Southeast Asia and elsewhere in the region.

The report came as tensions continue to soar between the US and China over issues from trade to the coronavirus pandemic.

It said: “As the strategic competition between China and the US has continued to intensify in recent years, the comparison of the navies have become evident, particularly in the South China Sea.

“By carrying out freedom of navigation patrols in the South China Sea and sailing through the Taiwan Strait, the US is making a retaliatory response to China, which is becoming a new trend.

“As China continues to modernise and strengthen its navy and air force, the US will become more concerned and increase its surveillance…against the Chinese military.”

The report concluded: “The risk of confrontation in the sea and in the air will increase.” 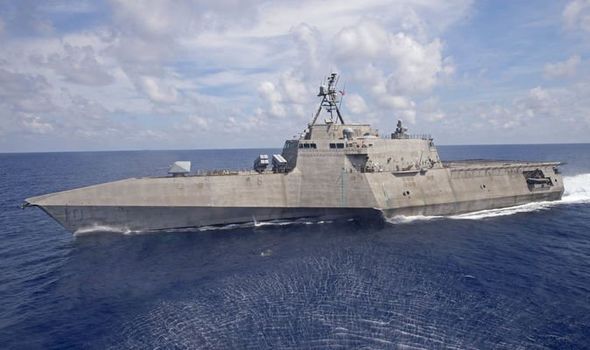 Beijing has continued to plot to militarise the South China Sea, bringing the whole region a step closer to conflict.

Warships, coastguard vessels, militia boats and oil rigs in the contested waters have doubled as Malaysia, Vietnam and China jostle for their claim to the sea.

Chinese military aircraft have conducted anti-submarine drills in the contested waters in recent weeks, in response to the USS McCampbell sail through the region.

In mid-March, China conducted joint exercises despite knowing the risk of aggravating other claimant countries.

Beijing has also activated its fishermen militia which have outnumbered fishing boats of other countries in the South China Sea, in a bid to outmanoeuvre them.

These fishermen militia have been closely followed by Chinese coastguard ships as a show of power. 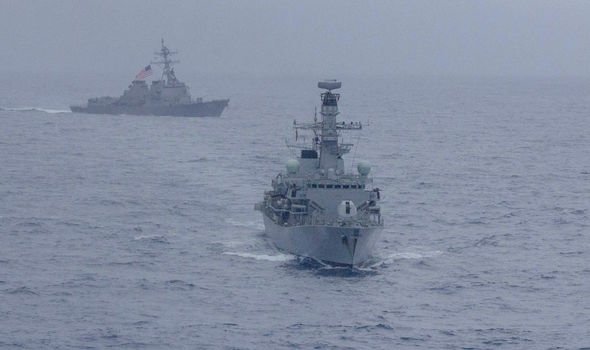 Earlier this month, USS Theodore Roosevelt along with an advanced destroyer made a visit to Danang to mark 25 years of diplomatic relations.

It was the second-ever visit by a US carrier strike group to Vietnam, and was perceived by China as a growing closeness between the US and Vietnam.

The US counter moves and live firing exercises have aggravated China to such an extent that it has been firing lasers on US surveillance aircrafts, while conducting air blasts in the East China Sea.

The US has developed a ten year plan to tackle Chinese ambition in the region, with the aim of making it easier for the Navy to navigate around the island chains.

Marine Corps Combat Development Command plan to axe 12,000 personnel and give up heavy artillery in order to focus on lighter mobility options.

Drones and mobile anti-ship guns are understood to be part of the plans, and are believed to have been designed specifically to combat China’s People’s Liberation Army. 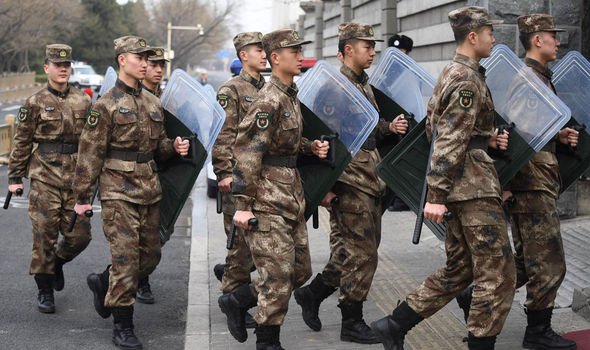 Hostilities between the two world superpowers are particularly risky near the Spratly Island chain, home to seven Chinese island bases.

The moving of its aircraft carriers, airstrips and weapons into the region has earned the cluster of bases the nickname: “The Great Wall of Sand.”

A leaked set of photographs given to a Filipino newspaper revealed just how elaborate China’s development of military bases has been.

Some images showed cargo ships and supply vessels, which the newspaper said appeared to be delivering construction materials to the China-controlled islands.

Others show runways, hangars, control towers, helipads and radomes as well as a series of multi-storey buildings that China has built on reefs.