NASA shows the path of the 2021 annular solar eclipse

On Thursday, June 10, a solar eclipse or “ring of fire” will be visible in the sky across several countries, as the Moon blocks the Sun’s rays. While some countries will see a total solar eclipse, Brits will see a partial eclipse, with up to half of the Sun blocked by the Moon. But what will the weather forecast hold for the eclipse tomorrow?

In the northwest and Scotland up to half of the Sun will be obscured by the Moon.

Down in the southeast the partial eclipse will be around 20 percent of the Sun.

Countries able to view the full spectacle are Northern Canada, Russia and Greenland.

Dr Emily Drabek-Maunder, an astronomer at the Royal Observatory Greenwich, said: “This ‘ring of fire’ will be seen from Russia, Greenland and northern Canada.

Read More: Where can you see the ‘Ring of Fire’ eclipse tomorrow? MAPPED 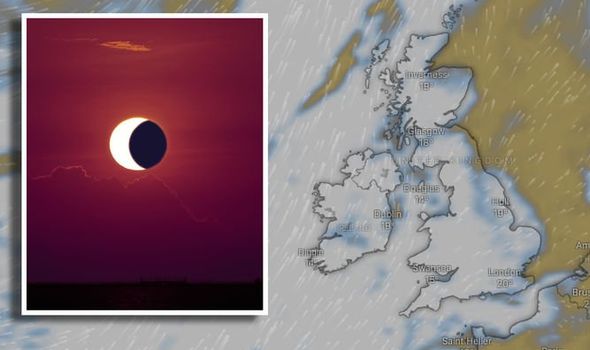 “From the UK, the annular solar eclipse will be a partial eclipse, meaning that we’ll only see the Moon pass in front of a small part of the Sun.”

The maximum eclipse will be at 11.13am BST, with the Moon obscuring nearly one-third of the Sun.

The partial eclipse will then end at 12.22pm BST. 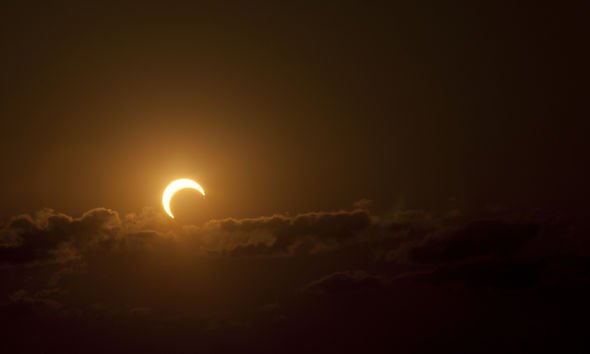 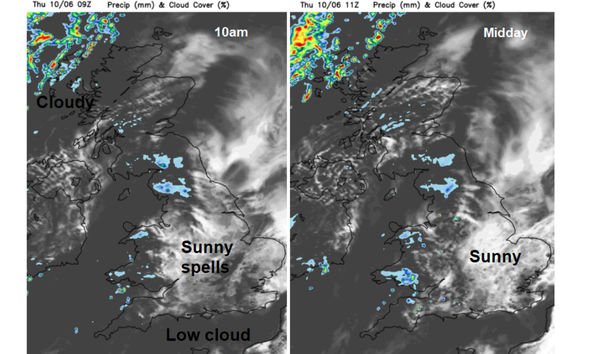 But will the UK’s weather hold out enough to let Brits see the partial eclipse?

Unfortunately, the Met Office is predicting cloud in some areas during the time the partial eclipse will be visible in the UK.

The BBC weather forecast also states it will be cloudy during the two hours of the eclipse.

BBC weather forecaster Sarah Keith-Lucas said today of weather during the eclipse: “The forecast is for a weak weather front to bring a bit more cloud across northern and western parts of the UK, with the best chance of viewing the eclipse further south and east, where high pressure is holding on.”

DON’T MISS
Astronomer’s top tips on viewing the partial solar eclipse this week [INSIGHT]
Preacher warns ‘Ring of Fire’ eclipse is an end of the world sign [ANALYSIS]
What is the best place to see the Ring of Fire eclipse from? [EXPLAINED]

So those in the south and east of the UK have a better chance of spotting the partial solar eclipse.

Netweather explains of the forecast tomorrow: “The day will start off quite grey but the cloud inland and particularly over eastern and SE Britain will thin and break and there will be sunshine with clear spells.

“Closer to the front in the far NW the cloud remains.

“So, if you do want to have a look on Thursday morning, remember to look SE with your suitable filter and before midday is the peak of this partial solar eclipse. 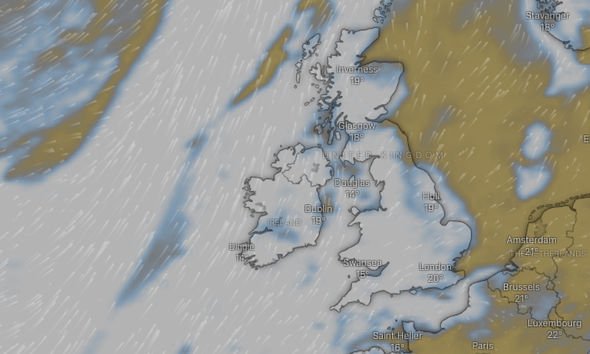 “The shadow will be from the top to NW of the sun’s disc.”

Be advised you should never directly look at the Sun, this includes during a solar eclipse.

Looking directly at the Sun can cause severe damage to your eyes, and even cause permanent blindness.

The Royal Museums Greenwich are streaming it live on Thursday morning from the Royal Observatory – so you can watch there if your view is obscured by cloud.

The UK Space Agency warns: “t is not safe to look directly at the sun, or point optical equipment, such as cameras, binoculars and telescopes at it.

“Even when partially eclipsed, eyes and equipment can be damaged instantly.

“Specially made filters and glasses are available, through which you can safely observe and photograph the sun, but these must be checked carefully first, to ensure they are not scratched or damaged.”