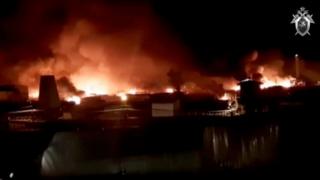 A fire has engulfed large parts of a prison in Russia’s Siberia region following a riot by inmates who accused guards of mistreating them.

The area around the high-security Penal Colony No 15 in Angarsk has been sealed off and security forces deployed.

There are reports of casualties but their number is unclear.

Russia’s penal service said inmates had “attacked a guard” who had to be taken to hospital.

Officials said the unrest was under control and investigators had opened an investigation.

However, human rights groups said rioting had broken out after an inmate was beaten by a prison officer.

One group published a link to a video of an inmate with bloody bandages around his arm who said he had been choked and beaten by guards and had then cut his wrists in protest.

A spokesperson for the group Siberia Without Torture told AFP news agency riot police had surrounded the prison and a fire was raging on the grounds.