Lee Man-hee heads the Shincheonji Church of Jesus, which is linked to more than a third of South Korea’s total cases. 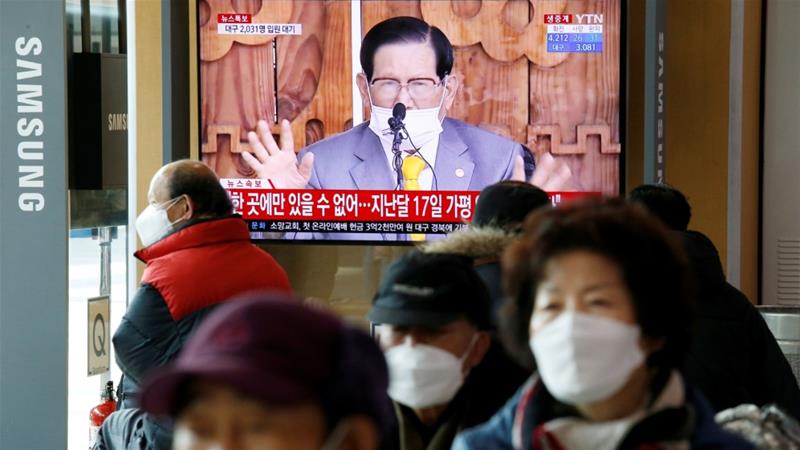 Authorities in South Korea have arrested the founder of a secretive Christian sect at the centre of the country’s largest coronavirus cluster on charges of obstructing the government’s efforts to contain the outbreak in February and March.

Lee Man-hee is the powerful head of the Shincheonji Church of Jesus, which is linked to more than 5,200 coronavirus infections, or 36 percent of South Korea’s total cases.

The 89-year-old was taken into custody on Saturday after a court in Suwon District granted an arrest warrant over prosecutors’ concerns that he could tamper with evidence.

Prosecutors allege Lee conspired with other sect leaders to withhold information from authorities, including their meeting places and the number of participants at their gatherings as authorities tried to trace infection routes in February.

Lee is also suspected of embezzling about 5.6 billion won ($4.7m) in church funds, including about five billion won which he allegedly used to build a retreat, Yonhap news agency reported.

He has previously described the novel coronavirus as the “devil’s deed” to stop the sect’s growth. The church currently has more than 200,000 followers.

Judge Lee Myeong-chul said “there have been circumstances indicating systematic attempts to destroy evidence” and considering Lee’s status, “it cannot be ruled out that there will be similar attempts in the future”.

Lee and his church have steadfastly denied the accusations, saying they were cooperating with health authorities.

In a statement, the church said Lee was concerned about government demands for members’ personal information but never tried to hide anything.

“The court’s issuance of an arrest warrant doesn’t mean a guilty verdict. All possible efforts will be made to unveil the truth in the upcoming court trials,” it added.

Seven other officials from the group were indicted on July 28 on charges including violation of the infectious disease control law and obstruction of justice, according to Yonhap.

Three of them were arrested on July 8.

Lee apologised back in March for the spread of the disease, after the sect’s branch in the southern city of Daegu emerged as the biggest cluster in South Korea.

Health authorities used an aggressive test-and-quarantine programme to contain the outbreak in Daegu and nearby towns by April, but the country has seen a resurgence of the virus in the Seoul metropolitan area since late May.

Officials in the East Asian nation of 52 million announced 31 new cases Saturday, taking the total number of infections to 14,336. At least 301 people have died.