A 79-year-old woman is the country’s first death from the coronavirus disease, COVID-19. 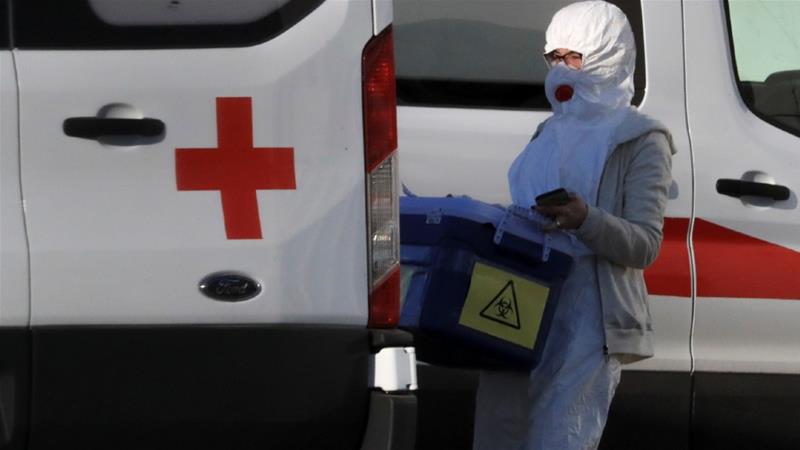 Russia said on Thursday a 79-year-old woman with underlying health issues who tested positive for the new coronavirus had died from pneumonia, the country’s first confirmed death resulting from the virus.

Russia, which has temporarily barred entry to foreigners and imposed an array of flight restrictions, has reported 147 coronavirus cases so far, less than many other European countries.

That figure has risen sharply in recent days, however, but authorities have said the situation is under control and that most infected people have entered Russia from coronavirus hot spots.

Some doctors have questioned the veracity of Russian data, given what they say is the patchy nature of testing. But the government has said it has been transparent about its handling of the crisis, and that its statistics are accurate.

Moscow’s coronavirus crisis centre said in a statement on Thursday that the elderly woman who died had begun receiving treatment last week in a private clinic before being moved to a hospital specialising in infectious diseases.

It did not say where the woman was thought to have picked up the virus but said her circle of close acquaintances had been identified and was under medical observation.

None of them was displaying any serious coronavirus symptoms, it said. Russians above the age of 60 were strongly advised to minimise contact with other people, it added.

“The main message of the government is not to panic and that everything is under control,” said Al Jazeera’s Step Vaessen, reporting from Moscow.

“But there is a lot of concern, of course. People don’t trust the low number of cases the government is reporting, and are worried that the government is hiding the true story – something, of course, they have experienced a lot in the past. Even the comparison with the Chernobyl nuclear explosion has been made.

“People have been panic buying – also out of experience, that food could come in short supply.

“There are different schools of thought here. There are experts who believe that Russia, by quickly closing the border with China, did manage to keep the infections low. Also, there were quarantine rules in place for people coming from affected countries, with very high prison terms if violated.

“But there are also many experts who believe that we simply don’t know how widespread the virus is at this stage. The government has centralised testing, which is done by one Siberian-based company – and experts have called this test unreliable. Other companies who have developed tests are not allowed to sell them.

“Also, doctors have said they did not report suspected cases of COVID-19 because they were worried patients would be sent to a government facility where they could be put in the same room with other patients, and face an even more dangerous situation. Doctors also did not report because they were worried they would have to close their practice because of the fear of spreading the virus.

“One sign that things could be a lot worse is the sudden increase of pneumonia cases – up 37 percent, to 2,000 cases.

“Another sign is that the government in recent days has also tightened its measures, closed borders for all foreigners until May 1, closed schools, and the elderly have been advised to stay home.

“And a 500-bed infectious diseases hospital is being built outside of Moscow, which should be done by next month. That’s another big issue – the lack of proper healthcare has been a big issue in the past few years, and people wonder how the government is going to cope when the virus becomes widespread. The government says they have 12,000 intensive care beds and a population of 147 million, but questions are being raised about the condition of healthcare facilities and their equipment.

“Streets here still look normal and busy. People are still going about their usual business. The Metro is less crowded, though people are taking their cars, causing huge traffic jams.”

More than 218,900 people have been infected by the novel coronavirus across the world and 8,926 have died, with cases and deaths outside China overtaking those in the country where the outbreak began, according to a Reuters tally. Infections outside China have been reported by 172 countries.