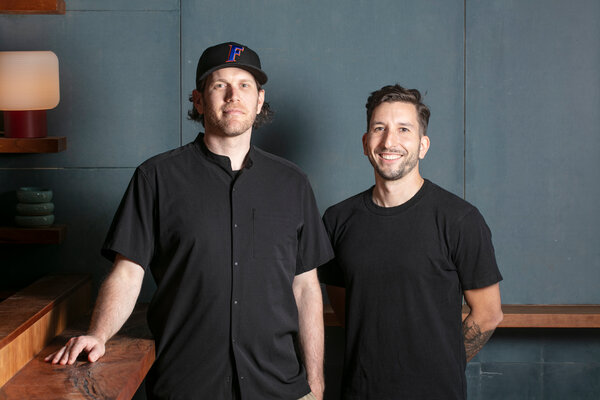 Like many restaurants making their debuts now, this sushi specialist was supposed to open in the spring but had to postpone because of Covid-19. The wait is over. Though the majority of the city’s sushi restaurants import fish from Japan, this one gets its seafood, like fluke and yellowfin tuna, locally in an effort to reduce its carbon footprint. The owners are Jeff Miller and Yoni Lang, formerly chefs at Uchiko in Austin, Texas, and TJ Provenzano, a wine expert. The restaurant, designed by Anna Polonsky, has a large central bar, now seating just 10 for a 15- to 18-course tasting menu ($150 including tip). There is outdoor seating for 20. The tasting menu is also sold to go (pickup and delivery). There is an à la carte menu of small plates, including amberjack ceviche, sunchoke miso soup and spicy lobster rolls. (Opens Friday)

The popular seasonal market, which started five years ago and is usually packed with vendors, has been canceled for this year. John Wang, the founder, cited the pandemic’s social distancing regulations as reason for the cancellation. Instead, the market is returning to Rockefeller Center, where they ran a small outpost last summer. There will be a rotating selection of six vendors, from 11 a.m. to 5 p.m., through Nov. 30: Joey Bats Cafe serving Portuguese egg tarts; Treat Yourself Jerk Chicken for Jamaican food; The Fried Kitchen, with chicken sandwiches and chicken and waffles; Mamika’s Homemade serving food from Bali; La Braza for Ecuadorian empanadas and giant Ecuadorian corn; and DiLena’s Dolcini selling Italian sweets. (Wednesday)

Jim Lahey opened a branch of his Sullivan Street Bakery almost on a whim. “It seemed right to me,” he said. He’s serving just bomboloni, sandwiches, soups and hot chocolate, plus his baked goods to take away. There’s no seating inside, but a sidewalk bench is coming. “I’m calling it a pop-up, but we expect to be open through the holidays and maybe longer if things work out,” he said. To promote good will, he said he’s giving customers 20 percent more than what they ordered and charging 20 percent less. Open Wednesdays through Sundays.

On hold since March, this uptown branch of an Italian restaurant group has opened at 25 percent capacity for indoor dining, with additional outdoor seating. The chef and an owner, Philip Guardione, a native of Sicily, is serving lunch and dinner, with pastas like maccheroni alla Norma and bucatini cacio e pepe among his specialties.

This restaurant, a nonprofit that trains refugee workers in the hospitality business, was doing only virtual training, which will continue, but it will now resume its in-person training program, accepting four students. Most of what the students prepare is donated to the needy. Takeout meals will be available later this month, and outdoor seating will begin in November.

This sprawling restaurant group, which is gradually reopening a number of its properties, including Cathédrale, Tao and Lavo, has added a new Italian venture, Luchini Italian, with food sold only for delivery. The menu includes pasta to mix and match shapes and sauces, and pizzas to add your own toppings. Tao Uptown has added a kit for making sushi hand rolls at home, $150 and $275.

Travelers equipped with premium American Express and select Delta Air Lines credit cards can now relax and refuel at this spacious new lounge on two floors run by American Express. In the interest of health and safety, the food, by Ignacio Mattos of Estela and Café Altro Paradiso, will be served by American Express personnel, instead of set out on an open buffet. A speakeasy-style bar, called 1850, has drinks created by the mixologist Jim Meehan.

When Ignacio Mattos’s Estela was set up in September as one of the seasonal outdoor pop-ups selling picnics in The Rink at Rockefeller Center, it offered a clue that Mr. Mattos might have a more permanent establishment coming to the Midtown complex. After all, the other Rink participant was Frenchette, which will be opening in the former Brasserie Ruhlmann space. Well, sure enough, Tishman Speyer, which owns and runs Rockefeller Center, has announced that this Neapolitan cafe and bar, Mr. Mattos’s latest venture, will be serving breakfast, lunch and aperitivos, plus takeaway dinners. It will also have a bakery and a retail counter, and will open early next year. It will occupy the space that was formerly Bouchon Bakery.

Chefs on the Move

The annual culinary festival, held in San Sebastián, Spain, went virtual this year. Among the topics highlighted at the congress, which ran from Oct. 5 to 9 and drew chefs from around the world, was African cuisine under the heading, Black Cuisines Matter. The topic was notably represented by two New York chefs: Pierre Thiam, an owner of Teranga in Harlem, has a line of African food products and has written several cookbooks; and JJ Johnson, a notable Black chef behind the popular FieldTrip, also in Harlem. Also on the program were Selassie Atadika, the chef at Midunu in Accra, Ghana; and Maura de Caldas, a Black chef from Colombia at Los Secretos del Mar in Bogotá, where she specializes in Pacific seafood. Information is available at sansebastiangastronomika.com.