BBC Weather: Queen's funeral to be blanketed in cloud

Ben Rich, BBC weather presenter, has said “cloud will play a big part in Monday’s weather story” but he is hopeful it will stay “largely dry” for the Queen’s state funeral. There appears to be an increasing risk of “damp weather” as the week develops, Mr Rich said, but the current climate is being protected by a high pressure system that appears to be preventing the rain. The forecast follows a cold start to Monday that left many people scrambling in the low temperatures to see the Queen lying in state before 6.30am.

Mr Rich said: “Cloud will play a big part in Monday’s weather story, possibly thick enough at times to give some spots of rain, maybe the odd shower.

“But it will largely stay dry and I am hopeful that it will stay dry in London and Windsor for the Queen’s state funeral.

“High pressure is still in charge. That is keeping us mostly dry, but this weak, warm front is introducing more cloud and the chance of the same damp weather first across southwest Scotland, perhaps across northwest England.

“This band  of thick cloud does tend to move eastward as the day wears on. Northeast Scotland will see some good spells of sunshine though. Northern Ireland may brighten up for a time. Wales and the southwest of England should see some sunny spells. 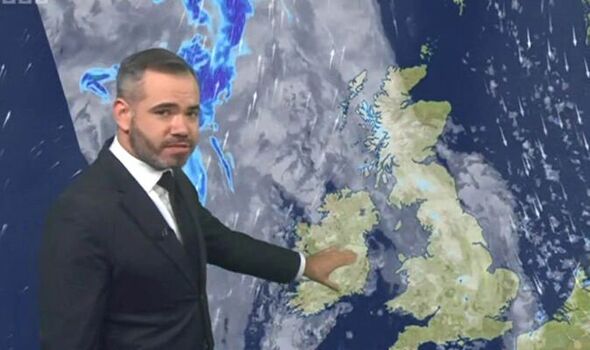 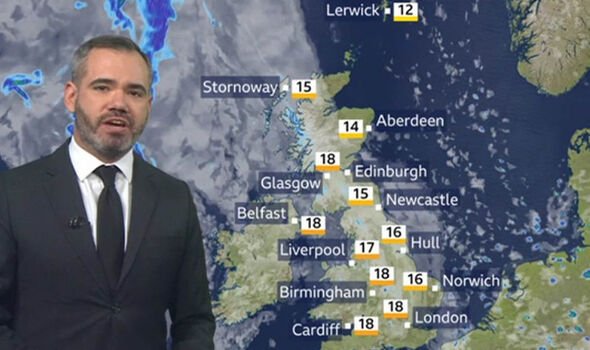 “Temperatures North and South between 12 and 19 degrees. The winds, for most places, will be fairly light.

“Now through Monday night, we will see large areas of cloud still potentially giving some spots of rain. Some drizzle in eastern parts and some clear breaks out towards the west, they may well fill in with some mist and fog, a little milder than it has been over recent nights.

“Tuesday, well we stick with a rather cloudy theme. This stripe of cloud here is still giving rise to some spots of rain and drizzle.

“But it does look like the cloud will tend to turn over and pick up a little bit across western parts to give some sunny spells. Bit more patchy rain across the western isles of Scotland.” 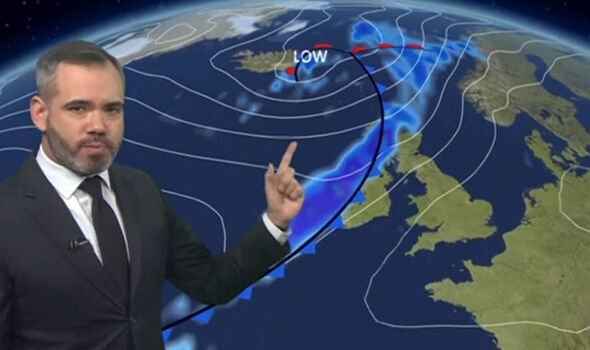 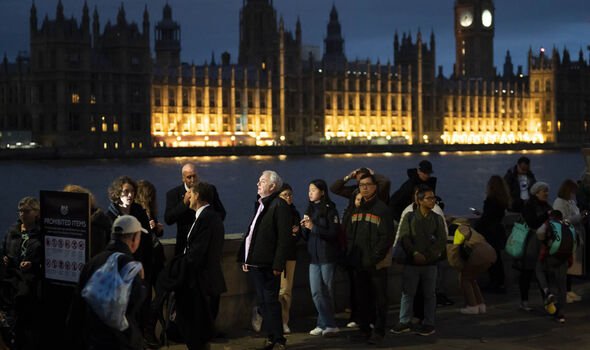 The final few thousand people to pay their respects to the Queen lying in state in Westminster Hall on Monday morning battled with cold temperatures.

Pictures showed many of them dressed in blankets and clutching hot drinks as they braved the queues.

The Met Office had issued a warning to Londoners that there was the prospect of another “cold night” but that did not appear to deter well wishers.

And while it has warmed up into Monday, there is still the threat of rain both in London and Windsor, a prospect officials will be hoping to avoid. 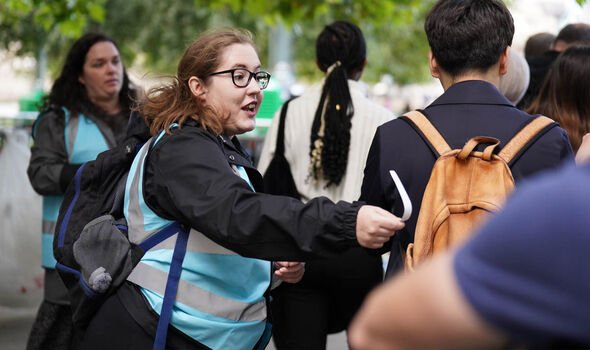 Moving into the later parts of this week, the spotty rain is expected to make way for heavier showers, with the high pressure system dissipating.

On Wednesday, the north of the UK is predicted to experience unsettled conditions.

It will be largely cloudy with strong south-westerly breeze and spells of rain throughout the day.

Thursday will see a band of heavy and persistent rain sweeping through from the north-west, reaching central England by the end of the day.