Russia: Expert says Putin 'trying to trade options for himself'

Ukraine has accused Russia of a “terrorist attack” that caused two major leaks in two gas pipelines to Europe. Ukrainian Presidential adviser Mykhaylo Podolyak said the damage to Nord Stream 1 and 2 was “an act of aggression” towards the EU. He tweeted: “Gas leak from NS-1 [Nord Stream 1] is nothing more than a terrorist attack planned by Russia and an act of aggression towards the EU. Russia wants to destabilise the economic situation in Europe and cause pre-winter panic.” Seismologists reported underwater blasts before the leaks emerged. Bjorn Lund of Sweden’s National Seismology Centre said: “There is no doubt that these were explosions.” 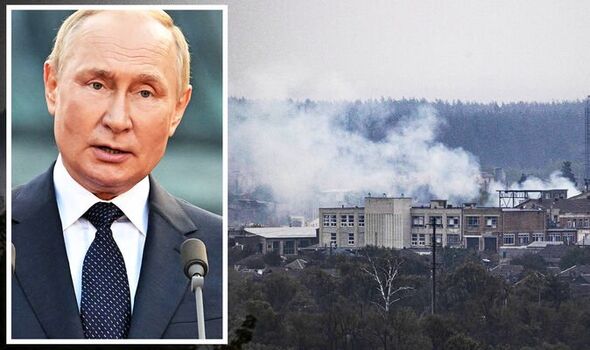 Russia has increased its defences because the Ukrainian advance now threatens pseudo-referenda in the Donbas, according to the latest intelligence briefing from the British Ministry of Defence.

The briefing said: “Ukraine has pressed its offensive operations in the north-east of the country over the last few days.

“Units are making slow advances on at least two axes east from the line of the Oskil and Siverskyy Donets rivers, where forces had consolidated following their previous advance earlier in the month.

“Russia is mounting a more substantive defence than previously, likely because the Ukrainian advance now threatens parts of Luhansk Oblast as voting in the referendum on accession to the Russian Federation closes.

“Heavy fighting also continues in the Kherson region where the Russian force on the right bank of the Dnipro remains vulnerable.

“Russia continues its grinding attempts to advance near Bakhmut in the Donbas even while it faces severe pressure on its northern and southern flanks.

“This is likely due to political pressure as Russia is using forces that could otherwise reinforce the other flanks.”

Good morning from London. I’m Tara Fair, I’ll be bringing you all the latest developments on the war in Ukraine. Please feel free to get in touch with me as I work if you have a story or tips to share! Your thoughts are always welcome.