Carol Kirkwood has warned of up to “45 miles per hour” winds in parts of the UK as a band of rain sweeps downwards through the nations. Speaking to BBC Breakfast, the weather presenter said while many are set for a mild Wednesday night, it will become wetter moving into the weekend. The band of rain, currently heading up from the southwest into Scotland, is predicted to descend from up north into England and then Wales, and Northern Ireland.

Ms Kirkwood said: “You can see a lot of us still in double figures and we’ve had some clear skies down towards the south, temperatures are that little bit lower at eight degrees.

“We still have high pressure clinging on in the south but we have got an array of weather fronts in the northwest.

“They are fairly weak at the moment, producing some rain, the rain a little bit heavier than it was yesterday, and the wind will strengthen a little more as we move southwesterly.

“It’s because of the wind and clouds in the southwest that we are seeing temperatures that are a little bit higher. 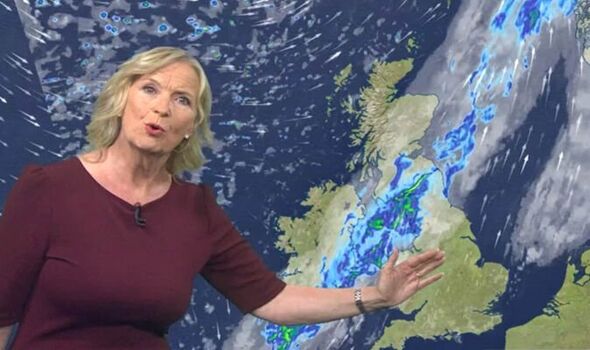 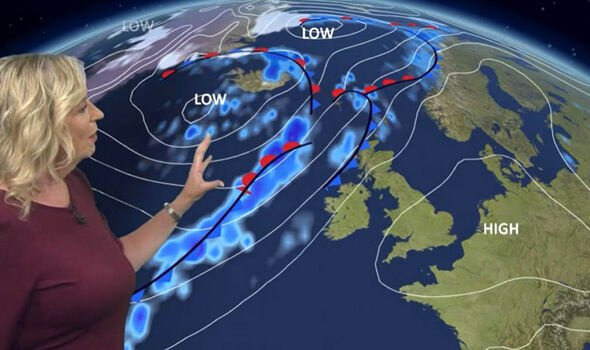 “For the rest of us away from that band of rain, we are looking at some fog to start with, that will leave, then it is a day of some bright, sunny spells, with temperatures up to 21 degrees.

“Heading on into the rest of the afternoon and evening, you can see how light the winds are going to be for much of the country, except actually in the northwest where it will be gusty. The gusts could be as much, later, as 45 miles per hour.

“Overnight, the rain comes in, bringing in some heavier bursts. It will be more persistent as well across the northwest of Scotland and also into Northern ireland. Some of that pushing into the fringes of Cumbria. 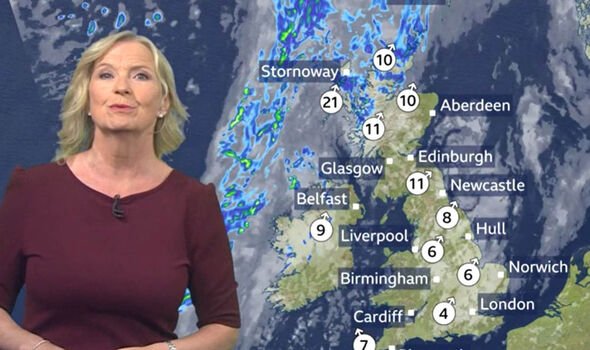 “Push south, with clear skies and light winds, some will see some mist and light fog forming once again, but it is going to be another mild night.

“Tomorrow, this weather front producing all of this rain very slowly pushes southward, taking more of it across parts of England and also North Wales.

“Behind it, there are one or two showers in Scotland and Northern Ireland but dried and brighter, the wind dropping.

“And ahead of it, the temperatures are going to continue to build, up to around 19 or 20, but we are starting to pull in some fresher conditions behind that front.” 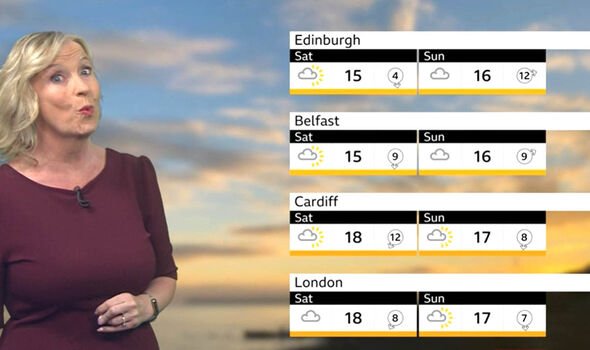 But all hopes of a long, dry weekend in the south look in vain as the oncoming rain looks like it may be heavy and slow to clear.

Brighter spells are expected across some areas of southern and central England with a few showers.

Saturday will be mainly dry with spells of sunshine.

However, there will be variable amounts of patchy cloud cover and a chance of a few showers.

READ NEXT: US hurricanes to spark UK weather havoc in October – maps
Queen’s funeral to be blanketed in cloud ahead of ‘odd showers’
Temperatures to drop to chill-biting 6C as polar blast blankets UK
‘No heat escapes’ – how to slash cooking energy bills to 5p an hour
Household saves £325 a month on energy bills with ‘lifestyle hack’