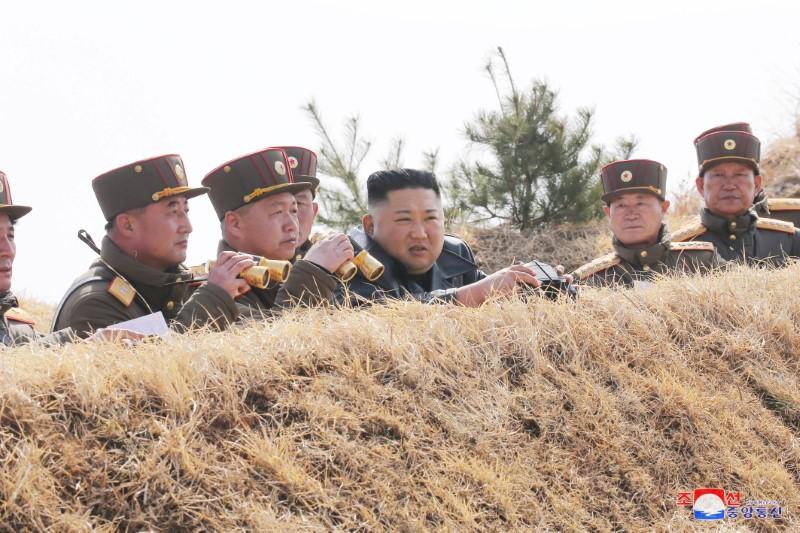 SEOUL (Reuters) – North Korea fired two projectiles that appeared to be short-range ballistic missiles into the sea off the east coast of the Korean peninsula, South Korea’s military said on Saturday, after what analysts said was a show of confidence during the coronavirus epidemic by announcing an April legislature session.

The launch follows two earlier this month, when North Korea launched short-range missiles and multiple projectiles, according to South Korea’s military, drawing U.S. and Chinese appeals for Pyongyang to return to talks on ending its nuclear and missile programs.

The suspected missiles were fired from North Pyongan province, South Korea’s Joint Chiefs of Staff said. The province is above Pyongyang on the northwest corner of the Korean peninsula, bordering China.

Japan’s coast guard said on Saturday that North Korea appeared to have fired a missile, which landed outside Japan’s exclusive economic zone waters.

Earlier on Saturday, North Korea announced it will hold in April a session of the Supreme People’s Assembly, its rubber-stamp legislature, in Pyongyang, which analysts had said would involve gathering almost 700 of the country’s leaders in one spot as the coronavirus spreads worldwide.

“If it goes ahead, it would be the ultimate show of (North Korea’s) confidence in managing the coronavirus situation,” Rachel Minyoung Lee, of the North Korea monitoring website NK News, said on Twitter this week.

North Korea has not reported any confirmed cases of the new coronavirus that was first detected in China late last year, though a top U.S. military official said last week he is “fairly certain” there were infections in North Korea.

State media KCNA also said on Saturday North Korean leader Kim Jong Un guided an artillery fire competition between combined units of the North Korean army on Friday, displaying photos of him watching with high-ranking military officers, all unmasked. It was unclear whether Saturday’s launch was part of the drill.