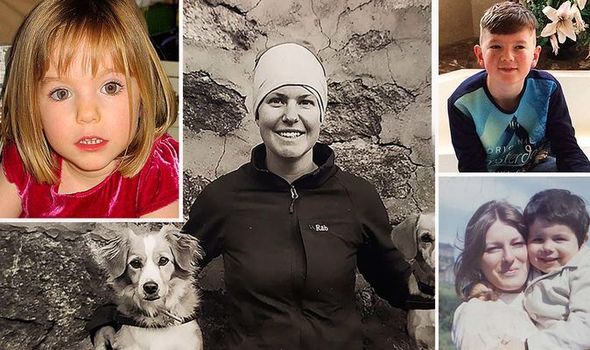 For 32 long years Denise Horvath-Allan has been desperately searching for her son Charles. In 1989, at the age of 20, the British man went missing while backpacking in Canada. Despite police investigations, and a total of 16 visits to Canada by Denise herself, Charles has never been found. In August last year, he was finally declared officially dead.

“The search for Charles has consumed my life,” says Denise who is now 71 years old and lives in west London. “It has drained my soul. It’s been horrendous. I still fight for justice for him every day.”

Charles had been staying at a campsite in the town of Kelowna, in British Columbia, when he was last seen in May 1989.

During his trip, he had regularly kept in contact with his family back in the UK. They were all due to meet up later that summer in Hong Kong. But the last communication Denise received from her son was a fax message in early May. She never heard from or saw him again.

Although Denise has now accepted her son must be dead, not knowing what happened to him causes her mental anguish.

“It gets worse, or more difficult, as time goes by, especially as I know I’m running out of time now,” she says.

“When you don’t know what happened, it torments the brain continuously. What did they do to young Charles? Why did they kill him? Was he crying out for his mum?

“I always believed if I worked hard enough and long enough, I would find the truth of his fate. But I guess, after 32 years, the odds are getting slimmer.

“Sadly, these last few years, I’ve had to come to terms with the fact that I may go to my grave never knowing the answers.”

Over the past three decades, Denise made frequent trips to British Columbia ‑ the last was in the autumn of 2018 ‑ meeting police, handing out posters of Charles, and questioning locals.

To fund her searches, she sold her beauty salon business where she used to live in West Yorkshire and used up all her savings.

Now all she has left is a Facebook page dedicated to finding Charles.

“We spent an inordinate amount of money in the search,” she says.

“We lost everything. Most families who have a missing loved one search until they financially cannot any longer, or until they’re too old.”

According to the Government’s Foreign, Commonwealth & Development Office (FCDO), an average of 600 UK citizens go missing abroad every year, the majority in countries popular with British tourists.

Spain is far and away top of the list, with 102 Britons reported missing there last year alone.

Certain cases, such as that of three-year-old Madeleine McCann who was abducted from her parents’ holiday apartment in Portugal in 2007, resulting in prolific media campaigns. Others barely see the light of day.

The FCDO advises anyone worried about a British national missing overseas to file a report with local police in the UK as well as with police abroad.

“We provide essential consular support to thousands of British people who need help abroad every year,” said a spokesman.

“This includes supporting the families and friends of Britons who have gone missing overseas, liaising with the local authorities and providing links to voluntary organisations who can offer further assistance at what can be an incredibly distressing time.”

LBT Global is one of those voluntary organisations that work with the FCDO. On its website, lbt.global, it features dozens of British travellers who have disappeared.

Many of the cases there are heartbreaking: Alex Batty, for example, who, aged just 14, went missing after going on holiday to Spain in 2017 with his mother and grandfather.

Or 37-year-old Esther Dingley, who was reported missing for nine months after hiking in the Pyrenees last year, and whose body wasn’t found until August this year.

Research published by the University of Portsmouth earlier this year shows that 60 percent of Britons who go missing abroad are male, and most fall into the 31 to 50-year-old age category.

Missing persons cases inside the UK are generally resolved within the first 48 hours. However, with overseas cases, people tend to go missing for far longer.

The research was led by Dr Karen Shalev Greene, director of the university’s Centre for the Study of Missing Persons.

She explains how most of the British people who disappear abroad ‑ over a third of cases ‑ do so through miscommunication, misunderstandings, lost documents, or when relatives simply lose contact with their families.

Other disappearances include those with mental health problems, children abducted by their parents, asylum seekers, refugees and runaways.

A smaller number of cases are people travelling to meet a romantic partner, or those fleeing domestic abuse.

Dr Shalev Greene stresses that, happily, foul play is rarely a factor, and that most people are reported missing due to poor communication.

Even in this age of global mobile phone coverage and social media, travellers often forget to check in with their families back home.

“Unless the person who is considered missing has been abducted, lost, injured or a victim of crime, they don’t consider themselves missing because they know where they are,” she explains.

“They don’t assume that other people will worry about them or miss them.”

Dr Shalev Greene has some advice for Britons travelling abroad: “We’d like to stress the importance of communication. Be mindful that relatives might worry. If you can communicate, it saves the worry and police resources.”

One person who knows this all too well is Michael Porter. For the last 12 years he has been pressing Greek police and judicial authorities over the disappearance and murder of his 53-year-old mother Jean Hanlon in 2009 on the island of Crete.

Jean had been working in a hospital in Dumfries when she decided to start a new life in a warmer climate, and moved to Crete in 2003.

Six years later, after meeting an unknown man in the port town of Heraklion, she disappeared. Her body was found four days later in the harbour.

Michael says local police tried to dismiss it as an accidental drowning, despite wounds suggesting there had been a struggle.

Jean had suffered shattered ribs and a punctured lung.

In 2019, after Channel 5 broadcast a documentary on the crime, a few witnesses came forward. But there has been no breakthrough in the investigation.

Michael has even written to the Greek prime minister to highlight the case further.

“The 12th anniversary of Mum’s murder has passed and we are still no nearer to getting justice,” says Michael, 36, an actor from London.

“The pandemic may have held things up and added extra struggles, but we are very much still fighting for justice and are determined we achieve this.”

At the Centre for the Study of Missing Persons, Dr Shalev Greene believes it’s inevitable this will coincide with a rise in disappearances.

What strikes her most about all the cases she has studied is the tragedy at the heart of each one. “The human story behind every missing case is always very moving,” she says.

“We’re always mindful of the impact any missing case will have on the relatives reporting it.

“Missing people are not just a number. They are a person, and a life.”