Storm Barbara will hit parts of the UK on Wednesday, bringing torrential rain and fierce winds to the East and South of England. Now the Met Office has issued fresh warnings for wind as gales of up to 65mph are forecast to hit.

The Met Office warns: “Strong southwesterly winds will develop on Wednesday morning, peaking around midday before gradually easing from the west during the afternoon.

The wind warnings are in place from 7am on Wednesday until 5pm the same day.

Forecasters warn to expect some delays to road, rail, air and ferry transport, delays for high-sided vehicles on exposed routes and bridges and some coastal routes, sea fronts and coastal communities could be affected by spray and/or large waves. 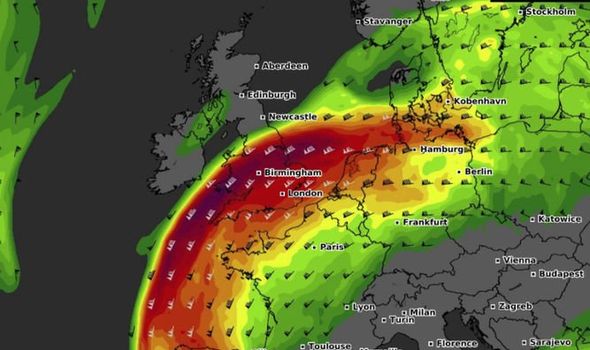 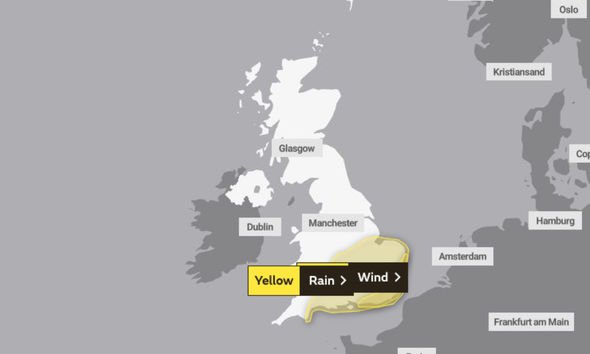 The Met Office warns: “Strong southwesterly winds will develop on Wednesday morning, peaking around midday before gradually easing from the west during the afternoon.

The forecasters have also cautioned of heavy rain across the south of England.

Met Office forecasters wrote on Twitter: “Heavy rain this Wednesday morning will bring a lot of surface water and spray, with strong winds in the southeast. Parts of eastern and southern Scotland will be drier and brighter”

Rain warnings are in place on Wednesday, across the East Midlands, East of England, London and South East England, South West England and the West Midlands.

The warning is in place from 3am to 2pm on Wednesday, and the Met Office cautions: “Heavy rain will move north during the early hours of the morning and persist through the peak morning travel period, before clearing northeastwards.”

“With much of this falling in a short period, around three to six hours, some surface-water flooding is likely in places, leading to disruption to travel.

“The rain may be accompanied by gales across parts of southeast England, perhaps most likely towards the Kent and Sussex coasts.”