Heavy snow will bring widespread travel disruption this weekend as Storm Darcy sweeps in, bringing gusty winds and wintry conditions. A swathe of the UK is under snow and ice warnings from the Met Office today, with flurries mainly affecting many northern and eastern parts of the UK. But the weather system will soon make it’s way down south, bringing further snow showers – even in the capital – where many places may see “blizzard conditions”, the UK’s national forecaster warned.

Today’s yellow alert, which is in place from 3pm today until 11.59pm tomorrow, reads: “Cold air, along with snow showers to low levels pushing inland from the North Sea, is expected to spread south during the weekend.

“Not all locations will see snow, with the showers likely to miss some places altogether. In addition to the showers, there is a potential that an extended period of more persistent snowfall could impact parts of the East Midlands overnight Saturday and through Sunday.

“This is all likely to bring areas of accumulating snow through the period with some icy stretches developing, with many parts seeing 2-5 cm of snow, with 10-15 cm possible, especially above 200 m in northern England and Scotland.”

Elsewhere, snow will become persistent in Scotland, which is under an amber warning until midday, with “some high ground exposed to strong easterly winds could see as much as 50cm [of snow] building up by Saturday morning.” 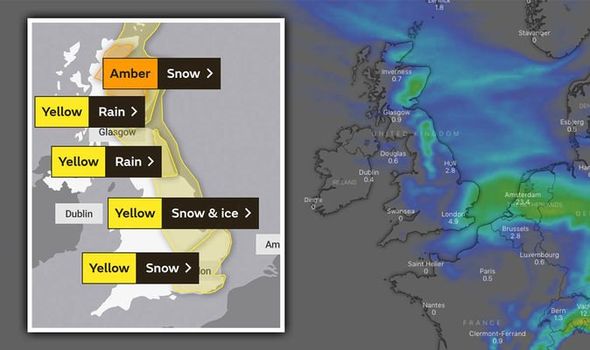 Another amber alert, which was issued on Friday and in place on Sunday, has now been extended this morning as even more of the country is due to be impacted by the heavy snow.

The warning reads: “An area of widespread, persistent and occasionally heavy snow will affect parts of the southeast and east of England throughout Sunday and into Monday, with the potential for some significant accumulations across eastern parts of Norfolk, Suffolk, Essex and Kent.

“Accumulations of snow widely 5 to 10cm with the potential for 15 to 20cm in places and a small chance of 25 to 30cm over the hills in north Kent.

“Very strong easterly winds with gusts of 40 to 45 mph inland and 50 to 55 mph along north-east facing coasts, leading to significant drifting of lying snow. Later on Sunday evening, the snow will start to turn more showery.”

The warning is in place from 4am on Sunday morning until 9am on Monday, and affects a stretch of the south east, especially areas along the coast, from Norfolk down as far as Kent.

Storm Darcy, which was named bu the Dutch Met Service KNMI on Friday, is due to sweep in this afternoon and into Sunday bringing cold, strong winds of up to 55mph.

The gale-force winds will batter the Netherlands before heading to the UK’s south-east coastline, where the updated amber warning is in place.

Met Office Chief Meteorologist, Paul Gundersen, said: “The UK is in for a notably cold and snowy period over the next week, with very cold air in place over the whole of the UK by Sunday.

“Showers will see snow accumulating across eastern areas. Within the Amber warning area, more widespread snow is expected and we could see 5 to 10 cm of snow quite widely, with a chance that a few places could see 20 cm or more.

“With such severe weather around it’s important to keep up to date with the latest forecast.”