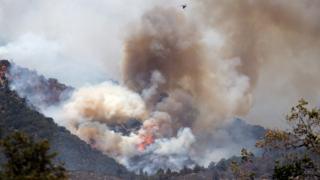 Fire crews in California are battling a massive wildfire that has forced thousands of people from their homes east of Los Angeles.

More than 1,300 firefighters, backed by helicopters and water-dumping planes, have been tackling the blaze dubbed the Apple Fire which started on Friday.

Parts of the fire are on steep, rugged hillsides, making it hard for fire engines to reach.

Around 7,800 residents have been told to evacuate the area.

Images show flumes of smoke filling the sky over the mountainous region. In a tweet, the National Weather Service said some smoke had blown east to Phoenix, Arizona – nearly 300 miles (482km) away.

The wildfire began as two adjacent blazes in Cherry Valley, an area near the city of Beaumont.

It has since stretched out to 20,516 acres (8,302 hectares), San Bernadino National Forest said in a tweet on Sunday.

The government body said the blaze had been fuelled by high temperatures, low humidity and dry vegetation in the area.

The US Forest Service told the Riverside Press-Enterprise, a local newspaper, that because the fire was on rugged terrain, it was dangerous for firefighters to try and surround it.

“We don’t want to put fire-fighters in a dangerous situation,” said spokesperson Lisa Cox. “It’s burning in a straight line up a mountain.”