Madagascar is on a frontline where there are no bullets being fired, no mortars being launched and no bombs being dropped. But its people are helplessly trapped in the centre of a war where the results are just as devastating.

Our Sky News team managed to get inside the country despite it still being cut off from the outside world because of coronavirus restrictions, to see the devastating effects of a prolonged drought.

We saw babies slowly dying from hunger while their mothers, weakened from lack of food themselves, pleaded for help.

We listened as village elders begged for assistance from the outside world as the community’s toddlers were reduced to eating cactus flowers. We walked along dry riverbeds which went on for miles and miles, where villagers were digging holes trying to reach water to drink. And everywhere, everywhere we went, we were confronted by adults and children, old and young, with their hands outstretched, hoping for anything which would help them survive another day.

The people of this stunningly beautiful Indian Ocean island are being starved and tortured – primarily, according to the United Nations, by the effects of climate change which is not of their making.

The UN has said the world’s fourth-largest island is on the brink of famine – and is likely to go down in history as the first brought on by extreme and unusual weather patterns. And this, suffered by a country not at war or in conflict but in peacetime and with virtually zero carbon emissions. 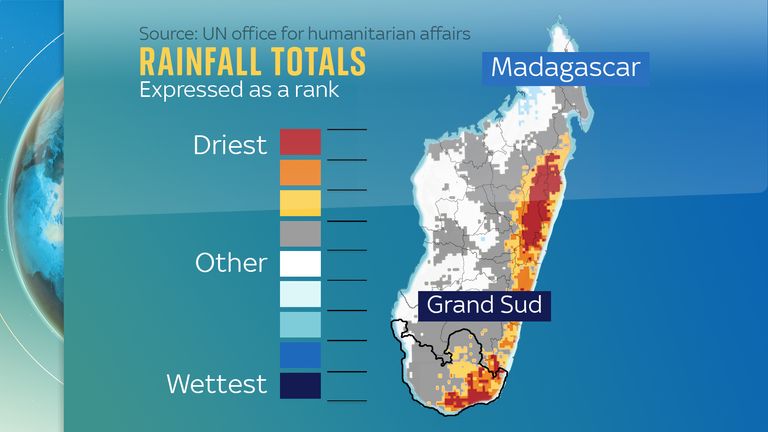 Famine is a challenging legal term with often contested international parameters. But whether famine in Madagascar is legally classified or not is a moot point to the Malagasy, the bulk of whom are living below the poverty line and earning less than two dollars a day.

The island has not only suffered the effects of an extended dry period with the worst drought in forty years – but it is subjected to multiple extreme weather patterns including several yearly cyclones, vicious winds and dust storms, known as tiomenas, which have buried villages and forced people to flee. The unpredictable and unusual weather has caused severe hardship to most of the population with more than a million deemed by aid agencies to be in “high acute food insecurity”.

The country, which is one of the most bio-diverse in the world, is now suffering from what Oxfam has called a “hunger pandemic”.

We visited the Monja Jaona hospital in Ambovombe, the principal medical centre in the Androy Region in the south of Madagascar.

We saw a tiny baby called Malalaza, so weak with hunger and illness, she doesn’t have the strength to cry.

As the nurse prods her extended stomach, all she can muster are breathy moans of protest. She is a year and two months old – a time when healthy babies will be walking and attempting their first words. 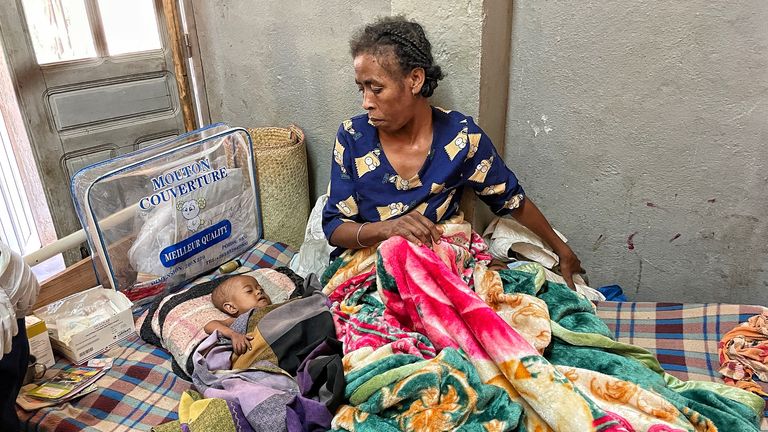 But Malalaza’s weight has plummeted in the last few weeks and she can’t even hold her head up. She can’t sit up. She can’t hold a spoon to her lips. She’s finding it difficult to do anything. Poor nutrition and a lack of food has left her open to illness and she’s contracted tuberculosis.

“The prognosis for her is extremely serious,” Rivo Razafison, the chief nutritionist from UNICEF tells us.

He believes many of the sick children he sees are hospitalised basically because of hunger which leaves them weak and prone to disease. The drought the country has been enduring has led to new levels of suffering amongst Madagascar’s poor.

It has meant water is hard to find and that has a knock-on catastrophic effect. It’s led to crops failing, even worse sanitation, more disease, increased poverty and higher levels of hunger and fear about how and where to find enough to eat. 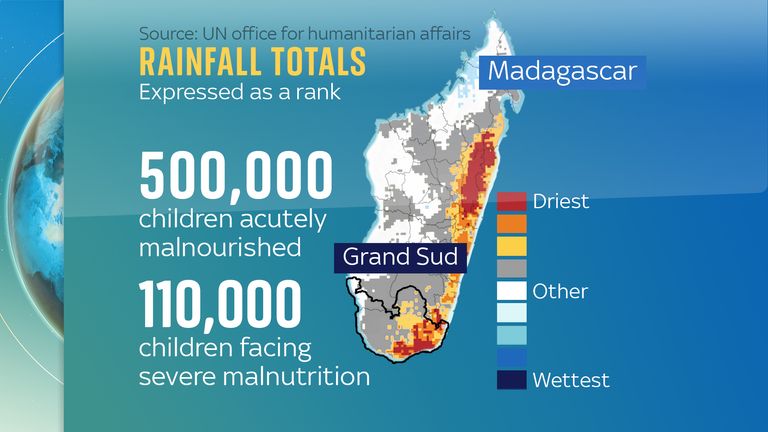 The global coronavirus pandemic hit when Madagascar was already in the midst of a tough drought. It meant the country had to close down and the tourism industry which was the island’s main source of hard currency, helping provide jobs and incomes, suddenly dried up.

The country is due to slowly open up to outsiders in November but so far, flights carrying those precious tourists have yet to start.

Even so, for more than a million people, rain at this late stage, as well as opening up the country to tourists again, may not be enough to halt their suffering and Malalaza may become one of the country’s climate change victims.

Malalaza’s mother Hopuso has five other children who she is caring for on her own. She has to walk at least ten kilometres a day to fetch water for her family and she tries to make money to buy food by chopping wood and making charcoal. 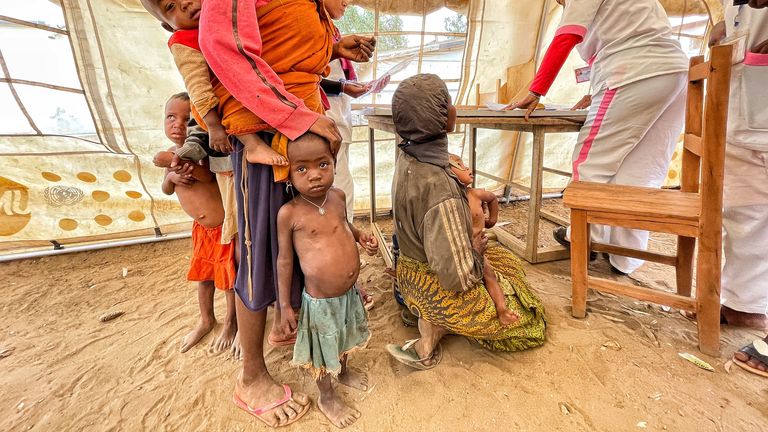 “Seeing how hard her life is, and all the physical work she has to do, perhaps this is what brought on the state of the child,” Rivo Razafison tells us.

Malalaza is a fraction of the size she should be at her age and weighs under five kilograms.

A good ten minutes or so is spent checking the medical notes to confirm her age because neither the medical workers nor us can believe how small she is. No one looking at her tiny frame believes anything other than Malalaza’s time on this earth is unlikely to continue for very much longer – despite the health workers’ best efforts.

Across the road from the hospital, UNICEF is running a health centre that is inundated with mothers and their babies who survive simply because of the food and medical aid being provided. There is a bedraggled crowd outside the tent where anxious mothers are waiting to have their babies weighed. There are heart-stopping moments as the dial on the hanging scale pinpoints whether the baby’s weight has gone up, down or stayed the same. Dying from hunger is a slow, and agonising death – but far too many people of Madagascar are going through just that right now.

Ten-month-old Soja Franco lost weight the week before but there’s a small moment of celebration as the scales tip in her favour this week. But the size of her arms still measures in the red. Small weight gain is a positive but it doesn’t mean these children are out of the danger zone.

Rivo Razafison is a Malagasy who has worked in the southern region for nearly two decades.

“In all the time I’ve been here, the worst year for drought was last year,” he says.

“And this year will get even worse according to the forecasts.” The trouble for the Malagasy is even if the drought lifts, even if there is average rainfall, a lot of the deep problems caused by the extended dry period have set in train multiple challenges from which it is going to be very difficult to recover.

Many people we spoke to had lost the ability to grow food to eat and were now turning to chopping down trees to make charcoal to sell. Because only 15% of the country have access to electricity, many rely on charcoal for fuel for cooking anyway – and now they’re grabbing at that as a source of income.

Many we spoke to admitted they knew this would add to the environmental problems: “But we have no choice”, is the constant refrain. 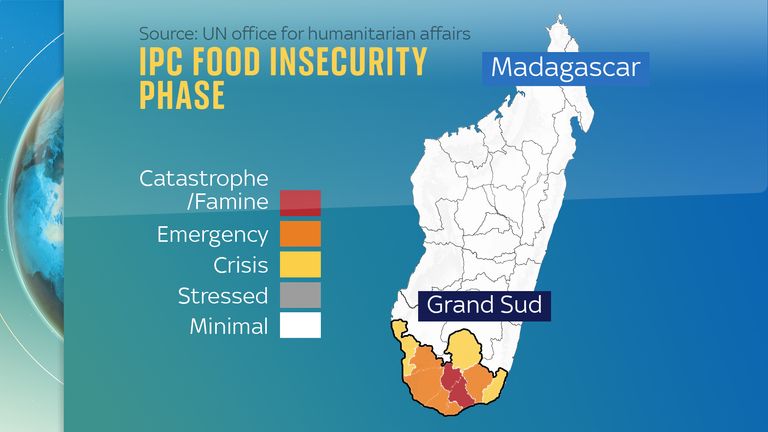 The island has seen about 40% of its forests disappear since the 1950s.

It is a truly alarming statistic in a country renowned for its beauty and unique ecosystem, where most of its mammals and plants exist nowhere else on the planet.

There are governmental efforts to try to stem the decline. There are numerous fresh tree plantations to try to halt the massive soil erosion. But it all feels very small fry in the face of mounting odds against.

True, it’s not solely climate change to blame but it is a massive and almost certainly the main factor. The aid agencies complain about decades of poor governance and there have been bouts of political instability in the country since independence from the French colonisers in 1960.

However, the most recent presidential elections were held peacefully with Andry Rajoelina elected, after first coming to power in a coup in 2009.

Recently the government arrested scores of people accused of attempting to assassinate President Rajoelina, including former soldiers and military personnel. The president’s office dismissed this as the work of a mentally-deranged individual and not symptomatic of widespread political instability.

But the pandemic has been catastrophic for the island.

Subscribe to ClimateCast on Spotify, Apple Podcasts, or Spreaker.

Before COVID, the World Bank forecast a GDP growth of 5.2%. Instead, it shrank by 4.2% while the population continues to rise by nearly 3% each year. Almost everyone we spoke to had large families. One father we met had 16 children.

“Every child is a blessing from God,” one mother told us.

A blessing but also another mouth to feed when there’s little food to go around. The price of rice has shot up and the country’s recent harvest of the staple cassava has shrunk by nearly 90% in some areas.

But Madagascar’s contribution to the world’s natural riches are enormous and cannot be understated. There are more than a hundred species of lemur for example – all living only in Madagascar. They are currently considered the world’s most endangered mammals. Few Malagasy will be looking at what’s going on in Glasgow this fortnight. Few will be able to, perhaps fewer believe whatever happens there will have any significant impact on their lives. The population here isn’t contributing to the carbon emissions which are blamed for creating climate change but those living here are at the sharp end of its effects.

And babies like Malalaza are paying a very high price for the actions of those in far richer countries.