The outspoken eurocrat appeared on the “Face the Nation” show on CBS News to answer questions from the Elysee Palace. Mr Macron was quizzed on a variety of subjects, beginning with the Covid pandemic continuing to sweep through both the country and Europe as a whole, as well as the much-criticised vaccination rollout. But the French President has sparked a furious backlash with comments he made on race and the history of his country.

CBS journalist Margaret Brennan asked: “Mr President, race is a very heated topic in this country right now, and I want to ask you about something you recently said.

“France is a former colonial power, but you said in comparison of our two countries, ‘I’m sure of one thing, we are not the United States of America.

“‘We have a preference for equality that is founded- that is not found in the US. Our values are not quite the same. We have an attachment to social democracy, to more equality.” What do you mean by that?”

Mr Macron was quick to respond, insisting the US had been confronted with segregation, but this was not the case in France. 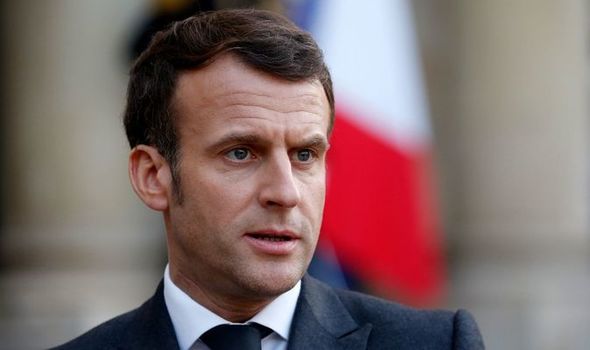 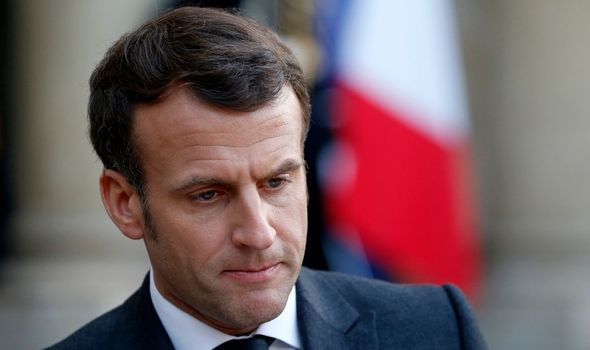 He replied: “I think the United States and Europe are facing common challenges, arrays of inequalities and hatred speeches and so on, and tensions in our societies. And race arrives, I would say on top of that, because we didn’t fix this issue. This is an existing question in our society.

“In your society, you had segregation and you managed to precisely react and reorganise your society in the 60s with positive and affirmative action and nuclear policies, in order to deal with this phenomenon.

“Our history is very different because we were colonial states and we are now- we- we are at the centre and we were and we are still contraries of immigration with a lot of people coming from former colonies and from, for instance, African continent.

“And we have definitely this question of race, which is at the very core of our society, and creating a lot of tensions where when people basically are victims of discrimination and when people are pushing racist speech, racism or unacceptable speeches.” 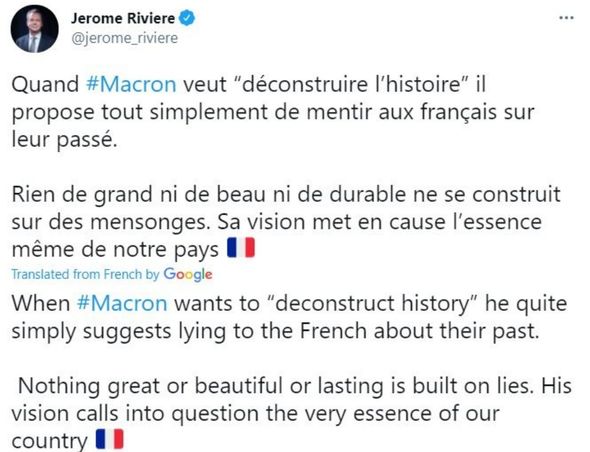 Mr Macron claimed France is confronted with “many tensions when people are victims of discrimination” but has sparked fury when outlining the platforms launched to fight against this discrimination by warning the country needs to “deconstruct” its own history.

He added: “My conviction is that we have to address this issue by first transparency and fair assessment. This is why I launched new platforms to fight against discrimination, racism and so on.

“Second, a quiet and open dialogue to understand how it happened and in a certain way to deconstruct our own history. 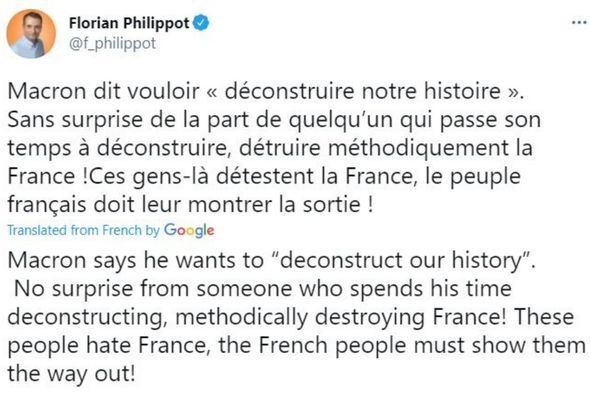 “So I think we need basically to go to the very roots of this phenomenon. But we need to launch new, concrete and determined policies to get rid of racism in our society. This is critical.”

The French President sparked a furious reaction from his political rivals, with MEP Jerome Riviere tweeting: “When Macron says he wants to deconstruct history, he quite simply suggests lying to the French about their past.

“Nothing great or beautiful or lasting is built on lies.

“His vision calls into question the very essence of our country.” 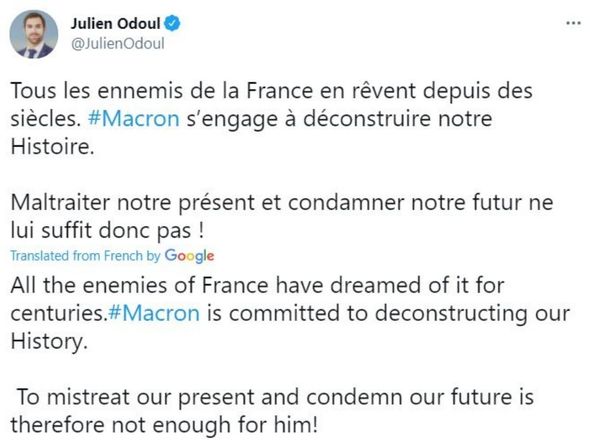 “No surprise from someone who spends his time deconstructing, methodically destroying France!

“These people hate France, the French people must show them the way out!”

French political rivals The National Rally lashed out on Twitter: “Deconstructing our own history – this is the real project, expressed on American television, of a President who makes the French feel guilty and who does not like the history of France.”

National Rally politician Julien Odoul also raged: “All the enemies of France have dreamed of it for centuries. Macron is committed to deconstructing our history.

“To mistreat our present and condemn our future is not enough for him!”