(Reuters) – The number of confirmed infections of the novel coronavirus exceeded 1.38 million globally and the death toll crossed 81,400, according to a Reuters tally as of 0200 GMT. 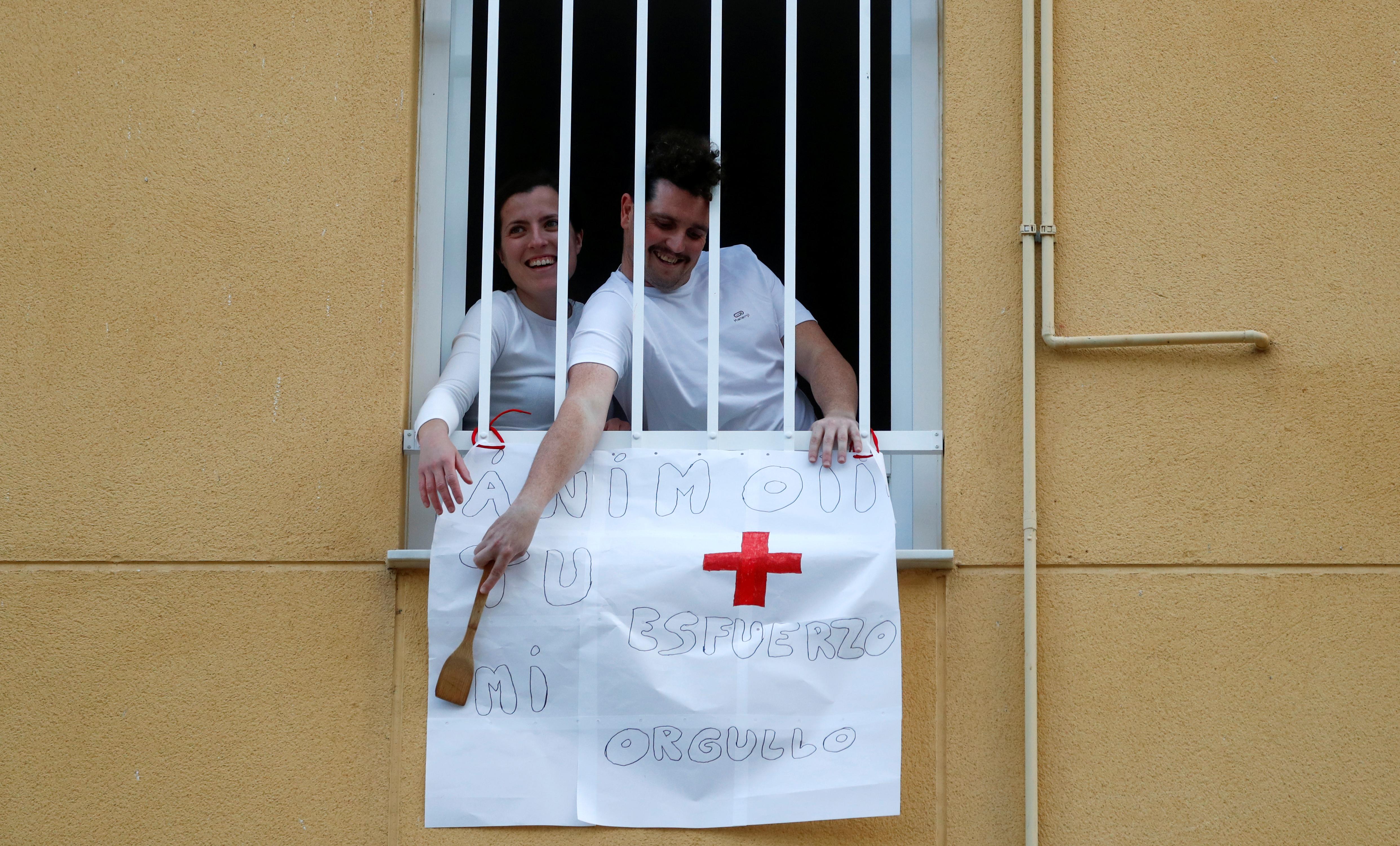 * For an interactive graphic tracking the global spread, open tmsnrt.rs/3aIRuz7 in an external browser.

* U.S.-focused tracker with state-by-state and county map, open tmsnrt.rs/2w7hX9T in an external browser.

* Spain’s daily deaths rose on Tuesday for the first time in five days, with 743 people succumbing overnight compared with 637 in the previous 24 hours. Total cases rose to 140,510 and the death toll was at 13,798.

* British Prime Minister Boris Johnson was set to spend a second night in intensive care on Tuesday, while his foreign minister led the government’s response. Cabinet Minister Michael Gove said he was self isolating as a family member has symptoms.

* In the Swiss Army’s biggest call-up since World War II, thousands of soldiers have been sent to support health workers, while hundreds have been confined to barracks after potential exposure.

* France has officially registered more than 10,000 deaths from coronavirus infections on Tuesday, becoming the fourth country to go beyond that threshold.

* Norway will ease some restrictions, its prime minister said.

* Finland will start tracking the spread in its population with randomised antibody tests.

* Vietnam donated 550,000 face masks to five European countries on Tuesday.* Ireland’s chief medical officer said he did not expect to be able to recommend a lifting of severe restrictions by April 12.

* Czech lawmakers approved keeping the country under the state of emergency until April 30, a shorter extension than the government had sought.

* The first patients have been admitted to the new Nightingale Hospital in London, which has been set up in just nine days at the Excel Exhibition Centre. The facility will provide up to 4,000 beds equipped with ventilators and oxygen. AMERICAS

* U.S. President Donald Trump said the United States might be getting to the top of the “curve” of the coronavirus outbreak and reiterated that he wants to get the U.S. economy reopened soon.

* New York state is nearing a plateau in number of patients hospitalized, Governor Andrew Cuomo said, while total infections in the country rose to 374,329, with the death toll reaching 12,064.

* U.S. President Donald Trump sharply criticized the World Health Organization on Tuesday, accusing it of being too focused on China and issuing bad advice during the outbreak and saying he would put a hold on U.S. funding for the agency.

* California’s Santa Clara County slowed the illness with early and aggressive shelter-at-home rules. The county of about 2 million people was initially on track to develop an estimated 50,000 cases by May 1. It now may have just 2,500 to 12,000.

* COVID-19 is killing African-Americans at a higher rate than the U.S. population at large, according to preliminary numbers from Louisiana, Michigan and Illinois that officials say point to disparities in health and healthcare access.

* The United States deported 61 Haitian migrants on Tuesday despite fears of further spreading the deadly disease in the poorest country in the Americas.

* Tesla Inc told employees it would furlough all non-essential workers and implement salary cuts during a shutdown of its U.S. production facilities because of the outbreak.

* Canada needs to do more to persuade Washington not to block medical supplies from flowing across the border, Prime Minister Justin Trudeau said.

* Uruguay said it has agreed to repatriate 112 Australians and New Zealanders from a cruise ship stranded in the La Plata River near Montevideo since March 27, with most of the 219 passengers infected by the coronavirus.

* Ecuador’s government is preparing an emergency burial ground on land donated by a private cemetery in Guayaquil, the country’s largest city, to address a shortage of burial plots. The country had 3,995 confirmed cases and 220 deaths.

* The Honduran central bank announced monetary policy measures that would inject some $465.5 million into the financial system, seeking to mitigate the virus’ economic impact.

ASIA AND THE PACIFIC

* The Chinese city of Wuhan ended a two-month lockdown, but a northern town started restricting the movement of its residents. New imported cases in the northern province of Heilongjiang surged to a daily high of 25, fuelled by a continued influx of infected travellers arriving from Russia.

* Mainland China reported 62 new cases, up from 32 a day earlier. The total number of confirmed cases stood at 81,802.

* Hong Kong said social-distancing restrictions, including the closure of some bars and pubs and a ban on public gatherings of more than four people, would be extended until April 23.

* India’s 21-day lockdown is set to end next week but several state leaders have called for an extension or only a partial lifting of restrictions.

* The Bank of Japan said it would scale back some operations such as long-term research and studies for academic papers following the government’s decision to declare a state of emergency. It will continue to release key economic indicators as usual.

* Australia’s chief medical officer said researchers were analysing data to help the government plot a recovery, after lockdown measures bought it some time.

* Philippines extended its lockdown and home quarantine measures until the end of April.

* Indonesia approved a request by the Jakarta administration to impose further large-scale social restrictions on the capital.

* India will allow limited exports of an anti-malaria drug that U.S. President Donald Trump has touted as a potential weapon in the fight against the virus.

* Japanese automaker Nissan said its sales in China fell 44.9% from a year earlier in March.

* Most Middle Eastern countries are seeing worrying daily increases in cases but the region still has a chance to contain its spread, a senior WHO official said.

* The coronavirus could eventually infect between 10,000 and 200,000 people in Saudi Arabia, the kingdom’s health minister said.

* Egypt will ban any public religious gatherings during the holy Muslim fasting month Ramadan starting in around two weeks.

* South Africa’s main health workers’ union planned to challenge the government in court on Tuesday over shortages of protective gear for frontline staff.

* Asian stocks were mixed on Wednesday after two sessions of sharp gains as investors tempered their optimism about the coronavirus while death tolls were still mounting across the globe. [MKTS/GLOB]

* British employers’ demand for staff plummeted in March, with job vacancies contracting for the first time in nearly 11 years, as the pandemic brought hiring activity to a halt.

* New Zealand business confidence fell sharply in April, with most key activity indicators hitting record lows amid fears over the economic damage from the pandemic.

* Euro zone finance ministers hope to agree on measures worth half a trillion euros to finance recovery from the coronavirus, a discussion that has sown divisions.

* The Trump administration asked Congress for an additional $250 billion in emergency economic aid for small U.S. businesses reeling from the pandemic.

* U.S. job openings fell in February, suggesting the labour market was losing momentum even before stringent measures to control the outbreak shuttered businesses.

* Latin American assets extended their recovery into a second session on Tuesday, as risk assets were propped up by hopes that the coronavirus outbreak had peaked in several hot spots.

* Slovenia will post a “high” budget deficit and public debt will increase this year, the Fiscal Council said on Tuesday.

* Portugal will boost its credit lines for struggling businesses to 4.2 billion euros on Wednesday, after it was bolstered by a state aid package from the European Commission.

* Japan will sell a record amount of extra bonds this fiscal year, worth more than $165 billion, straining the industrial world’s heaviest debt burden.

* Nearly 140 campaign groups and charities urged the IMF and World Bank, G20 governments and private creditors to help the world’s poorest countries through the crisis by cancelling debt payments.

* The IMF said it was considering Nigeria’s request for $3.4 billion in emergency financing to combat the impact of the pandemic.