Ex-members of Syrian military accused of torture were living in Germany as refugees until they were arrested and jailed. 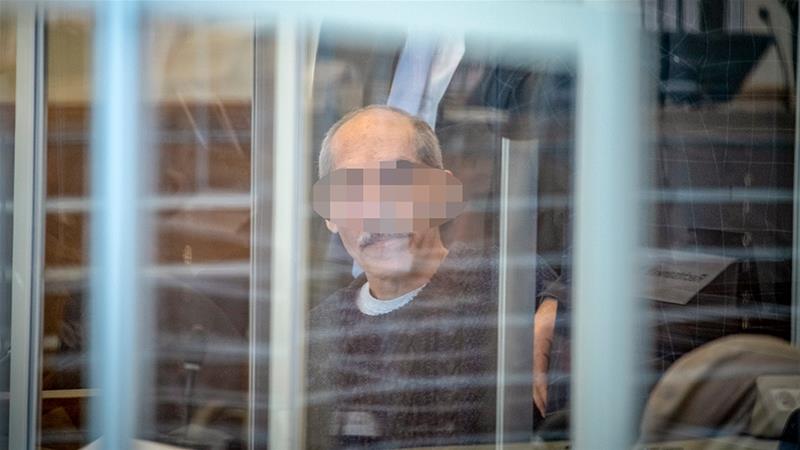 Koblenz, Germany – This week in Koblenz, a picturesque German town on the banks of the Rhine river, local prosecutors have been demonstrating how the world could try war criminals.

During the first few days of a landmark case focusing on crimes against humanity by members of the Syrian regime, the court heard details of years-long investigations.

Two Syrians – Anwar Raslan, a former colonel who defected from Syrian military intelligence, and Eyad al-Gharib, who allegedly worked for him – are being trialled for their complicity in the torture of around 4,000 people and the deaths of 58 others, among other crimes, in the Higher Regional Court in Koblenz, south-western Germany.

Both had lived as refugees in Germany but were arrested in February last year. They have been in prison since.

German prosecutors are using a legal principle called universal jurisdiction, which allows them to bring cases before German judges, regardless of whether the accused or their crimes have a close connection to Germany.

The first stage of the trial ended on Wednesday. The next stage resumes in Koblenz on May 18.

“This is a historic case and it is the first time that international crimes committed by government officials are trialled, while the same government is still in power,” Anna Oehmichen, a German lawyer appointed by the Open Society Justice Initiative to represent five witnesses in Koblenz, told Al Jazeera.

“But it is also a challenge to prove such a case in Germany because so much of it happened elsewhere.” 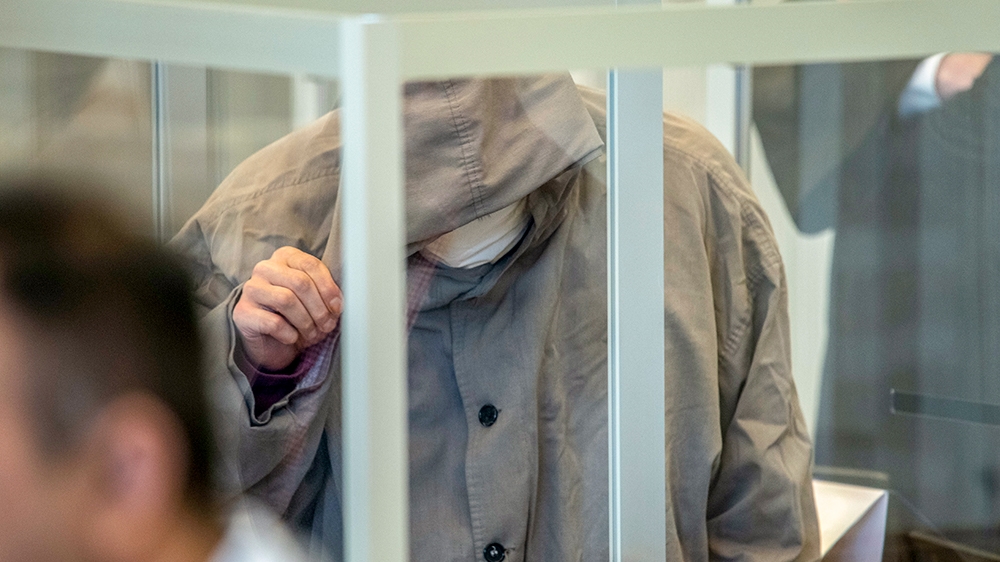 Media and the public packed the courtroom on April 23, the first day of the trial, including many Syrians who had travelled several hours to Koblenz.

“This is an historic day,” said a protester outside the court, holding up a sign calling for justice for Syria.

The following days were more concerned with bureaucratic detail.

Testimony was given by immigration authorities, a representative of the German Foreign Office and an officer from the German Federal Criminal Police, Germany’s equivalent to the FBI in the US.

The court is gathering this kind of technical information to come up with a detailed chronology, explained Patrick Kroker, a senior legal adviser with the European Center for Constitutional and Human Rights, or ECCHR, which is supporting nine witnesses in the case.

This is likely to continue for the next few months.

“After that, we will probably move to another phase where we have different kind of evidence being given,” he told Al Jazeera.

How Raslan came to Germany’s attention

The federal police officer – whose name is suppressed by German law for security reasons, led the investigation into Anwar Raslan.

He told the court how Raslan had first come to their attention: In October 2017, he made a complaint with local German police because he believed he was being followed by members of the Syrian secret service in Germany.

At the time, Raslan gave details about his job with military general intelligence in Syria, for whom he had worked for around 18 years.

Raslan said that before he defected, he had overseen investigations at Branch 251 of military intelligence in Damascus. Local police flagged this and passed the information to their federal counterparts.

In their indictment against him, German prosecutors now allege Raslan supervised “the use of systematic and brutal torture” at Branch 251 between April 2011 and September 2012.

But, as the federal police investigator said, the German war crimes unit had been collecting evidence from Syria long before this, since around the beginning of the Syrian revolution in 2011. 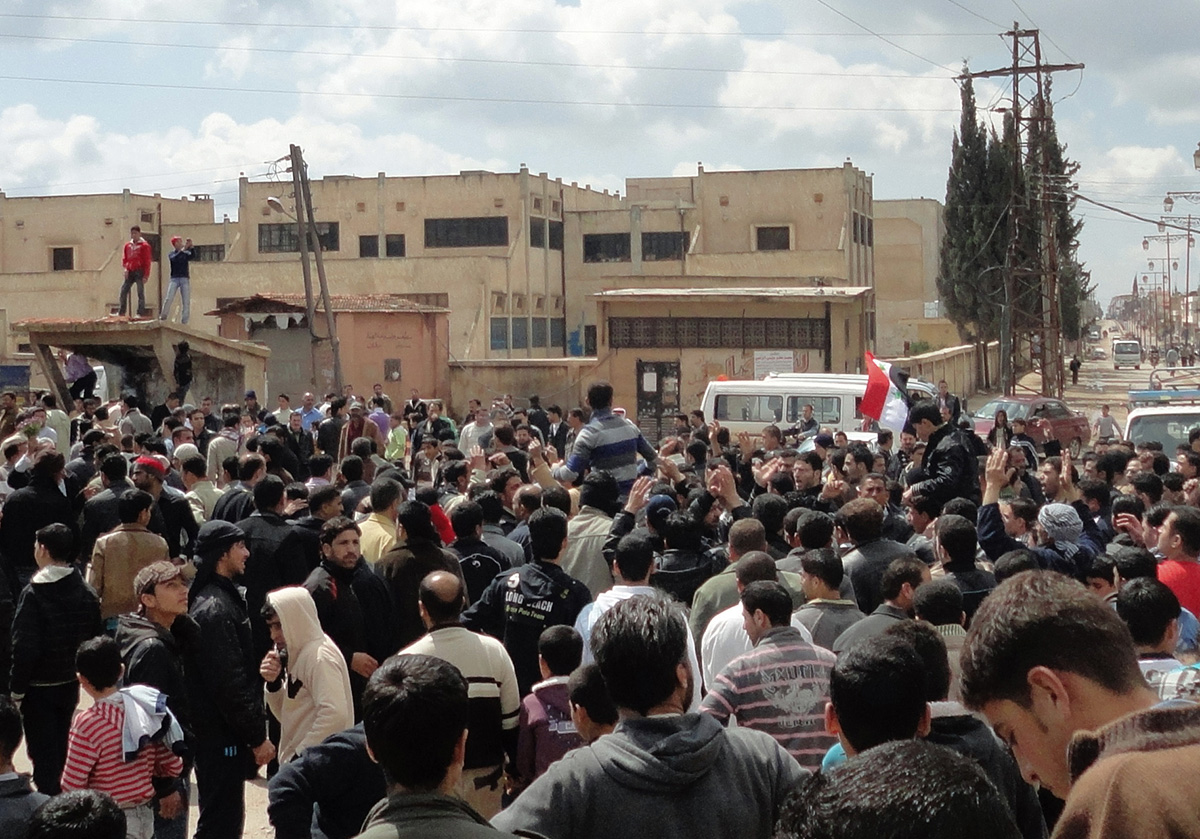 They suspected war crimes were being committed back then, and their background investigation already held some information on Raslan.

As they were interviewed during their asylum applications, German immigration authorities often asked Syrian refugees whether they had witnessed, been victims of, or committed any war crimes.

Raslan’s name and that of Branch 251 had come up in interviews with a number of Syrian asylum seekers, the police officer said.

“We saw this [the immigration interviews] as a very, very significant source,” he told the court.

Syrian activists and lawyers in Germany, who knew Raslan was in the country, also gave statements about the ex-colonel to the German authorities, with the ECCHR’s help. They were somewhat surprised to find that federal investigators were already looking into his case.

German investigators also sourced information from elsewhere on an ongoing basis, the investigator explained, including from human rights organisations, the United Nations, media reports, Syrian community groups and also from the Commission for International Justice and Accountability, or CIJA.

CIJA, an NGO, collected documentary evidence from inside Syria and was able to give the German investigators three documents from 2012 with Raslan’s signature on them.

Some of the so-called Caesar files – thousands of photographs of corpses of tortured detainees in Syrian regime jails, taken by a police photographer, known only as Caesar – were also used as evidence.

The German investigators sent the pictures to forensic medicine specialists in Cologne to be professionally assessed. The results of that work could eventually also be used in other countries’ courts. 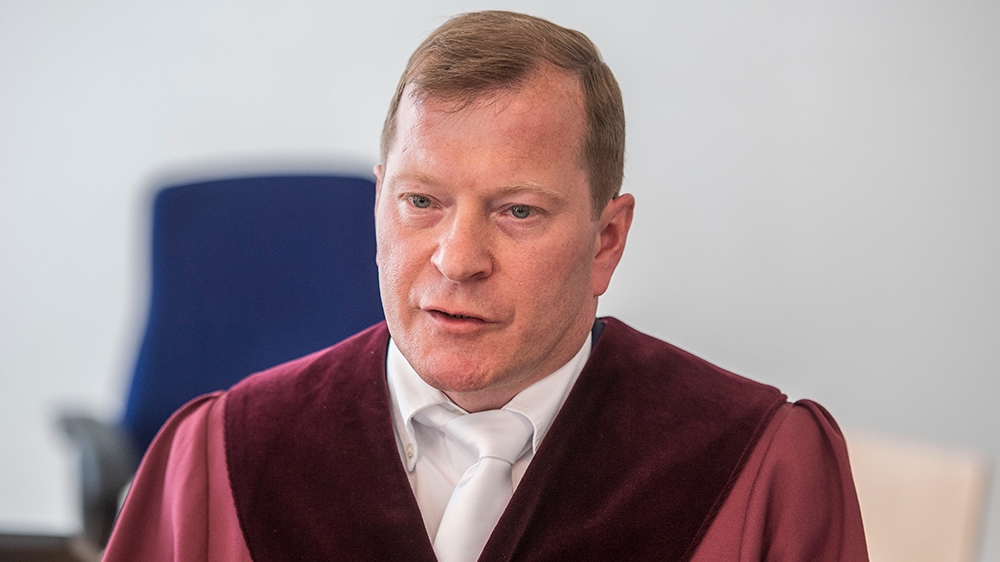 Prosecutors are using “novel investigatory strategies” in this trial, explained Kroker, who, in his role as an independent lawyer, is also representing seven joint plaintiffs in the case.

“Background investigations enable prosecutors to move on these kinds of trials more quickly. And this case also shows the necessity and utility of international cooperation, especially within the European Union.”

As the Germans began looking for Syrian witnesses – particularly those who had been held at Branch 251 – they regularly contacted other war crimes investigators around Europe. They ended up with witnesses in Germany, Norway, Sweden and France.

“Every statement we took would lead to another witness statement,” the police investigator told the court; interviewers would always ask the Syrians if they knew anybody else who had been held at Branch 251.

“At some stage, we decided we had to finish. We took about 70 statements that fit into the time period.”

The investigation also included more standard police methods – such as a photographic line-up where victims were asked to identify Raslan, a month-long wiretap and a search of Raslan’s home and electronic devices.

“That didn’t yield much,” the policeman conceded. “But we did find a notebook that had the telephone numbers of high-ranking Syrian regime members in it, a copy of his military ID and a CV in English,” he recounted.

The German federal prosecutors’ goal is to place Raslan, and his aide, at Branch 251 over the aforementioned 17 months.

As yet, it remains unclear what the defence’s strategy might be.

Raslan and al-Gharib willingly gave details of the work they did in Syria to immigration authorities and German police.

The defence asked the federal police officer: Were they, and other asylum seekers, warned that this information could potentially be used against them?

He did not have an answer.

Additionally, German immigration authorities are not supposed to grant asylum to anybody suspected of war crimes.

It also became clear that, thanks to his military seniority at the time of his defection, Raslan was considered an important asset to the Syrian opposition in Europe.

Because of that, he may have been advantaged in getting a German visa for himself and his family in 2014.

A leading Syrian dissident, Riad Seif, vouched for him and Raslan was part of a wider Syrian circle that attended peace negotiations in Geneva in early 2014, a representative from the German Federal Foreign Office told the court.

Raslan did not appear to have been questioned by immigration authorities, the police investigator said.

He also admitted that some of the witnesses, whose statements were used to build the case against Raslan and al-Gharib, were also ex-Syrian military. No charges have been brought against them.

Lawyers representing the Syrians in the case have already said that, in strictly legal terms, none of those things should make a difference as to whether Raslan and al-Gharib are personally found guilty or not. But their defections and honesty could be taken into account during sentencing if they are.

But that is some time away – the trial is expected to take up to two years, possibly longer. 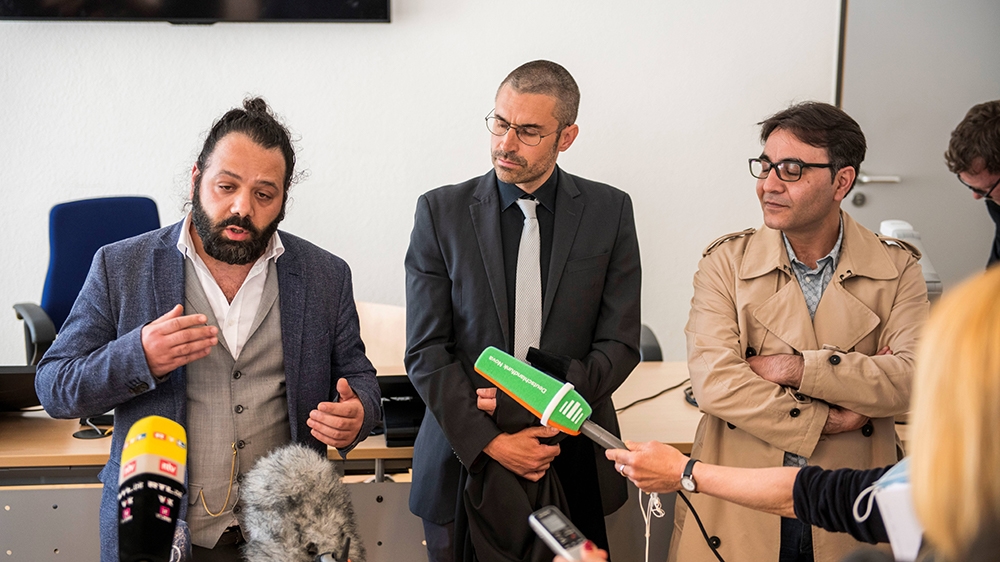 Because of the German legal “principle of orality”, which requires oral evidence to be given before the judges, documents such as visa applications and letters about social welfare benefits all had to be read out, in order to be admitted into evidence.

Perhaps in some ways, such dogged bureaucratic mundanity is welcome.

“I’ve heard about fair trials but this is the first time I have experienced one,” said Hussein Ghurair, a Syrian journalist and one of the joint plaintiffs.

“It’s such a fair trial that the judge even made sure to ask whether the defendants could hear her properly. And whether they’d had enough time to communicate with their lawyers.

“When we were being interrogated, we were blindfolded and handcuffed. We were powerless. Now, we want the truth to be told, we want to reveal what is still happening to our friends in Syria today and we want that to be told through a fair trial.”