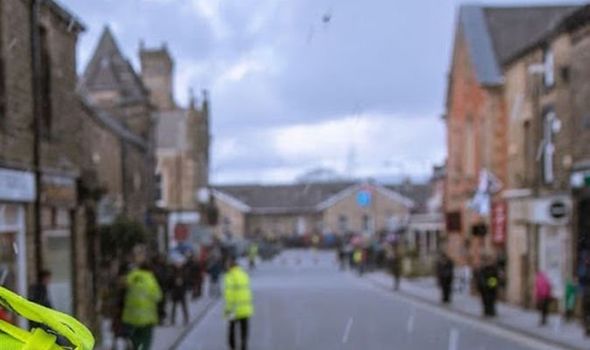 Residents in Skelmersdale reported a tornado swept through the town, causing serious damage to properties and the ground. Lancashire and Greater Manchester fire crews were scrambled to tackle damage from the gusts. Police have confirmed the areas affected by the dangerous weather occurrence are predominantly Eskbank, Tanhouse and Grimshaw Road.

Both fire crews arrived at the scene where the tornado had caused damage at 12.09pm.

Several properties were damaged due to the extreme weather and required three fire engines to be deployed.

A spokesperson for Lancashire Fire and Rescue said: “At 12:09 on 29th October, three fire engines from Skelmersdale and Ormskirk attended a dangerous structure incident on Eskbank, Skelmersdale.

“One support pump from Greater Manchester Fire and Rescue Service also attended. The incident involved several domestic properties that were damaged due to inclement weather.

“Firefighters worked to make the scene safe. They currently remain in attendance.”

Lancashire Constabulary issued a statement about the extreme weather event.

They said: “West Lancashire isn’t known for its extreme weather, but just before midday today, a tornado (confirmed by residents) has travelled through the area causing a significant amount of damage to properties within Skelmersdale.

“Thankfully there are currently no reports of injuries, but there is some damage to roofing and on the floor due to this.

“The community have been fantastic confirming neighbours safety and welfare, and emergency services have been quick to respond.

“A special thanks to the LFRS who are currently on-site ensuring building safety removing loose tiles, along with WLBC who have immediately deployed the Clean and Green Teams and emergency housing officers to conduct property surveys and ensure any family displacement is taken care of.

“If anybody needs support, or if you are concerned about anybody, please call or make yourself know to officers on site.

“A great community spirit and great partnership working. Thanks to everyone involved.”

James Mangan, living on Fullwood Drive, Aigburth, told the Liverpool Echo: “I was in the kitchen and heard loads of noise outside over my music so muted it and opened the window.

“[I] just saw proper madness outside in the garden stuff flying around and that.”

A spokesperson for Merseyrail said: “Due to a fallen tree at St Michaels, services on the Hunts Cross Line will start and terminate at Liverpool central.”

The harsh winds are expected to continue into the weekend, after days of heavy rain.

Marco Petagna, Media Advisor at the Met Office, told Express.co.uk: “Saturday will see further rain at first, giving way to sunshine and showers, with a spell of more persistent rain and potentially gale force winds sweeping northeast across all parts into Sunday.

“A mix of sunshine and showers will return next week, and with the wind swinging more into a north or northwesterly direction, temperatures are likely to drop to around average or just below.”

In September, two tornados struck Humberston, Lincolnshire, with in excess of 20 houses thought to have been damaged.

Speaking to BBC Radio Humberside, reporter Lara King suggested there had in fact been two mini-tornadoes in the area.

She said: “It’s unbelievable to be honest, there’s a big motorhome on its side.

“This is a quiet residential street in Humberston.

“Thank goodness people weren’t in their gardens because they could have been really badly hurt.”