Joe Biden says ‘give me a break man’

Joe Biden took over the presidency from Donald Trump yesterday, promising a hopeful new era for the US political landscape. He pledged to mend some of the fractures in American politics and unify his country. His intentions became immediately clear yesterday evening when he sat behind the Oval Office Resolute Desk and signed a pile of executive orders.

What is an executive order?

Executive orders are one of the many unilateral powers afforded to the US President.

From the Oval Office, they can use them to usher in immediate changes to federal law.

The orders are a “signed, written and published directive” according to the American Bar Association (ABA). 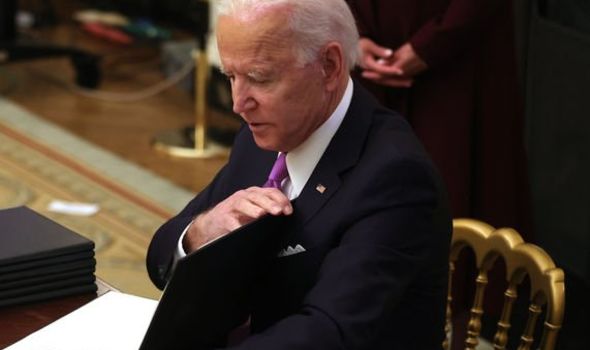 A signed order changes policy on a federal level without input from the country’s elected legislators.

Several examples of executive orders include the controversial “Muslim ban” and “border security enforcements” along the US-Mexico border which directed funding to Mr Trump’s infamous wall.

The ABA explained executive orders require no Congressional involvement, meaning the President has authority to issue these without opposition.

They said: “Executive orders are not legislation; they require no approval from Congress, and Congress cannot simply overturn them.”

They added Congress can make them near useless, but the only person who can change them is the Commander in Chief.

The association added: “Congress may pass legislation that might make it difficult, or even impossible, to carry out the order, such as removing funding.

Mr Biden has done just that, using his first day to wipe out many of his predecessor’s most controversial acts.

Just hours following his inauguration, he tweeted his intention to get to work as soon as possible.

He wrote: “There is no time to waste when it comes to tackling the crises we face.

“That’s why today, I am heading to the Oval Office to get right to work delivering bold action and immediate relief for American families.”

Mr Biden took to the Resolute Desk yesterday – where Presidents sign laws, receive guests and addresses the nation – next to a pile of orders to kick off his first term.

He signed a total of 15 executive orders which will have a near-immediate impact on US citizens and their neighbours.

Among the orders was one declaring renewed membership with the Paris Climate Agreement, which Mr Trump exited mere months ago.

He has also ordered a series of measures to tackle the coronavirus crisis, including renewing the American relationship with the World Health Organisation (WHO).