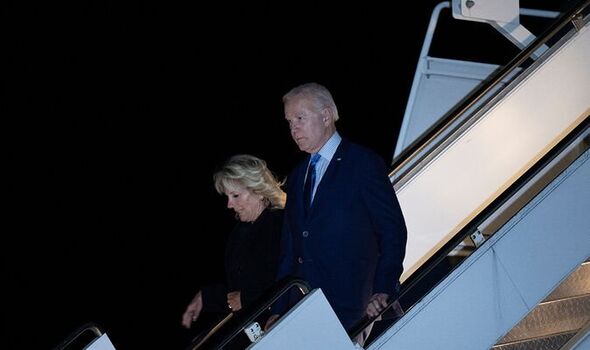 US president Joe Biden has arrived in the UK for his visit to attend the Queen’s funeral. The pair were greeted by a small party, including Jane Hartley, US ambassador to the UK, and Jennifer Tolhurst, the Lord Lieutenant of Essex as they stepped off the plane at Stansted Airport ahead of the late monarch’s funeral on Monday.

Earlier this week, the White House said the royal invitation to the funeral, which takes place on Monday at Westminster Abbey, was for the Bidens only.

The Queen died on September 8 after a 70-year reign, sparking a grief and mourning across the UK and the world.

She had met multiple US presidents, including, in more recent years, Donald Trump, Barack Obama and George W Bush.

She met 13 of the last 14 American presidents, all except Lyndon Johnson and starting with Harry Truman in 1951 when she was still a princess.

The Bidens, who joined the Qeen for tea in June 2021, are scheduled to pay respects to the late sovereign, whose coffin is lying in Westminster Hall on Sunday.

Afterwards they will sign an official condolence book before attending a reception hosted by King Charles III.

The state funeral on Monday is to be attended by nearly 100 presidents and heads of government.

Mr Biden, 79, has said the Queen reminded him of his mother.

The president is deeply familiar with grief, having lost his adult son to cancer in 2015 and his wife and young daughter to a car accident decades ago.

The president and his wife will return to Washington on Monday after the funeral.

It comes after the US leader’s meeting with Prime Minister Liz Truss, due to take place on Sunday, was cancelled.

The leaders will instead attend a “full bilateral meeting” at the UN General Assembly on Wednesday, No 10 said.

Downing Street would not provide further details on why the meeting with Mr Biden had been cancelled.

This weekend’s talks are being framed by No 10 as chats, rather than formal bilateral sessions, with politics likely to feature