ABU DHABI (Reuters) – Senior U.S. and Israeli officials landed in the United Arab Emirates on Monday on a historic trip to finalise a pact marking open relations between Israel and the Gulf state, and they told Palestinians it was now time for them to negotiate peace.

Announced on Aug. 13, the normalisation deal is the first such accommodation between an Arab country and Israel in more than 20 years and was forged largely through shared fears of Iran.

Palestinians were dismayed by the UAE’s move, seeing it as a betrayal that would weaken a long-standing pan-Arab position which calls for Israeli withdrawal from occupied territory and acceptance of Palestinian statehood in return for normal relations with Arab countries.

Kushner said Palestinians should not be “stuck in the past”.

Israel and the United Arab Emirates will discuss economic, scientific, trade and cultural cooperation on the visit. Direct flights between the two countries will also be on the agenda, an Israeli Foreign Ministry spokesman told al Arabiya television after landing in Abu Dhabi.

“That’s what peace for peace looks like,” Israeli Prime Minister Benjamin Netanyahu tweeted, describing a deal for formal ties with an Arab state that does not entail handover of land that Israel captured in the 1967 Middle East war.

At a news conference in Jerusalem late on Monday, Netanyahu said: “It will be a warm peace because it will be based on cooperation in the realm of economics, with an entrepreneurial economy like ours, with vast economic capabilities, with big money looking for investment channels.”

Even before landing, the delegates made aviation history when the Israeli commercial airliner flew over Saudi territory on the direct flight from Tel Aviv to the UAE capital.

Israeli officials hope the two-day trip will produce a date for a signing ceremony in Washington, perhaps as early as September, between Netanyahu and Abu Dhabi’s Crown Prince Sheikh Mohammed bin Zayed al-Nahyan.

That could give U.S. President Donald Trump a foreign policy boost ahead of his re-election bid in November. 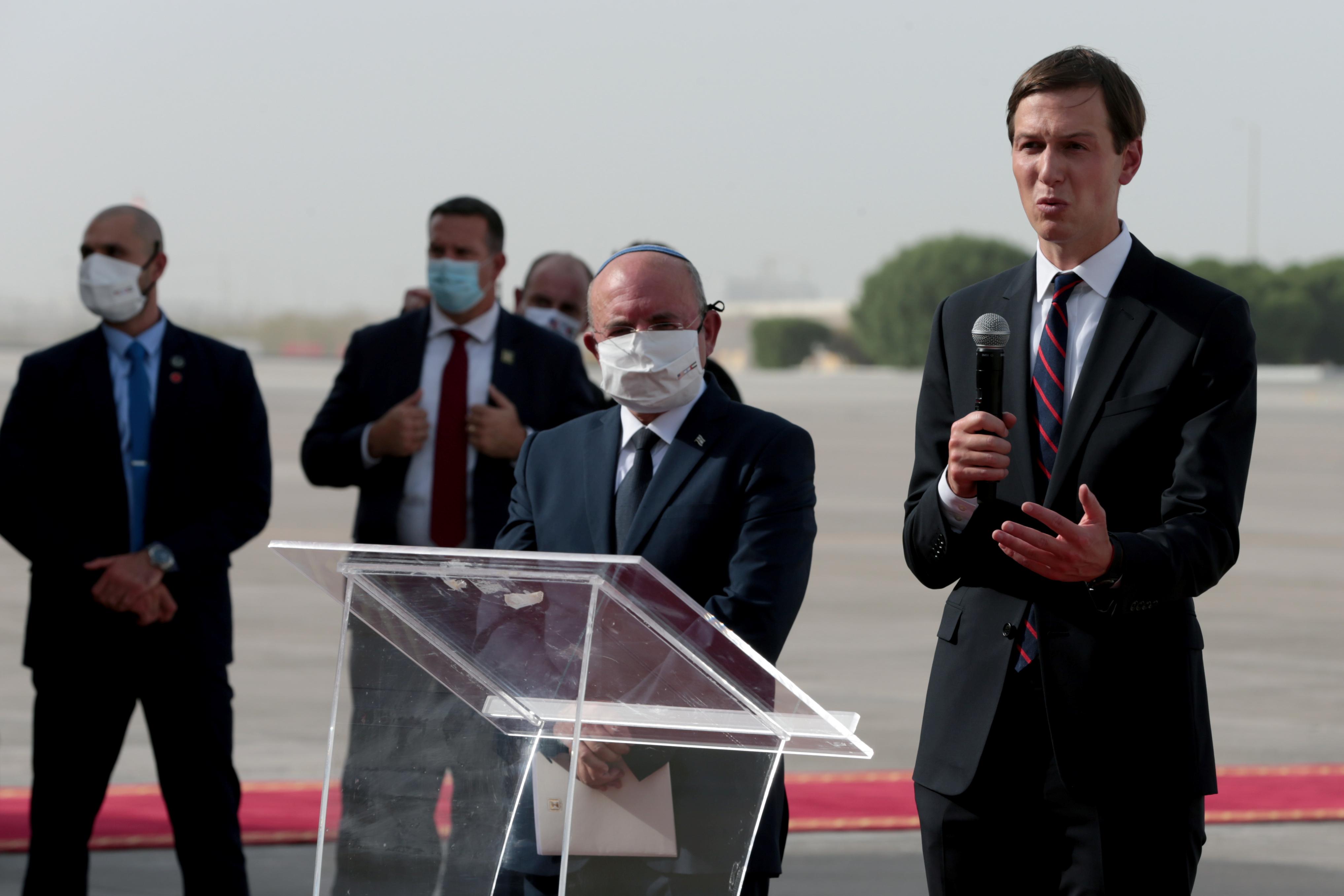 The Trump administration has tried to coax other Sunni Arab countries concerned about Iran to engage with Israel. The most powerful of those, Saudi Arabia, while opening its airspace to the El Al flight, has signalled it is not ready.

On board the packed airliner, passengers were welcomed in Arabic as well as English and Hebrew, a gesture marking the historic flight.

“Wishing us all salaam, peace and shalom, have a safe flight,” the pilot, Captain Tal Becker, said on the intercom, in Arabic, English and Hebrew, using all three languages to also announce the flight number and destination.

Like all El Al 737s, the aircraft was equipped with an anti-missile system, an Israeli spokesman said, and carried security agents of the U.S. Secret Service and the Israeli Shin Bet.

Palestinian leaders expressed anger at a deal which they believe further erodes their struggle for an independent state.

“Peace is not an empty word used to normalize crimes and oppression. Peace is the outcome of justice,” politician Saeb Erekat said in a Tweet.

“Peace is not made by denying Palestine’s right to exist and imposing an apartheid regime. Apartheid is what Netanyahu means by “peace for peace.”

The Islamist Hamas group, which controls the Palestinian enclave of Gaza, also condemned the UAE. 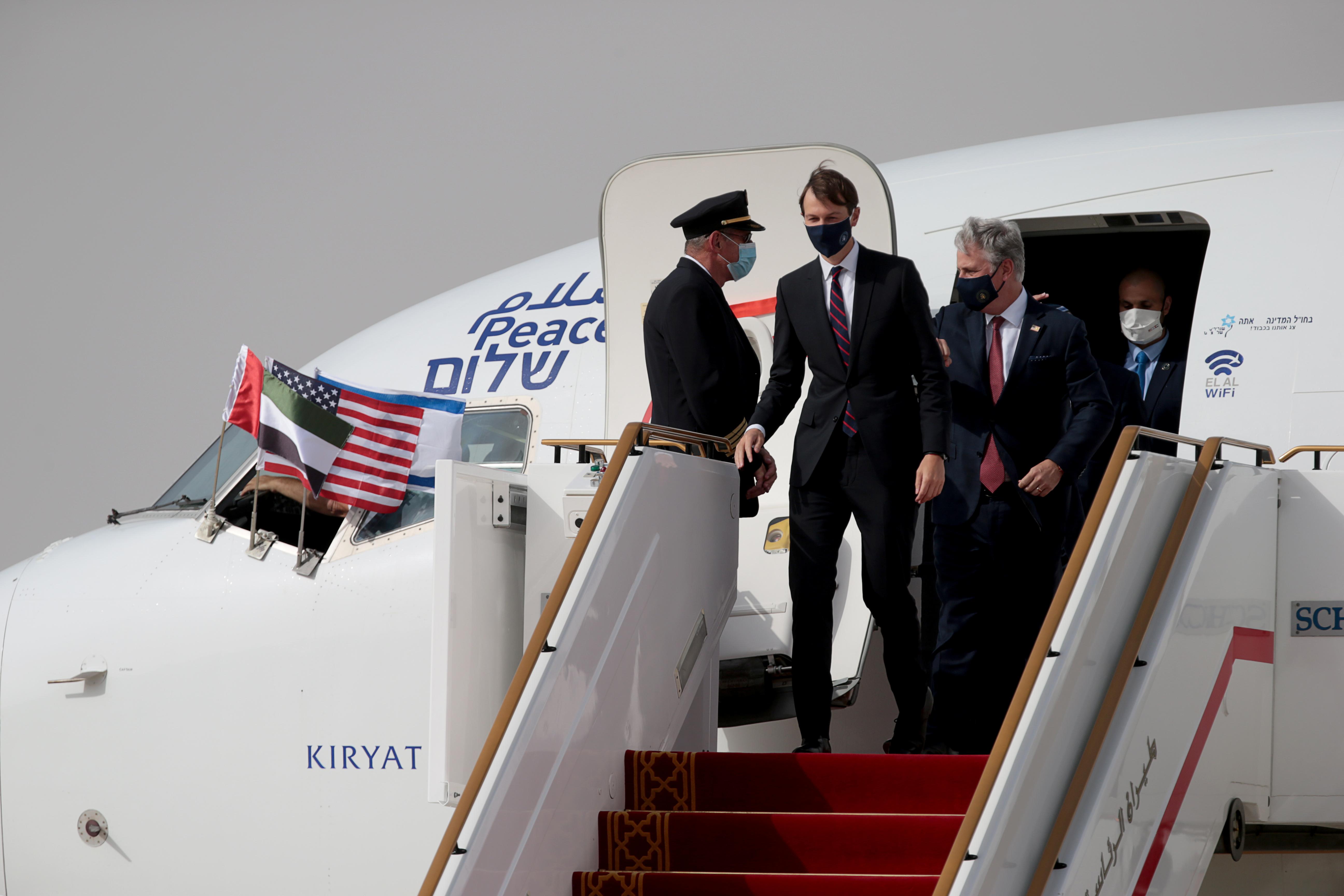 The flight represents a “stab in the back of the Palestinian people, a prolonging of the occupation, and a betrayal of the resistance of the (Palestinian) people,” Hamas said in a statement.

Hours before the plane landed, in apparently unrelated incidents that authorities attributed to gas malfunctions, three people were killed and several others were injured in two separate explosions in Abu Dhabi and UAE tourism hub Dubai, police and local media said.

The Abu Dhabi government media office said two people were killed in the blast in the capital, which the National daily reported hit KFC and Hardee’s restaurants, located on a main road leading to the airport.

In the second incident, one person was killed when a gas cylinder exploded in a Dubai restaurant, local media reported.