Russians say infection could spread quickly as authorities are slow to act, while the rich allegedly hoard ventilators. 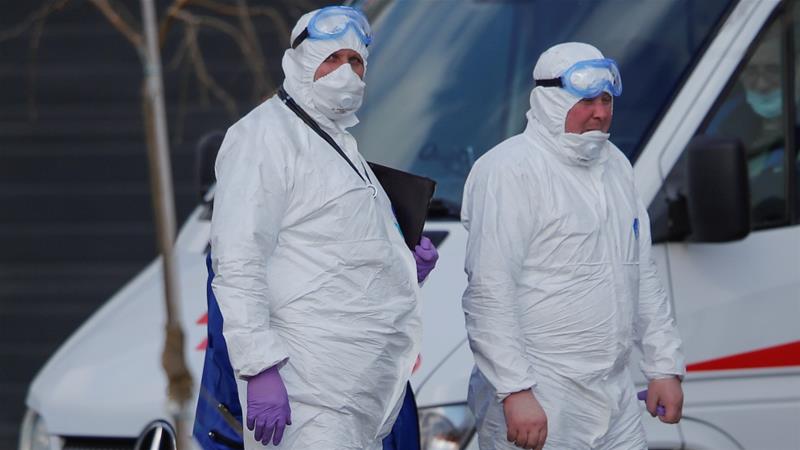 The jovial mother of two understands that at 45, she is not among the people most at risk of the infection.

But still, she is torn between “panic and carelessness”, after witnessing what she describes as a slow response by authorities to the danger.

“In Moscow, authorities are pretending to be getting ready, but nothing has changed so far, except for the shelves in the shops. People are sweeping everything off the shelves,” she told Al Jazeera.

Only one Russian, a 79-year-old woman in Moscow, has died of pneumonia caused by the novel coronavirus, and 438 people have been diagnosed with the infection as of Monday, including 71 in the past 24 hours, officials say.

Russia’s numbers are far fewer than the hundreds of deaths reported daily in Italy, where at least 5,476 have died, and in France, where there are some 16,000 confirmed cases.

Just over 150,000 people have been tested for COVID-19, so far in Russia, a nation of 143 million that stretches across nine time zones and borders 14 nations, including Norway and China, where the virus originated.

That gives Russia one of the world’s lowest ratios.

There is only one lab in Russia capable of conducting coronavirus tests. It uses equipment produced in the western Siberian city of Novosibirsk.

“The virus was confirmed in my third test, it was not seen in my blood but was in my saliva,” David Berov wrote on Instagram on March 5. “As I was told, they could barely see it, so that’s why they were in doubt for so long.”

The low number of detected infections has prompted some critics to claim that that the Kremlin is hiding the real number.

The number of pneumonia cases that can potentially be caused by coronavirus increased by 37 percent in Moscow year-on-year in January, according to Rosstat, Russia’s state-run statistics agency.

Its data shows that Moscow recorded 6,921 pneumonia cases in January, up from 5,058 the previous year. Nationwide, pneumonia cases also grew by over three percent year-on-year.

Until Thursday, Russians arriving from abroad, including pandemic-struck nations, were not isolated.

Fiction writer Svetlana Volkova, a resident of St Petersburg, Russia’s second-largest city, said that her friends returned from Austria, which borders Italy and where authorities have reported more than 3,000 cases and six deaths.

The travellers had their temperature taken at the airport and were instructed to self-isolate.

“They nodded their heads and took the metro home,” Volkova told Al Jazeera. “No one stopped them.”

She believes Russians may contribute to the epidemic.

“Having been told not to leave their homes, [Europeans] don’t. Try to keep Russians under control like that,” she said.

Another observer said that Russians belatedly realised the perils of the pandemic.

“But now, we understand that Italians and Germans had the same attitude” before authorities imposed restrictions, he said.

Russia is closing its borders on Wednesday. It has already banned outdoor festivities and public gatherings, shut down schools and gyms, closed access to attractions such as the Red Square mausoleum of Soviet founder Vladimir Lenin.

The Kremlin has stopped short of cancelling the April 22 nationwide referendum on constitutional amendments that include the “nullification” of President Vladimir Putin’s presidential terms that will allow him to stay in power until 2036.

But Putin’s spokesman Dmitry Peskov has said of the vote: “The health of the country’s citizens is most important … If the growth of the epidemiological situation gives cause to reschedule, then it will be done.”

Putin said in televised remarks on March 18: “Thank God, we have things under control in general. I hope it will go on like this in the future.”

After the 2014 annexation of Crimea and widely publicised, expensive infrastructure projects such a bridge linking the Black Sea peninsula to mainland Russia, the healthcare system underwent significant budget and personnel cuts.

The effect was immediate.

“There were four ambulances in our district, and now we have only one,” Tatyana Korotkykh, a 57-year-old living in a village outside the Urals Mountains city of Chelyabinsk, told Al Jazeera.

“My brother died of a heart attack last year, because this single ambulance was reviving [someone else] and got to him four hours after he called.”

Another factor that may contribute to the spread of the virus is technological.

Only 42 percent of Russian companies can allow their employees to work from home, according to a poll by Bitrix24, a business consultancy.

Survival of the richest?

Meanwhile, many Russians are preoccupied with purely economic problems.

Russia’s recent oil price war with Saudi Arabia sent hydrocarbon prices down along with the ruble, and the temporary shutdown of businesses prompts fears of financial losses.

“Everything is falling apart. We may sink lower than in 2008,” when a global economic crisis hit Russian business hard, Stanislav, a wholesale alcohol distributor, told Al Jazeera.

And just as in the West, where, unlike most people, the rich can afford coronavirus tests and have been buying up private plane tickets as they head to remote areas, wealthy Russian are focused on their health and self-isolation.

They rush to set up private clinics in their suburban mansions and hoard ventilators that help coronavirus victims breathe, depriving average Russians of access to the life-saving equipment, The Moscow Times reported on Saturday.

“Our oligarchs never invested in local hospitals because they never thought they would have to be treated there,” cardiologist Yaroslav Ashikhmin was quoted as saying. “Now, they might experience the hell that they helped create.”