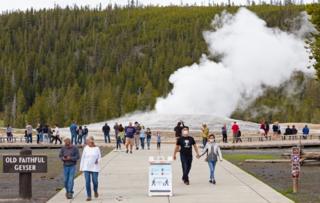 National parks are re-opening across the US, and people are overjoyed. After weeks of staying at home, they are desperate to go outdoors. But is it safe?

Judah Brass, 19, has been hunkered down in Knoxville, Tennessee, with his parents and brothers and sisters for weeks. But a few days ago, they went for a hike in the Great Smoky Mountains in a park near their house.

“Standing in the breeze, I was just so thankful,” he says, describing what it was like to see spring flowers and hear the croaking of frogs. “It was freeing.”

He was one of the first to visit the Great Smoky Mountains park after it had re-opened.

The park, along with Yellowstone National Park and many of the other national parks, had been shut because of the pandemic. Park officials were concerned about the virus, and they closed off access to many of the national parks in March.

The parks are the country’s treasures, showcasing beauty that ranges from the Florida Everglades to California’s giant sequoias. With such impressive offerings, the parks attract crowds – last year, more than 4m people visited Yellowstone alone. But the Great Smoky Mountains, which has also reopened, is the busiest – a million visitors each month.

It means people who have been cooped up for weeks can now head for the parks and enjoy the outdoors.

The president celebrated the opening of the parks in a speech last month, saying that it showed the US had made progress in its effort to fight the virus.

“People are going to be very happy,” he said.

He’s right – hikers and others are thrilled at the prospect of returning to the great outdoors.

They know that spending time outdoors is good for one’s mental, emotional and physical well-being. Science also shows that it helps people at work and allows them to find new ways to solve problems.

Shelley Carson, a psychology professor at Harvard University, explains: “Being surrounded by natural beauty helps our ability to be creative.”

But still hikers and nature lovers, even the most avid among them, are concerned about risks. They are worried about crowds at the park. They wonder if social-distancing guidelines will be followed, and they are not sure if it is safe to be in a place with so many people.

Jon Waterman, a former park ranger and the author of a book entitled Atlas of the National Parks, clearly loves the parks. Still he thinks that this may not be the best time to visit them.

“It will be difficult if not impossible to enforce social distancing rules,” he says. “Anyone thinking they can safely visit Yellowstone is not thinking clearly. Those crowded national parks are simply not going to be safe.”

The re-opening of the parks comes at a key moment for the nation and its fight against the pandemic. Nearly 100,000 people have died of the virus, and the health guidelines for preventing infection remain in place – people are told to wash their hands frequently, practise social distancing and wear masks in public.

Still the country is now opening up. State officials across the US have modified their stay-at-home orders, allowing people to venture out and resume some of their activities. For many, that means a visit to the park.

Officials have tried to minimise the danger. They are opening the parks in phases in order to limit the number of people who will visit at the same time. And visitor centres are locked.

A spokeswoman for the National Park Service told the BBC people should follow the White House health guidelines when they visit all of the parks and should keep their distance from others: “Give others plenty of room whether you are on a trail, at a boat launch or in a parking lot.”

People have been rushing to the parks, though, making it hard to avoid the crowds.

Meanwhile visitors to the other parks have flaunting the health guidelines. This week at Yellowstone, reports the Guardian, people were not wearing masks.

Not all of the visitors to the parks have been cavalier.

Before Judah Brass and other members of his family headed out to the Great Smoky Mountains, they packed masks and hand sanitiser “just in case”, he says. They visited during the week, and the place was not crowded.

Public health experts believe the benefits of opening up the national parks outweigh the risks, so long as visitors take precautions in the way the Brass family did.

Bring masks and hand sanitiser, says Joseph Allen of the Harvard TH Chan School of Public Health. If you are near others, you should wear your mask, he says, even when you are in a forest. (If you find yourself separate from others on a wooded path, he says “it’s OK to put your mask down”.)

For Judah Brass, the benefits are clear so the precautions are worth the effort.

“This big, beautiful view,” he says, recalling what he saw, “and the field in front of the mountains. It was just gorgeous.”