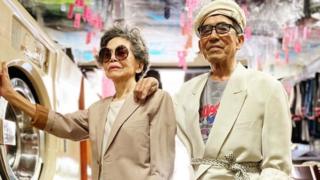 “I never would’ve thought at my age so many people would want to look at pictures of me,” says 84-year-old Hsu Hsiu-e.

She smiles proudly, standing in her laundrette with washed and ironed laundry hanging from overhead poles or stuffed inside glass cabinets all around her.

For 70 years, she and her husband, Chang Wan-ji, 83, have been quietly washing the clothes of the people in Houli District, Taichung City, in central Taiwan.

Over the decades, hundreds of pieces of clothing have piled up that customers had neglected to pick up.

Recently their grandson, Reef Chang, convinced them to have fun by modelling the abandoned clothes and posting the pictures on Instagram.

And to their surprise, their posts have become a big hit – so far their WantShowAsYoung account has 130,000 followers from around the world.

But Reef Chang says he wasn’t aiming to make his grandparents famous, he simply wanted to help them fight boredom as they grew old in Houli, a sleepy district of around 50,000 people.

“Their business is not always busy. They would doze off in the shop and their spirits weren’t high. So I thought since our family has these clothes, I can remind people to pick up their clothes, and remind my grandparents their life can still be great even in old age,” he told the BBC.

So with advice from friends with good fashion sense, he helped his grandparents mix and match shirts, shorts, blouses, and skirts, accessorising with borrowed purses, hats and sunglasses.

He then took fashion magazine-worthy pictures of them posing in front of the washers and and dryers in their old shop.

The looks created – grandpa in shorts and shirts that make him look like he was going to Havana, Cuba for holiday, and grandma in blouses and skirts that accentuated her slim figure – surprised the elderly couple.

The two strike poses that ooze style and chic – even in their ’80s.

“Dressed like that, I feel 30 years younger,” said Wan-ji, beaming.

Hsiu-e’s favourite outfit is the one of her wearing a plaid skirt from her closet and blouse left behind by a customer and a hat. “I like the way I look in that outfit,” she said.

Wan-ji, who started the dry cleaner at the age of 14 to help support his family, says people began leaving behind unwanted laundry in recent years when clothes became more affordable.

“In the past, clothes were very expensive,” Wan-ji recalled. “When I got married, it cost an ox-cart loaded with 20 bags of rice to pay for my suit. And back then clothes were so valuable that you could take them to the pawn shop if you needed money.”

Wan-ji says some people left clothes behind because they were from out of town and forgot to pick them up when they moved. Others passed away and their families didn’t care about the laundry. Others had major changes in their lives, including a divorce, that made them forget to pick up their clothes.

The couple have donated hundreds of items of clothing to charities, especially after natural disasters, but they are still left with a few hundred.

They initially felt awkward putting on customers’ clothes – a no no in their line of business – but their grandson convinced them to reinterpret fashion, let everyone know that age is not a barrier to having fun with clothing, and that even old clothes can be transformed into trendy outfits.

“They didn’t understand at first,” said Reef. “They also don’t understand fashion trends, but when they were young they were very fashionable. They thought why would people of this generation like clothes from their generation?”

Never having had an Instagram or Facebook account, and previously confusing “followers” with stalkers, they now happily listen to their grandson’s translations of people’s reactions to their posts.

“You two are sooo cute, keep stylin'” wrote a woman from London on Instagram.

“Wan-ji and Hsiu-e’s love make me think it’s not so scary to grow old,” another fan wrote.

What makes the couple happiest is inspiring others to think that age is no obstacle to looking trendy and having fun.

“Many people are not really old, it’s just their heart is old. They say they don’t have any energy and they rest and rest till their health declines,” said Hsiu-e.

Neither she nor her husband plan to retire.

Wan-ji is instead thinking about what to do with the many suits left behind.

For Reef, his reward is not only seeing his grandparents happier, but inadvertently reminding people to spend more time with their elderly loved ones.

“What really touched me is many people typed really long messages to me saying it reminded them that they haven’t spent much time with their grandparents,” said Reef.

“I feel when I was young, they gave all their time for me. Now that they’re so old, I don’t know how much more time I will have to spend time with them.”

“They’re very happy now; they’ve never been recognised like this,” he says.

But what about all the unwanted laundry?

Someone who saw their posts recently did just that, while bringing in more laundry.