What’s in the $1 trillion proposal, from broadband and bridges to ports and pedestrian crossings. 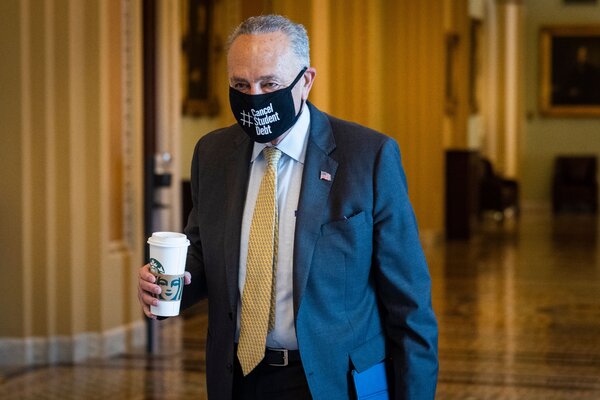 The $1 trillion infrastructure bill, in short

The bipartisan infrastructure plan, drafted during a marathon weekend session in the Senate, may go to a vote in the chamber this week. It is just over 2,700 pages long, with allocations for everything from broadband and bridges to ports and pedestrian crossings, plus proposals for how to pay for it all.

You can read the entire bill here (before amendments), or get the gist from our handy top-line summary and links:

About $110 billion will go on roads, bridges and transportation programs. Pedestrian commuting, projects that reduce collisions between cars and wildlife, and a federal program intended to encourage children to walk or bike to school all get funding. But it adds up to a small fraction of what’s needed to address a $786 billion backlog of repairs for roads and bridges alone, according to the American Society of Civil Engineers.

There’s $73 billion for a clean-energy makeover of the electric grid. That is much less than what President Biden sought for projects like electric-vehicle charging stations and green public transport. There are also billions of dollars for climate resilience programs, such as flood control, and funding for investment in new technologies, including carbon capture.

Amtrak gets $66 billion and a new mandate. The bill will address rail’s significant repair backlog. Also, Amtrak’s mission would change to “meet the intercity passenger rail needs of the United States” rather than achieving “a performance level sufficient to justify expending public money.” That implies that profit is no longer the top priority.

The bill repurposes more than $200 billion in pandemic relief. The package redirects money once dedicated to expanded jobless benefits, small-business loans and other emergency aid. Some fiscal watchdogs say the supposed savings are budgetary gimmicks. As aid expires or is redirected, the economic challenges from a surge in the Delta variant of the coronavirus cloud the economic outlook for the months ahead.

Cryptocurrency advocates are fretting. A provision intended to raise about $28 billion in taxes from crypto transactions sent lobbyists scrambling. Despite already winning some concessions, crypto supporters said the language in the bill would define most participants in the sector as brokers, including Bitcoin miners, prompting onerous tax disclosures.

The coronavirus could delay the bill’s passage. Senator Lindsey Graham, Republican of South Carolina, announced yesterday that he had tested positive for the coronavirus. (His symptoms are mild, which he attributed to being vaccinated.) He has gone into a 10-day quarantine, and if infections spread to other supporters of the bill, it may cost the votes required to pass the legislation, delaying a vote into the Senate’s planned August recess.

The White House is trying to slow evictions after a federal moratorium expired. Key to the effort is encouraging states to speed up rental assistance: So far, $3 billion has been dispersed from a $47 billion fund authorized by Congress in March.

New York urges businesses to require vaccines, while other cities and states reimpose mask mandates. As the Delta variant of the coronavirus surges, Gov. Andrew Cuomo said it was in the “best interest” of bars and restaurants to mandate inoculations for admission. Elsewhere, Louisiana and San Francisco reintroduced indoor mask mandates.