Overnight loss of income from core clientele plunges the marginalised group into depths of anxiety and deprivation. 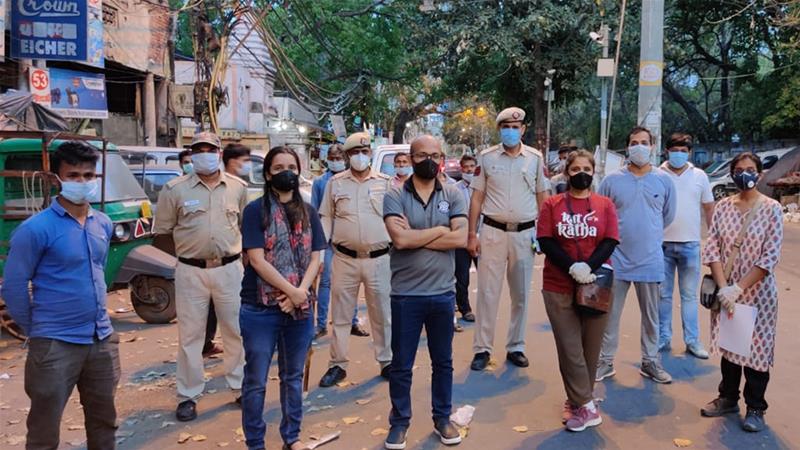 Mumbai, India – The Indian government’s decision to impose a strict lockdown in an attempt to curb the spread of the new coronavirus last month has triggered a mass exodus of migrant workers from cities as economic activity came to a standstill.

But for thousands of sex workers living in cities across India, there is nowhere to go. The loss of income overnight has plunged one of the most vulnerable and marginalised groups into the depths of anxiety and deprivation.

Bani Das from Kranti, an NGO that works with the children of sex workers in Mumbai, arranged a pass from the police and rushed to the narrow lanes of south Mumbai’s Kamathipura, one of the oldest, biggest and densest red-light areas of India.

When she got out of the taxi, women emerged from their homes and crowded around her. “My heart sank. I only had 100 ration packets but the number of women coming for them grew in several hundreds,” she told Al Jazeera.

The police kept making announcements, asking the sex workers to keep a distance, but it was not possible. Minutes later, the ration was over.

The country of 1.3 billion people descended into chaos following the March 24 announcement to impose the lockdown at four hours’ notice.

The government of Prime Minister Narendra Modi justified the decision, saying it was necessary to stop the coronavirus from spreading. As of Saturday, India had 8,446 positive cases and 288 deaths.

On April 8, the Global Network of Sex Work Projects and UNAIDS released a statement highlighting the hardship and discrimination faced by sex workers in this time, urging countries to ensure that their human rights be respected and fulfilled.

The statement read: “… Whenever and wherever possible, sex workers are responsibly self-isolating in response to governments’ calls. However, when they are excluded from COVID-19 social protection responses, sex workers are faced with putting their safety, their health and their lives at increased risk just to survive…”

‘Informal of the informal economy’

The government announced a $22.5bn relief package for the poor but it is not clear if it will benefit sex workers.

For now, aid in the form of cooked food and rations is largely supplied by local non-profit organisations and individuals, with the help of local governments and police.

“Sex work is like the informal of the informal economy. There is nothing for them at the moment. In the interest of the larger society, the government needs to proactively do more things for the community,” said Trina Talukdar, a co-founder of Kranti.

Sex work in India is governed by the Immoral Traffic (Prevention) Act, 1956. It is currently illegal to solicit sex sale in public and to organise commercial sex.

While there are no official figures, the number of sex workers could be anywhere between 1.25 million and 3 million. Activists believe this to be a conservative estimate.

The core clientele has traditionally been migrant workers, truck drivers and other men who are away from their families. Given that this group is also grappling with the horrific economic effect of the lockdown, sex workers – themselves daily wage earners – are staring at months without business.

Nearly 1,400km (870 miles) north of India’s financial hub of Mumbai, lies Garstin Bastion Road, popularly known as GB Road – the biggest red-light district in the capital New Delhi. It is home to 78 brothels where 2,225 women stay, according to NGO Kat-Katha that works with sex workers and their children.

NGO officials say about 1,200 women are still in brothels, while many of them left for their homes as business declined following the lockdown.

On regular evenings, Sunita* (name changed for privacy) is very busy. But now, the unusual lull post 6pm is unbearable. “I have never seen something like this. Now in the evenings, we watch TV, play ludo and do things to keep ourselves busy,” the 45-year-old told Al Jazeera.

Maintaining social or physical distance – the key to preventing the spread of coronavirus – is a luxury as she shares her brothel accommodation with 15 other women and 10 children.

“My priority is to stay safe. We will make do with whatever food we get, but I want to get out of this situation as soon as possible. I want to fund my daughter’s education and get her married. She has dreams of becoming a police officer,” she said.

The financial situation is made worse because sex workers often have no savings. Now, with no liquid cash coming in, they fear not being able to pay rent and end up without a place to live.

Some of them pay daily rent to brothel owners, and others give a cut per customer.

In the eastern city of Kolkata, like elsewhere in the country, requests are being made to owners to relax the rent for sex workers for three months at least.

“There is no way they will be able to pay in these conditions. Homeless people are being put in shelters, but nobody even acknowledges the existence of sex workers,” said Urmi Basu, founder trustee and executive director of New Light Kolkata – an NGO working with sex workers.

Kolkata is home to some of the biggest red-light districts in the country, including Sonagachi and Kalighat.

The National Commission for Women, a statutory body concerned with advising the government on policy matters affecting women, has decided to look into the issue of sex workers.

“We have heard that they are not getting ration due to the lockdown. We will raise the issue with concerned officials and develop a strategy. This will also include sensitisation,” NCW chairperson Rekha Sharma told Al Jazeera.

In most red-light areas in urban centres, multiple women live together in squalor, in tiny 3×3.7-metre (10×12-foot) rooms. Dilapidated brothels stand cheek by jowl on narrow streets, where social distancing is impossible to follow.

“Can you imagine 50 people using one public bathroom? Often there is no water,” said 23-year-old Sandhya Nair, the daughter of a sex worker who grew up in Kamathipura.

“How do you keep space and maintain the required hygiene?” said Nair, who studies in New Delhi but is currently based in a shelter home in Mumbai.

She also wondered if anybody was bothered about an even more marginalised section of society, the trans sex workers. “When will sex workers be seen as human beings whose basic needs deserve to be met?” she asked.

Access to healthcare has become increasingly difficult due to the coronavirus scare. Many sex workers have diseases. There is an especially high prevalence of HIV-positive and tuberculosis cases.

“Last week, one of the women in Kamathipura started throwing up blood. No hospital was willing to see her. Eventually, a local doctor gave her medicines, but she needs to undergo more tests,” said Nair. 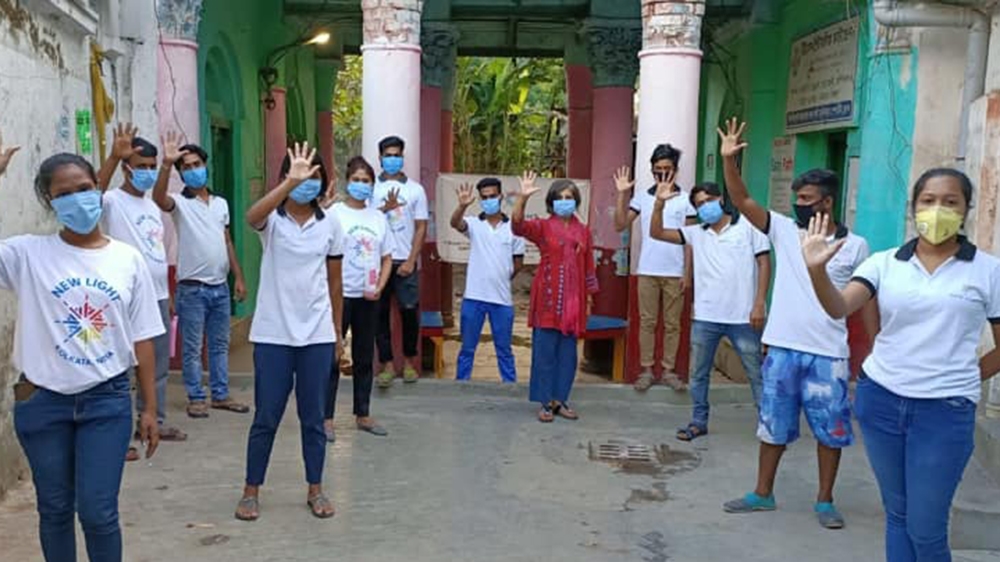 Both said discrimination was not tolerated. “A patient is a patient. Health posts, dispensaries and community health centres are open to everyone,” said Shah.

Acharya said MDACS makes sure that antiretroviral treatment reaches everyone in need if they cannot collect it. “We have also launched a helpline make it easier for HIV-positive patients to access medication,” said Acharya.

Gitanjali Babbar, Kat-Katha founder, said there is a lot of tension and in-fighting within the confined spaces of these brothels.

“On top of that, there is the feeling of scarcity and joblessness. In the coming weeks, we will have to address their psychological problems.” 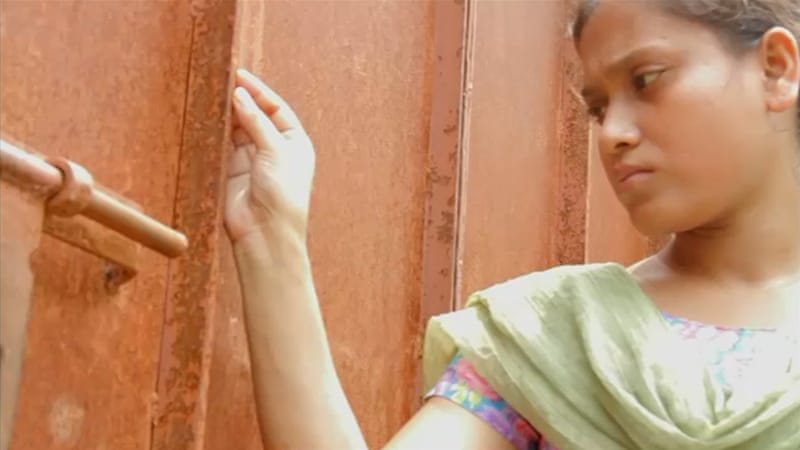 Rewind: Daughters of the Brothel