Footage from Iran has captured riot police appearing to engage with protest action which has called for an end to the fierce regime under the country’s Supreme Leader. As a large group of activists move along a street in Iran, security forces can be seen holding their helmets and shields at their side as they walk alongside the crowd. The news comes amid reports of violent clashes between protesters and riot police in other areas of Iran as the unrest continues to escalate.

The footage, filmed from a building above the active demonstration, shows riot police calmly moving within the crowd. The officers are not wearing their helmets and do not appear to be using their riot shields to force protesters back.

In what appears to be a friendly exchange, one security officer pats a man on the back, seemingly encouraging him to move forward with the rest of the protest group.

Other riot police talk with members of the demonstration and the clip does not capture any instances of violence.

The video was shared by writer David Patrikarakos on Twitter, who captioned the video: “Incredible scenes. Riot police uniting with protesters against the regime.” 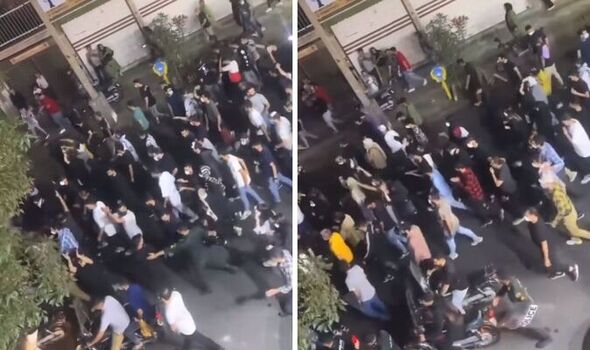 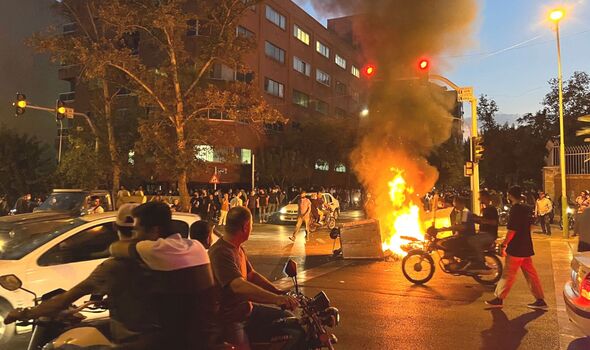 Iranian authorities have been rocked by widespread unrest following the death of a 22-year-old woman in police custody.

Mahsa Amini died in a detention centre after being arrested for showing her hair in public, a breach of Iran’s strict laws on public vieling which requires women to cover their heads.

Eyewitnesses claim Ms Amini was beaten in a police van after her arrest and suggested her death was a result of brutal injuries inflicted upon her by Iran’s morality police force.

However, officials have denied these claims and suggested Ms Amini died of “sudden heart failure” related to a preexisting medical condition. The woman’s family has disputed this report. 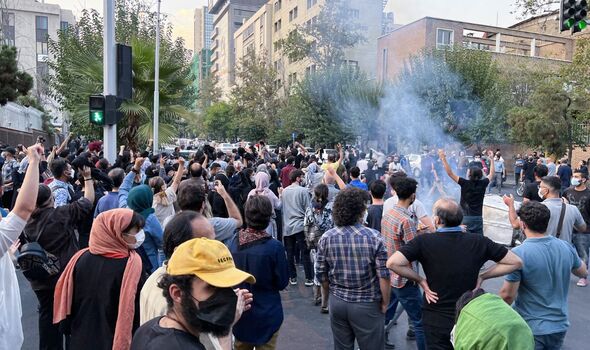 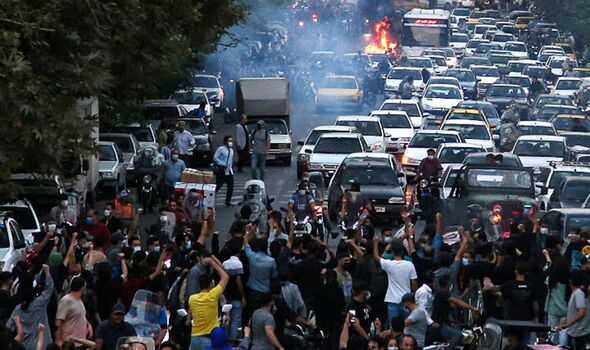 In an alarming development in the unrest, a state television broadcast was hijacked by a protest group on Saturday.

A news programme was interrupted for a few seconds in which an image of Supreme Leader Ali Khamenei surrounded by flames was shown to viewers.

The hijacked broadcast also displayed images of Ms Amini alongside other women that have reportedly been killed by security forces for their involvement in recent demonstrations.

A caption alongside the images read: “Join us and rise up.” 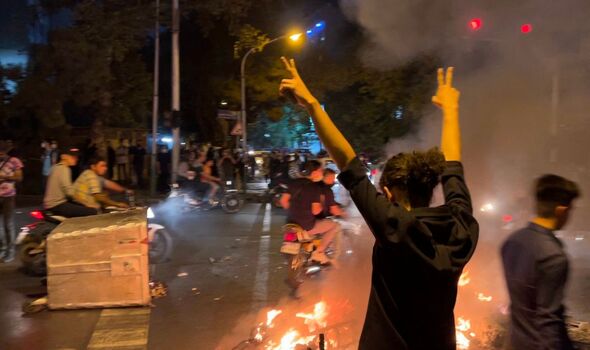 On the same day, unrest in Sanandaj and Saqez turned violent after protesters clashed with riot police.

Security forces used tear gas in an attempt to disperse the crowd before officers reportedly opened fire on the protesters. One man was shot in his car after he honked his horn in support of the surrounding protest.

Human rights groups have suggested more than 150 people have been killed since the protests against the Iranian regime began on the 17th September.

The Iranian Government has condemned the unrest and blamed the Biden Administration of the United States for encouraging protests in a bid to “weaken Iran’s stability and security.”